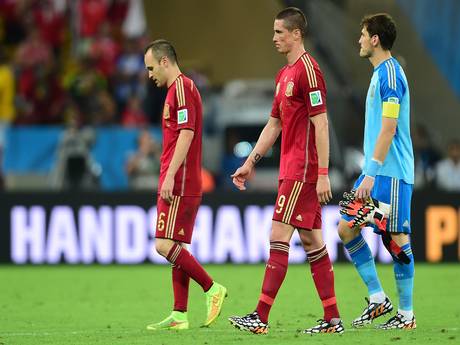 The End of Tiki Taka?

The elimination of Spain from the 2014 World Cup today is not just the end of their tournament – it’s the end of a dynasty, and arguably a style of football altogether. Embarrassingly losing 5-1 to Netherlands last week proved not to be a one-off, as the Spaniards saw defeat again today against a Chilean team, who going into this tournament would not have been expect to beat Spain as they so casually did.

Since 2008, Vincent del Bosque and the Spanish players have graced the football world with their famous ‘tiki taka’ style of play. The style consists of quick, short passes, strategic movement, and an emphasis on possession. The idea is to essentially move the ball from one end of the pitch to the other through a succession of small passes, working the ball through various lanes, and essentially walking the ball into the net. It is this unique style of play that arguably won Spain their 2008 Euro Cup, their 2010 World Cup, and their 2012 Euro Cup. It’s also this style, it appears, that has left Spain with 7 goals against, 1 goal for, and the first team packing their bags for home this year.

Tiki Taka does take a lot of criticism, as it is not an attacking style football that gets people off their feet, nor does it create a lot of chance to awe the crowd. Though when used correctly, as we’ve seen in the past with Spain and Barcelona, tiki taka is almost poetic, showing the creativity of the players, weaving in and out of each other, playing beautiful one and two-touch football. While the argument stands that it does not create chances or a whole lot of excitement, there is no arguing that Spain playing with six midfield and no forwards won them their 2012 Euro Cup.

When Spain and Netherlands kicked off last week, very few people expected Robin Van Persie, Arjen Robben, and the rest of the Dutch to be able to beat Spain, let alone beat them as emphatically as they did. The general consensus was that with such a strong midfield and such a strong understanding of their style of play, the Spanish would be sure to win. However, as the Dutch came out, their fast-paced, counter-attack style, proved to be too much for Spain who continued to rely so heavily on possession. But even with Spain containing most of the possession at 57%, it didn’t matter. Dutch were able to run with the counter attack, exploit the midfield, and create space on their offence. This led to them having twice the amount of shots on target as Spain.

Using the Dutch as a model, the Chileans came out and did the same thing to Spain. They ran on the counter attack, worked to break up possession, and didn’t allow the Spanish midfield to control the game. Like a one-trick pony, Spain has been figured out, and their tiki taka era has come to and end.

How does one team cause the collapse of an entire style of football? It doesn’t. But when the best in the world can’t do what they’re supposed to be best at, it doesn’t leave much hope for the rest. We saw it’s initial collapse with Barcelona this season losing to Atletico Madrid, who ended up going to the Champions League final. Much like the Spain National Team, Pep Guardiola and Barcelona embrace the possession play. Atletico was able to counter this with their aggressive, tackling-focused, attacking play. They didn’t have to have more possession to win the game. They were able to attack quickly and cause chaos, which led to the breakdown of the opponent’s midfield and defence.

Spain will now have to consider the future of their National team. Does Vincent del Bosque, the man who perfected Spain’s style and won them a World Cup and two Euro Cups, stay? Players like Xavi and Iniesta are the foundation of their style, and without them, theres no doubt that Spain would not have been as successful as they are. Though with both players in their 30’s and nearing international retirement, where does the future of Spain’s style lay? Spain have a lot of questions to ask of their football future, and have four years to prove that they are still one of the best in the world at the beautiful game.

Like anything in life, you have to evolve or dissolve. It’s simple Darwinism. Spain did not evolve, and continued their same philosophy for six years. Those six years gave us some of the best football the world has seen, though it seems that it has all officially come an end. And while Spain may be packing their bags already, I have no doubt that they will be ready to compete by the next World Cup, with or without their tiki taka.