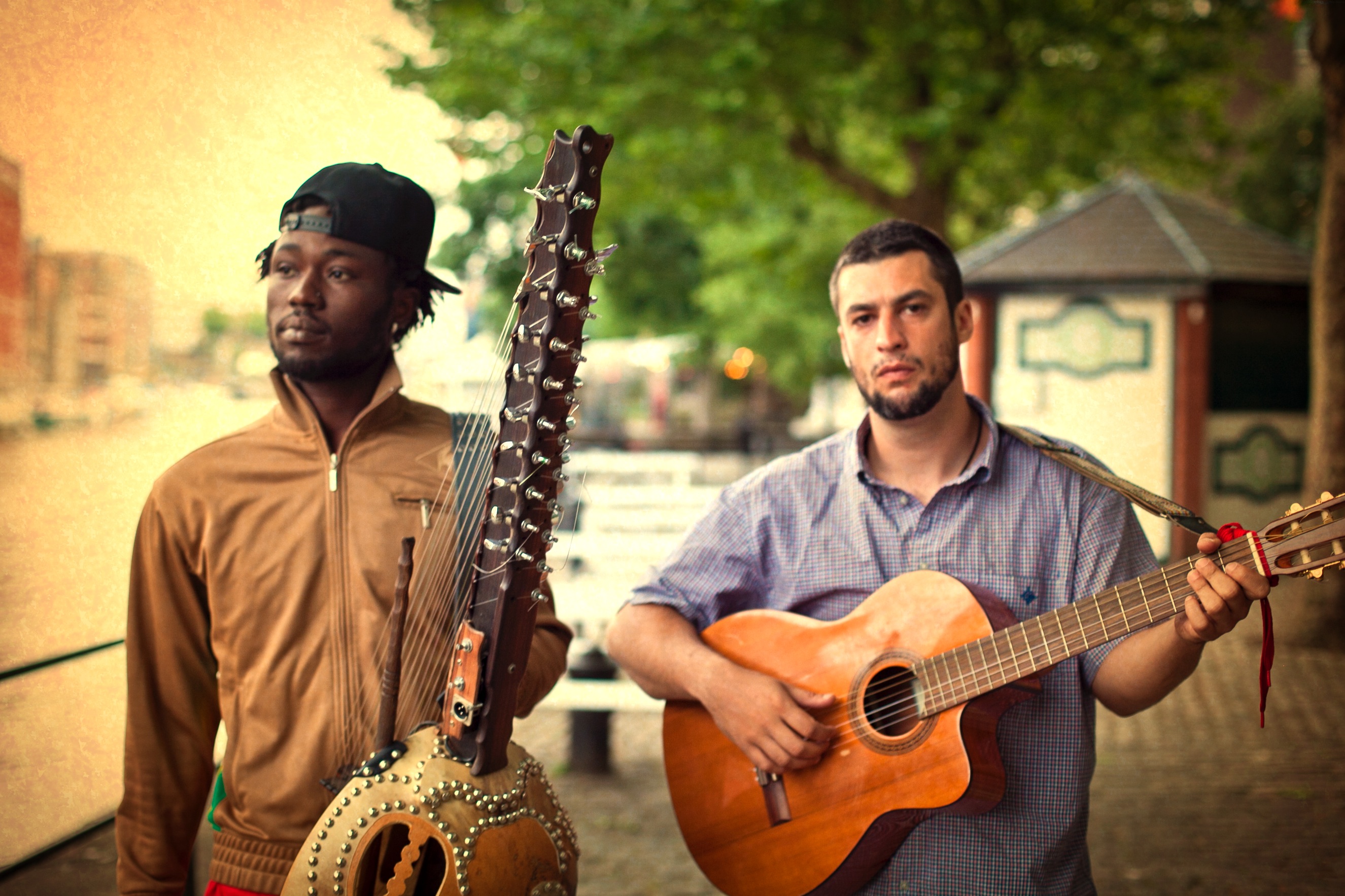 The Global Future of Music

What happens when you let musician loose in the world – playing, crossing paths..?

Over the last several years, it hasn’t escaped my notice that my favourite new releases have involved multi-national/cross-cultural/genre hopping and generally unclassifiable musical styles. I couldn’t resist asking about the genesis of a couple of the albums I keep listening to over and over.

Opportunities can be set up, but they don’t always turn out nearly as well as the meeting of musical minds between American DJ Joe Driscoll and Guinean kora phenom Sekou Kouyate that culminated in their recent release Faya (Cumbancha Records – February 18, 2014).

The album includes songs with lyrics in French, Susu (a language native to Guinea) and English and seamlessly blends styles and genres into a danceable collection driven by West African polyrhythms and hip hop energy. Sekou’s playing goes from that silvery, mesmerizing quality you might expect if you’re a fan of traditional kora music all the way to rock licks and distortion pedals – innovations he was criticized for early in his career.

Born and raised in Syracuse, NY, Joe Driscoll took his beatbox and guitar and headed for the U.K. in 2005 and ended up touring the world for seven years. It was at the Nuit Metis (Mixed Night) festival in Marseille, France where he was first introduced to the musical Kouyate family in 2009. Festival organizers set up a meeting. “I jammed a little bit with Sekou’s brother,” Joe remembers. The results were already exciting. “They knew it could be dangerous,” he says.

The following year, in 2010, Joe jammed with Sekou. “The minute he started playing, I thought, this guy is just amazing.” The Kouyate clan in Sekou’s native Guinea in West Africa is a griot clan – a family of musicians. “The griot style – his percussion skills blow my mind,” Joe marvels. “It’s like Star Wars – you start ‘em young.”

Although their meeting had been facilitated, the musical process between Joe and Sekou was entirely spontaneous. “I left the dictaphone on the table,” Joe says. “The reason I wanted to go to the studio is that I heard the recording and heard eight or nine songs there.”

Once in the studio, those improvisations began to take shape. “We both had these sketched out phrases. First we used the loop tape,” he says. “We’d colour it. We’d build these tracks.”

Welcome to the Ritmo Machine (Nacional Records) has been one of my favourite CDs since its release in November 2011. It’s the musical alliance of percussionist Eric Bobo (Beastie Boys, Cypress Hill) and Chilean DJ Latin Bitman, an infectious fusion of hip hop, electronic and Latin music, digital and instrumental. Among its range of influences, there is a distinctly South American flavour to the music that shows up in elements like the Andean flutes in La Calle (which also features Sick Jacken and French-Chilean rapper Ana Tijoux) and the nod to classic Brazilian samba in the song Brazil.

“I was recording some new music,” Eric Bobo recalls, “wondering, who would I like to collaborate with?” It turns out that he and Latin Bitman are label-mates at Los Angeles-based Nacional Records and something in his tracks caught Eric’s ear. “When I reached out to Bitman, it was out of mutual respect.”

At the time, he was only thinking about recording a single track with the Santiago-based mix master. The project grew as they began to work on it; Eric in Spain with Cypress Hill and DJ Bitman in Santiago. Their enthusiasm grew as they talked out some ideas. “Cypress Hill was playing Lollapalooza in Chile – so was Bitman,” Eric says. They seized the opportunity. “We met four hours before we played.”

Eric was going on to Argentina. “I said, hey let’s book some studio time. Let’s go to Argentina and spend six days together.” The result is Welcome to the Ritmo Machine. “We really came up with something we could be proud of.”

“I never really wanted to pigeonhole myself in one particular genre. Sometimes the fun of it is seeing what came come out of where you least expect. We were able to reach different genres in the record,” Eric notes. “We wanted to make a piece that was contemporary. Even five years from now, you can listen to it and it will still sound fresh. Anything that comes from the soul, it stands the test of time.

We had to just wait and find the right song to set the tone – the first single which was Maestro,” he says.

When creativity sparks cross cultures, it’s the music itself that becomes the predominant method of communication. “He speaks a little English, I speak a little Spanish,” Eric says. In the case of Faya, Joe speaks neither French nor Susu, and Sekou’s English is minimal. The old adage is true – music really is the universal language.

“I think it’s a great thing,” Eric says. “It’s organic; that’s the thing about music. Getting out of our comfort zones was a good experience.”

“It’s music without frontiers,” Joe says, not that he was any stranger to eclectic musical associations. “I never stuck to boundaries of what music was. Sekou – he was working with jazz and rock musicians.” The melding of genres is simply the by-product of the process. “There was never the thought, ‘hey, we’re mixing traditional and modern music’,” he says.

While Joe and Sekou are touring in support of the new album, Eric and Bitman are starting to think about a second release in 2015.

There are many such collaborative projects happening all over the world. In Toronto, Madagascar-born, Russian-raised Donné Roberts has collaborated with Aboriginal singers and musicians and in France, the hauntingly beautiful musical pairing of Malian kora player Ballaké Sissoko and French cellist Vincent Segal (and others) produced the album Chamber Music – just two on a long and growing list.

If you listen closely, I think you’ll hear the future.