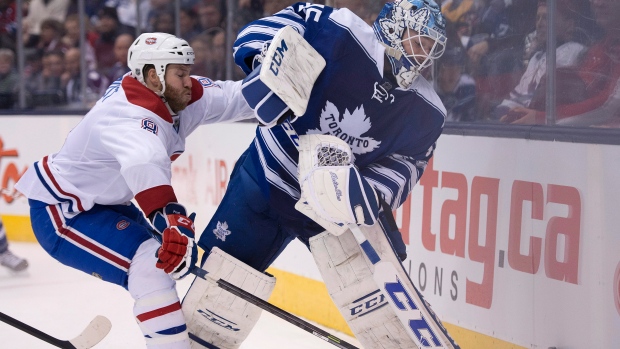 Following a disastrous week in which the Leafs dropped four in a row – two by eye-watering margins – and sparked fearful memories of a cliff-bound 18-wheeler, the Leafs answered with a season-high four game win streak capped off by an impressive 5-3 win over the Canadiens on Saturday.

In collecting all 8 points up for grabs, the Leafs momentarily put their detractors at bay and staved off the mounting pile of smug comments about regression, unsustainable shot differentials, and impossible goaltending catching up with them. The fact is, if this Leafs season falters (and it’s constantly perilously close to doing so), it will ultimately be measured by the playoffs-or-bust benchmark. So as long as the wins keep rolling in, the blue and white will let advanced stats and predictive models be damned.

Unfortunately for fans, the Leafs leaned heavily on all of their worst habits this past week. The team required the shootout to eke out wins against the Devils and Sabres, two teams languishing in the basement of their divisions. In Tuesday’s thriller against the Bruins, the Buds were thoroughly outplayed in the first and third period, and happily reverted to the ‘turtle and surrender’ strategy in the game’s final minutes that served them so well last spring.

Despite these enduring woes, there was a lot to like over the past four games beyond a padded win column. There was some resurgent play from a number of depth players and a return to form for their stars.

We had a third line?: Too much of the conversation around the Leafs’ depth this year focused on injured centre David Bolland. But in Peter Holland, the Leafs have a large talented centre who’s been woefully underused by Carlyle. Since getting called back up last week and before Clarkson went down with an elbow injury on Friday, Holland was responsible for a strong third line that looked as impressive as it has all season.

The Dream: ‘Nazeem the Dream’s too often looked like he’s been sleeping through his games centring the second line. Without him playing to potential, the second powerplay unit’s been a bust, and the production of Raymond and Lupul’s fallen off markedly since a sizzling start. In Saturday’s matchup, Kadri added a physical presence and looked like a whiz with the man advantage. The Leafs will need much more of that to extend this win streak.

The 4th man: For whatever reason, Carlyle refused to play Jean-Michael Liles all season in favour of tweedle-dee and tweedle-dum players Paul Ranger and Mark Fraser. By dishing Liles for Gleason, the Leafs have finally found a stay-at-home Dman who can eat valuable minutes on the second pairing and let the free-wheeling kid pairing of Reilly and Gardiner rip up the opponent’s depth lines. He’s been a welcome dose of reliability to the defensive core.

There was still plenty not to like about last week, and even more that needs to improve in order for the Leafs to keep this win streak going as they head out onto the road for a season-high four game trip against some stiffer competition like the Avalanche and Stars.

‘Time to focus’: It’s got to be disheartening when pundits around the league applaud your drastically reduced play time as a smart coaching move. With Jay McClement getting bumped from the 3rd line to ‘focus on the penalty kill’ the Leafs looked like a much more dangerous team all-round, leading anyone to wonder why he was eating up 19 minutes a night before his demotion.

Playing to potential: For too many years now we’ve heard the Leafs brass lament that this is a talented team that isn’t ‘playing up to it’s potential’, with GM Nonis most recently flogging that tired horse on Thursday with TSN Radio. If the Leafs don’t make the playoffs, look for this ‘potential gap’ to fall on Carlyle’s shoulders.

Benchwarmers: The Leafs have one of the most pointless fourth lines in the league, second only to Tortorella’s combo of rarely-used pugilists in Vancouver. They play barely more than 5 minutes a night, and with the intensive Olympic schedule it’s a growing concern that this lack of depth with put extra wear on the top lines.