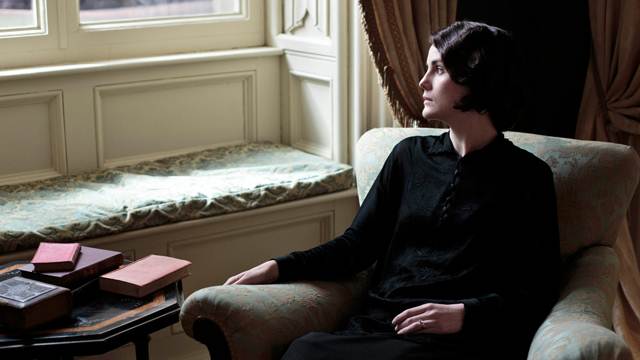 Downton Abbey’s season premiere had a lot of things going on, but the problem was, I only cared about half of them. The show has always had the challenge of balancing its large ensemble cast. That challenge was obvious in the season premiere, where there was the usual cast, a few new faces, and several returning characters who really had no reason to come back.

The episode started with the departure of O’Brien, who snuck out in the middle of the night to take another job. She was soon replaced with Edna, who had appeared previously on the show, but was quickly fired after aggressively pursuing Branson. Edna annoyed me when she was on the show, and she still annoyed me when she came back. Since Siobhan Finneran decided not to renew her contract, obviously the show needed someone to be the new lady’s maid, but did they really need to make the new lady’s maid the new resident trouble maker too? Bringing Edna back felt incredibly forced. What are the odds of hiring two scheming devil incarnates for the same position? She’s basically O’Brien from season 1, with her manipulative plotting with Thomas, and it feels tired. O’Brien was a character I loved to hate, but Edna I just flat out hate. Have we learned nothing about bringing back fired servants? This is just like Ethel’s storyline. Please stop firing unlikable maids and then bringing them back again and again.

Another storyline that needs to be tied up, and tied up quickly is the love…it’s not a triangle, it’s not really a shape. It’s more like a bunch of squiggly lines. But the mess between Daisy and Ivy and Jimmy and not Jimmy (his name is Alfred, but I had to look it up, and spent the entire episode calling him ‘not Jimmy) is tiresome at this point. Ivy, Jimmy and Alfred are some of the newer characters from last season, and I always found it difficult to get invested in them, because all they seem to do is flirt with each other. Daisy has fortunately been around long enough that I’m attached to her, so I somewhat care about the outcome of this situation, but only if they resolve it quickly. I think I could actually like the other three players of this romance drama, if they were given plotlines other than this romantic mess.

There was also the return of Mr. Grigg, an old acquaintance of Carson’s. He’s another character that I don’t know why they decided to bring back. It seemed like that arc was wrapped up, in season 1, but apparently not. It did delve a little deeper into Carson’s past, and it also helped Isobel find a purpose, but it also felt like it cluttered a very busy episode. The only storyline that felt more jammed in and pointless was the nanny Lady Grantham fired. (Seriously- what was the point of that at all?). I think bringing Mr. Grigg back would have worked better if they had held off on it for another episode or two.

The focus of this episode was the death of Matthew Crawley, which happened in the last Christmas special. Matthew was a central character since the show’s inception, and this episode took place six months after his death. I usually hate time jumps between seasons with a fiery passion, because usually they skip over crucial character development. But in this case, I think six months later was a good time to pick up again. Six months is enough time that life for the household could start to return to normal, but also close enough to the death so we could see the characters (especially Mary and Isobel) grieve. Mary’s story was especially great this episode. Michelle Dockery flawlessly transitioned between Mary’s numbness, her frustration and depression, then her determination to claim her inheritance.

I’m not sure how this season is going to be. I love the prospect of Mary and Branson teaming up to go against Lord Grantham in the managing of the estate. The cast had some good moments. (I’m actually starting to like Rose now.) But my biggest worry is this season is going to be weighed down by an overabundance of characters and recycled plotlines. Maggie Smith’s one liners won’t be enough to save the show if they keep repeating the same storylines over and over again. (I didn’t mention Maggie Smith so far. She was superb, as usual). It feels like Downton is stuck in a rut. Here’s hoping it digs itself out in subsequent episodes.