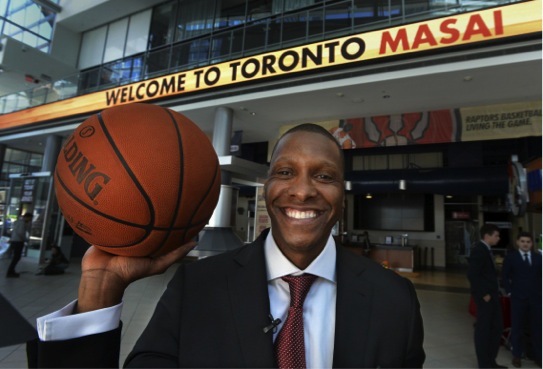 Masai Ujuri was already a recipient of the NBA Executive of the Year award when Toronto lured him out of Denver, and since coming to Toronto he has made a couple of huge trades to shed some cap off the Raptors’ books by dealing away bad contracts former GM Bryan Colangelo had given out. Yes, Colangelo drafted Demar Derozen, Jonas Valenciunous and Terrence Ross; he also traded for Kyle Lowry and Rudy Gay. However, none of these moves took the Raps to the playoffs, and haven’t done so since the departure of Chris Bosh. Colangelo “stepped down” as president and GM of the Raptors which allowed for Ujuri to step into a role in the Raptors front office.

Ujuri took the job on May 31st, 2013 and made his first big move of the year with what was deemed to be an untradeable contract , by sending Andrea Bargnani to the New York Knicks for Steve Novak, Marcus Camby, and Quinton Richardson (although the only one currently on the team is Novak); Novak a three pointer specialist. This trade shed a terrible contract and gave the Raptors some cap space to go out into free-agency and add to their roster.

During free-agency period Ujuri was aggressive and signed Tyler Hansbrough to a two-year deal. Hansbrough, a former 13th overall pick in the 2009 draft, is a big body that will rebound well for this team and has done well early in the season and has a career high 6.1 rebounds per game coming off the bench for the Raptors through the first eighteen games.

Another addition made by Ujiri was adding depth to the guard position by signing D.J. Augustin. Augustin a former 9th overall draft pick in the 2008 draft who has a career high 14.1 PPG in 2010-2011 season , but production has fallen off since allowing Ujuri to sign him to a cheap one year contract attempting to spark his prior success he had back in College where he was a superstar coming out of the draft after lighting up the NCAA at Texas A&M.

Other depth singings were made, but none no bigger than the two mentioned above. However, Ujuri has pulled off the biggest trade of the year thus far by moving recently acquired “star” player Rudy Gay to Sacramento. Gay is headed to the Sacramento Kings along with Aaron Grey and fan favourite Quincy Acy, and the Raptors will get guards John Salmons and Greivis Vasquez, forward Patrick Patterson and centre Chuck Hayes in return. Much like the Bargnani trade, this allows the Raptors to free up almost $20 million in cap next year.

The biggest name in the trade is certainly going the other way from Toronto, but the Raptors may have gotten the better deal. Why? Besides shedding roughly $20-million of cap space, the raptors added much needed depth and especially at the guard position. Grievis Vasquez broke out last season having a career-high 13.9 PPG along with 9 assists per game. This gives the raptors a true #2 point-guard behind Kyle Lowry- and with his issues with health, Vasquez solidifies a good back-up plan. Also coming the other way is veteran guard John Salmons- an absolute wiz on the court. The raps also replace Grey and Acy with the addition of Chuck Hayes- an eight year veteran. Hayes is signed through next season as well ensuring forward/center depth this, and next season.

Masai Ujuri is eighteen games into his tenure with the Raptors and has already pulled off some big moves that have the Raptors looking ahead to the Future. Ujuri has said he is not getting caught in the middle of the pack this year and will find himself either in the playoffs or in the lottery. If the fans had their way they wouldn’t mind the Raptors “tanking” and find themselves with a high lottery pick with the chance of getting Canadian superstar Andrew Wiggins in this year’s draft. How will the raptors season fair, only time will tell. Good luck Masai!