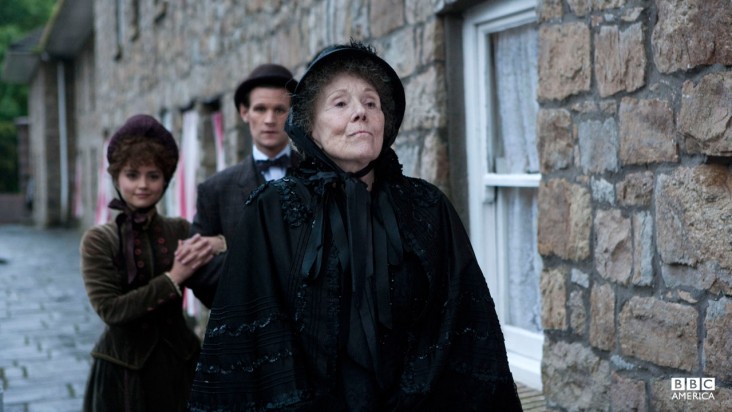 Every season of Doctor Who has an obligatory Doctor-lite episode in which the Doctor and his current companion will occasionally pop up, but the real focus of the episode isn’t a regular character. These episodes tend to go towards extremes. They can be like Season 3’s ‘Blink’, which consistently crops up on lists of best Doctor Who episodes ever lists. Or they can be like Season 2’s ‘Love & Monsters’, which most fans pretend never happened. ‘The Crimson Horror’ falls in the middle of these two.

Certainly helping the episode were recurring characters Jenny, Madame Vastra and Strax. Jenny was the most heavily featured, which is good, because she has the most potential as a character out of the trio. Strax hasn’t been expanded much beyond comedic relief (which is bordering on repetitive by this point), and Madame Vastra is too cool and calculating to be entirely relatable. Since they were used sparingly this episode, these limitations weren’t really a problem. Rounding out the cast. were guest stars Diana Rigg and her daughter Rachael Stirling, playing, surprisingly, a mother and daughter.

Rigg portrayed the villainous Mrs. Gillyflower. She had a mysterious partner, a Mr. Sweet, who turned out to be a prehistoric leech, and ultimately underwhelming. He and Mrs. Gillyflower were supposed to be working together, but he didn’t have any lines, because he was…you know. A leech. There are a lot of human villains on this show that form bonds with dominant alien creatures. In this case, it didn’t quite work when the formidable Mrs. Gillyflower started cooing over Mr. Sweet. That’s not to say that there shouldn’t have been an alien antagonist, but it would be nice to see a human take charge in a human/alien duo. Mrs. Gillyflower’s softness with a glorified parasite (even though she categorized their relationship as ‘symbiotic’) felt silly, given her obsession with perfection.

Other than that quibble, the episode was one of the better ones this season. There were a lot of good one-liners. There was also a flashback that was filmed with a tinted lens and incorporated photography and music to create a memorable sequence. It contributed to the overall ambiance of Victorian times. And while at first I had issue with the Victorian England setting – for a show that can go anywhere in time and space, they seem to go to Victorian England the second most, only after present-day London- it advanced Clara’s storyline, so I got over it. It was also a pleasant surprise that the kids Clara was nanny for figured out she was a time-traveler. Pushy, curious characters have a history of being good ones on this show. They’ll be back next week, in an episode written by Neil Gaiman. Be excited. Be very, very excited.

Other thoughts: I’ve had a lot of complaints this season, but the quantity of quality guest stars has not been one of them. There’s been a slew of awesome British thespians in most of the episodes so far. And this week we got Dianna Rigg, and next week we get Warwick Davis. Keep it up, Who.