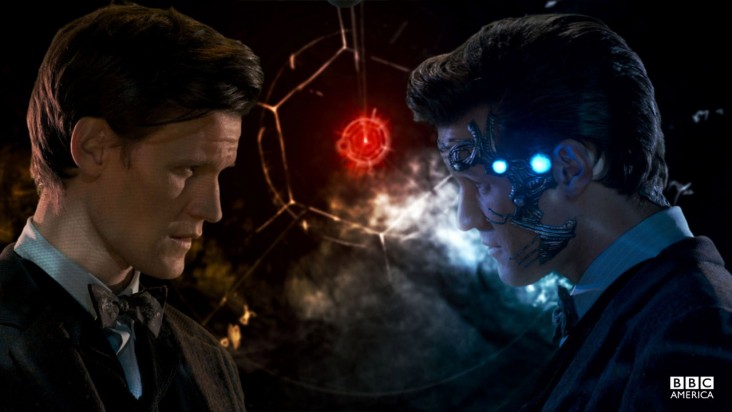 Neil Gaiman returns as a writer to Doctor Who after his wildly successful Season 6 debut. ‘Nightmare in Silver’ didn’t quite live up to the high bar Gaiman set for himself with his fan favorite and critically acclaimed episode ‘The Doctor’s Wife’, but it was still one of the better offerings this season.

The most impressive thing about this episode was Gaiman’s ability to make the Cybermen interesting. The Cybermen, like the Daleks, are classic Who villains that have   become encumbered by their own legacies. They might have been menacing when they first debuted, decades ago, but after so many run-ins, they’ve lost their scare factor. The Cybermen weren’t scary per say, but they had various ‘upgrades’ that made them seem more of a threat, and less of clunky metal pests.

Some Cyber technology attached itself to the Doctor, and there was an ensuing confrontation in the Doctor’s head, between the normal ‘good’ Doctor, and an evil ‘Cyber’ Doctor. (Is it bad that I liked evil Doctor better than regular Doctor? It’s like Angel vs Angelus in Buffy. The villain persona is infinitely more interesting than the angsty one weighed down by a hero complex). The two Doctors were battling for control of the Doctor’s brain. It meant Matt Smith got to pull double duty and have conversations with himself. Sometimes I forget how talented an actor Smith is; the Doctor has felt repetitive of late. But when Smith is given a challenge, he doesn’t disappoint. I hope he gets more chances to show off his range.

Warwick Davis guest-starred this episode. The twist involving his character seemed obvious from the get-go, but his Porridge and Jenna Louise Coleman’s Clara played off each other well. Clara had a lot of time to shine this episode, having to take charge of a platoon as the Doctor was engaged in an intense chess game against himself. I wish (spoilers) Clara had accepted Porridge’s offer of marriage and become empress of a thousand galaxies, because let’s face it, not only would she be great at it, but she would be better off than running around with the Doctor. The finale is next week, and the Doctor still hasn’t told Clara about her past incarnations. It’s not a healthy relationship; Clara trusts the Doctor with her life, but he withholds vital information from her. It’s a pattern that’s starting to become too familiar, and this mentality of ‘Doctor knows best’ when clearly he doesn’t is seriously grating.

I wish this episode had pushed forward the Doctor and Clara’s arc. Clara is at least aware that there’s something the Doctor isn’t telling her, but she isn’t actively pursuing answers. This episode had a lot crammed in, but most of it was an overly complicated plot, instead of relationship progress that really has been lacking these past few weeks.  That isn’t a fault of this episode as much as it is a fault of the show in general. I think I had my hopes set too high when I found out Neil Gaiman was writing another episode and secretly expected it to fix all the problems I’ve had with this season so far, which was unrealistic. ‘Nightmare in Silver’ was a decent to strong episode overall, and I hope Gaiman will return next season for a third Doctor Who outing.