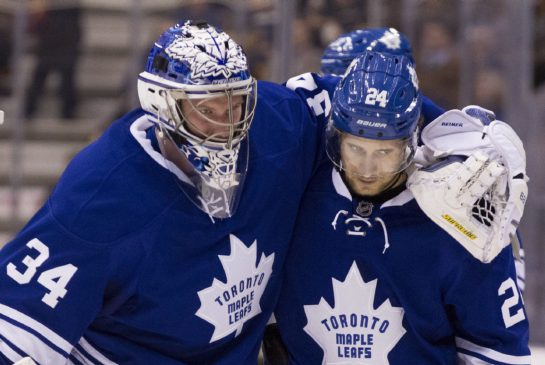 For the first time in nine years, the Toronto Maple Leafs are in the playoffs. I repeat, the Leafs are in the playoffs. If you’re in the Toronto area, you are already very aware of this and I’m sure extremely excited. For any casual sports fans that aren’t actively invested in the NHL, the excitement may seem surprising given Toronto’s status as a longtime ice hockey mecca. As storied as their history is, in the post-lockout era, they have been historically bad.

Their last playoff run, in 2004, ended in two rounds, and the 2003 campaign was halted in the first. These were the last kicks of a contender, the leftovers from the near miracle team of the early 2000’s led by Captain Mats Sundin, star goaltender Curtis Joseph, and enforcer Tie Domi. That team, the scrappy band of misfits that almost made it through the bracket, were the Leafs I fell in love with.

You may ask, why does this US West Coast native give two pucks about Canada’s finest? Growing up, I played goalie and latched onto Curtis Joseph (who will henceforth be known by his true name, CuJo) as a stylistic role model, watching his Edmonton Oilers games as instructional videos. When he signed over to Toronto, I had to follow. I focused on CuJo’s game saving acrobatics, but the rest of the roster soon won me over with their underdog grit and hard nose hustle. Their rivalries, their hatred, became mine; when Bryan Berard went down with an eye injury, I knew the Senators set it up, I was convinced they were the face of evil in ice hockey, second only to the New Jersey Satan.

It was those very Devils that knocked the Leafs out of the playoffs on their way to the Stanley Cup, two years in a row, followed by the Hurricanes doing the same in 2002. No matter how great they were, the Leafs couldn’t catch a break, not in that incarnation. During the offseason, CuJo left for redder pastures with the Wings and then Eddie Belfour came in as a decent replacement, but they’d lost the magic, the mojo. I still tuned in every few games, but Toronto was not the attention grabber it once was. As for CuJo, he took a journeyman’s lap around the league before returning home and retiring with the Leafs, a fitting end to his stately career.

Of course, none of this personal recounting of a decade of a tragedy pertains to the season at hand. What matters is the current squad, fronted by another dominant goaltender in James Reimer and featuring one of the strongest offensive threats, Phil Kessel, that the Leafs have put on ice in the last decade or two. This team is tough, leading the league in fighting penalties, and battling through a mountain of speculation, controversy, and doubt to get to this point. Admittedly, I haven’t been following closely enough to give any real analysis or comparisons, but the spirit seems similar enough to those magical early Willenium years that I am firmly back on the wagon.

The Leafs play the Boston Bruins in the first round, a tough matchup with a bruiser of a team. I’m not here to make any predictions or bold declarations of intent, I am only expressing my sincerest desire: to believe again.