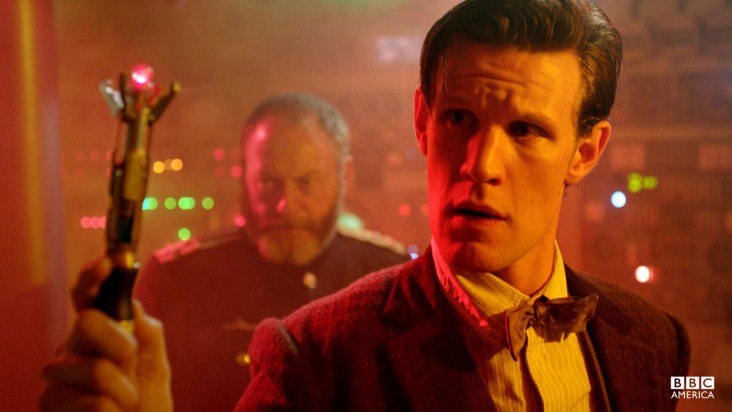 Return of the Ice Warriors

‘Cold War’ is the latest Doctor Who episode this season to harken back to the show’s early days by bringing back a Classic Who monster, the Ice Warriors. Although the episode had some strong moments, ultimately it was filled with forgettable characters and a weak conclusion.

Taking place on a submarine in 1983, ‘Cold War’ had the potential to do a lot with its setting. After the last two episodes, one of which featured breathtaking shots of London and the other which took place in space and had a visually interesting planetary system, ‘Cold War’ was much more contained. It was about being trapped with an alien in a submarine. ‘Cold War’ felt like it was doing too much. (It didn’t help that I kept mentally comparing it to season 4’s brilliant, creepily claustrophobic ‘Midnight’, which is one of the best episodes of the entire series). In this episode, there was a hostile alien (an Ice Warrior) that was killing the members of the crew off one by one, but was also hellbent on destroying the world with the submarine’s nuclear weapons.

Both of the problems ended up feeling rushed. There wasn’t time to create any real emotional attachment to any of the crew members, and the nuclear war plot fell short. Because one crew member attacked him, the Ice Warrior (named Skaldak) decided the entire planet was forfeit. But Skaldak was also trying to destroy the Earth because he was depressed he had been frozen in ice for 5000 years and thought his species was extinct. The solution? An Ice Warrior ship came and picked up Skaldak. Surprise, they weren’t all dead. The Doctor begged Skaldak to show Earth mercy, and he did. There was talk before the rushed conclusion about how he didn’t really want to kill billions of people. But those nukes were armed and ready to go; the solution that the Doctor asked nicely and Skaldak felt like showing mercy felt a little cheap.

I never really got a firm grasp of Skalak’s motivation or character.  He killed crew members to understand human weakness, but you don’t need a brilliant understanding of the human body to kill us all with nuclear bombs. He was a famous warrior, about to end the world before suddenly deciding to let it go. Sadly, the same lack of characterization could be said for most of the crew who died off pretty quickly. Liam Cunningham’s Captain Zhukov was underwhelming. I was so excited when I saw Liam Cunningham was guest starring. (You guys, that’s Sara Crewe’s dad from A Little Princess. Or for you Game of Throners, that’s Davos Seaworth). Sadly, Captain Zhukov felt like a stereotypical naval captain. There was nothing wrong with it, but if you have a performer such as Cunningham, it would have been nice to see the character fleshed out more, or given more to do. David Warner was a surprise as the kindly Professor Grisenko. Grisenko had a mixture of compassion and intelligence and humor that made him a worthwhile addition to the cast.

Jenna Louise Coleman continues to shine as Clara. She gave a believable range of emotions for a girl who is continually thrust in overwhelming situations. Clara’s best moments were with Professor Grisenko as they attempted to comfort each other with humor and banter despite being obviously terrified. It was also nice to see Clara and the Doctor’s relationship continue to grow. Coleman and Matt Smith have excellent chemistry, and it’ll be good to see how it grows from here.

‘Cold War’ wasn’t a great episode, but it wasn’t a terrible one. It felt like it tried to cram too much in. I did appreciate the reintroduction of the Ice Warrior. With the 50th Anniversary looming around the corner (November of this year), it’s great that the show is reintroducing classic monsters that the newer audiences might not have had a chance to meet otherwise. Ultimately, ‘Cold War’ seemed to be in the same boat as the other episodes so far this season- good, but not great.