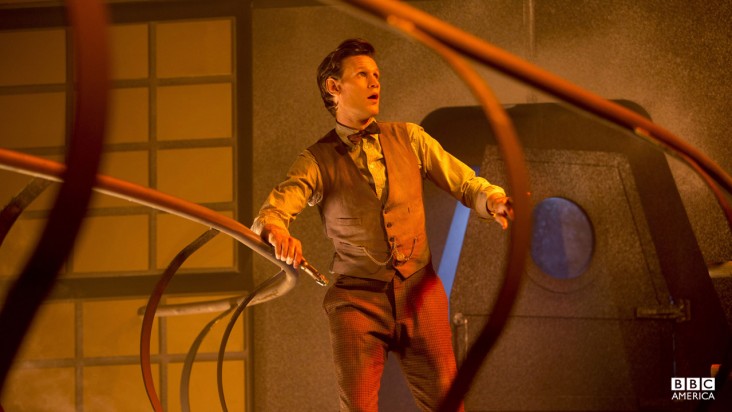 ‘Journey to the Centre of the TARDIS’

The latest Doctor Who episode was an ambitious, though ultimately underwhelming outing. It heavily featured one character (the TARDIS itself), while leaving the other players on the sidelines development wise.

The best part of the episode was seeing more of the TARDIS. Most episodes are restricted to the console room. The only other episode to feature this much of the TARDIS was season 6’s ‘The Doctor’s Wife’, but even that was restricted to a labyrinth of corridors. In this week’s episode, we got to see the oft-mentioned, but heretofore unseen swimming pool and library. It was a good reminder that yes, the TARDIS is a time machine, but it’s a living, thinking machine. Usually the TARDIS saves the day, but this time around, the Doctor had to save it and everyone on board when a crew of space salvagers damaged the ship.

Plot wise, there were plenty of twists and turns to keep the audience guessing. But some of them felt unnecessary, specifically the revelation that the android wasn’t actually an android. It seemed to be an unsuccessful effort to make the three salvagers seem more interesting than they actually were. It’s hard to write interesting supporting character for Doctor Who, when usually they’re in one episode and there isn’t a lot of time to develop them. But plot twists that don’t have an effect on the overall plot isn’t a very good way at creating three-dimensional characters.

It didn’t even matter that the android wasn’t an android, because the Doctor ended up erasing the day’s events, and no one remembered what happened anyway. Clearly, I wasn’t invested in the android subplot, but as far as Clara and the Doctor’s relationship, the memory loss was incredibly frustrating. The Doctor confessed to Clara how he met her multiple times, and that her other incarnations all died. Clara also accidentally found the Doctor’s name in a book. (If it is such an important secret, why wouldn’t you destroy all written records of it?)

Clara and the Doctor’s relationship has reached a point of stagnation. The Doctor wants to know who Clara is, Clara has no idea there’s anything wrong at all. This was the perfect opportunity to progress their relationship and get them both on the same page. Instead of taking that opportunity, they decided to turn the clock around. This was my major problem with Doctor Who last season. When it was faced with difficult choices, and the chance to challenge the characters, it usually took the easy way out. And it’s doing it again. It’s annoying to be taken back to familiar territory, especially if there are only three episodes left this season. Doctor Who needs to stop being a tease, and progress the plot and characters.

Contradictorily, I (futilely) hope that Doctor Who has no real intention of revealing the answer to the show’s titular question. The Doctor’s real name is supposed to be revealed this season. I’m being pessimistic here, but the secret of the Doctor’s name is as old as the show itself. It’s going to be incredibly difficult to have a satisfactory answer to a question that is almost 50 years old. The show is doing itself no favors by continually bringing it up or alluding to it. I’ve said it before, and I’ll probably say it again: Doctor Who needs to stop trying to be impressive. It’s started to focus too much on trying to be clever and mysterious. It needs to deliver interesting characters and plots, and more importantly, progress those character and plot. If it does that, impressiveness will surely follow. As it is, it’s enjoyable, but in the end, forgettable.

Other thoughts: The library had liquid encyclopedias. Encyclopedias that were liquid, just sitting in glass jars. How does that work, and more importantly, where can I get one?