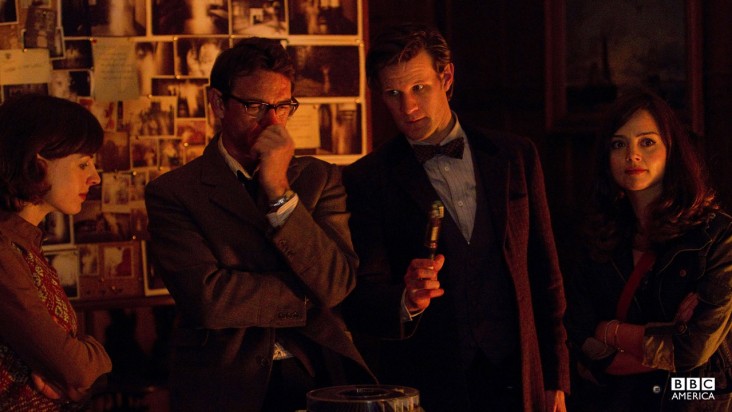 A Return to Form

The latest Doctor Who episode, ‘Hide’ has easily been my favorite episode of the season thus far. Season 7 has felt like it was lacking something. The episodes thus far haven’t been bad per se, but they haven’t been great either. And worse, they seem to be missing a certain intangible quality, a Whoness. ‘Hide’ had Whoness in abundance. It was creepy and yet managed to have an optimistic ending that didn’t feel forced.

‘Hide’ is a ghost story with a sci fi twist. Set in a typical haunted mansion, the Doctor and Clara arrive and assist a professor and a psychic look for a legendary ghost that has been haunting the area for centuries. The ghost isn’t actually a ghost- that would completely go against the established mythology of the show. But that didn’t stop ‘Hide’ (the first half or so at least) from being scary. I’ll admit ghosts and all related things terrify me with little to no effort. But I watched this episode with people far braver and less susceptible to supernatural scare tactics than myself, and they were sufficiently unnerved.

The ending (spoilers) where the alien antagonist was from a pocket universe was actually just trying to get to our universe to get back to its mate was a little cheesy, but honestly that’s what one should expect from Who. The important thing is that the twist didn’t feel forced, and it didn’t take away from the characterization or plot that had been presented to far. What made ‘Hide’ a great episode was it had all the best elements of a Doctor Who episode and it did them well. Scary moments? Check. Banter between the Doctor and companion? Check. (And as a bonus there was a great scene of Clara arguing with the TARDIS). Taking something scary then ultimately presenting a positive outlook on the universe? Check.

The one issue with the episode was the pocket universe. The ‘ghost’ (again, spoilers) was a woman trapped in a pocket universe where time ran differently, being chased by an alien. It’s not exactly a problem, but the show has featured the regular universe, alternate universes, parallel universes, bubble universes, and now pocket universes. Calm down, Doctor Who, and take it down a notch. The rules for all these different universes aren’t explained concretely, so it feels like they could use a consistent terminology instead of inventing a new type of universe then discarding it after one episode. Still, the pocket universe worked in the context of this episode; it’s only when looked at as part of the whole series that it becomes a little thorny.

‘Hide’ did do a good job of incorporating Clara’s overall arc. It brought up the mystery of who Clara is enough to make a point of it, but not enough to be obnoxious. Doctor Who has a history of taking a mystery and beating the audience of the head with it (*cough* River *cough*). Clara’s story is being treated with more care, which is reassuring.

After a wobbly start, the second half of season 7 seems to have finally found its footing. Here’s to hoping the rest of the season continues in this vein.