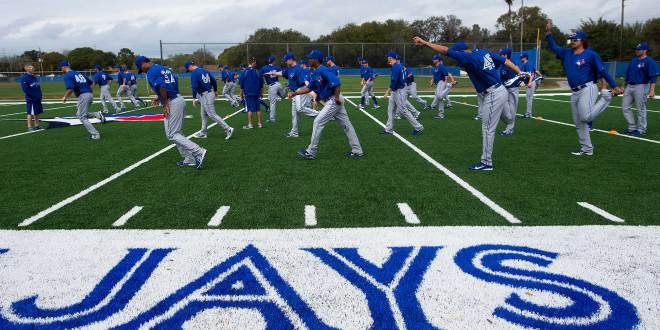 Spring Training is Upon Us

Alex Anthopoulos had an off-season that has the city of Toronto and the baseball world buzzing. Spring training is underway in Dunedin, Florida, and the Jays are ready to begin a 2013 season that is full of hype and hope.

The Jays had a disastrous season last year with a club record of 73-89, by far their worst season in almost a decade. However, they had their fair share of injuries that surely reflect in their record. Jose Bautista went down in mid-July and never returned, which sent the team into a sky fall. Luis Perez was at one point considered their best pitcher coming out of the bullpen, then he too fell to a season-ending injury. Adam Lind was designated for assignment, Ricky Romero had the worst season of his Career… and the list of woes continues. Apart from Edwin Encarnacion’s career year, Toronto was just waiting for October to come as quickly as possible so they could shift their attention to the 2013 season.

Now, the Jays are ready to put that all behind them because this is a new year and a whole new ball club. Alex Anthopoulos (Blue Jays GM) pulled off not one but two trades that changed the entire landscape of this team. Anthopoulos brought in a true leadoff hitter in Jose Reyes, lefty hurler Mark Buehrle, right hander Josh Johnson, speedster Emilio Bonifacio, and the 2012 NL Cy Young winner RA Dickey, without giving up any roster players except pitcher Henderson Alvarez and shortstop Yunel Escobar. Then Anthopoulos proceeded to build a winning team by making depth free agent signings: infielder/utility Maicer Izturis, and outfielder Melky Cabrera.

Barring any injuries, its seems as though the starting line-up on April 2nd will be 1-RA Dickey, 2- JP Arencibia, 3- Adam Lind, 4- Emilio Bonifacio, 5- Jose Reyes, 6- Brett Lawrie, 7- Melky Carbara, 8- Colby Rasmus, 9- Jose Bautista, DH- Edwin Encarnacion. This line has the ability to put men on bases, steal, and put runs on the board.

An element of speed has also been added to the Jays’ roster. Reyes had 40 stolen bases last year while Bonifacio went 20-for-20 before injuring himself in mid-May causing him to miss a significant amount of playing time while on the disabled list; but he still managed to come back and finish the year with 30 stolen bases. JP Arencibia had an average season last year, notching 18 homeruns, and looks like he’ll continue to put up numbers offensively while proving to be “Dickey’s catcher” (Arencibia has expressed interest in catching the knuckleballer this season; a task that is easier said the done).

The Blue Jays’ biggest asset the past few years has been the long ball. The Jays have hit more homeruns the last three years than anyone else in the American League, partly due to the homer-friendly ballpark (Rogers Center). Edwin Encarnacion had a career-high 42 homeruns last season and both he and Bautista have their mind set on the batting title, which they both have been close to in the past. Melky Cabrera had a breakout season last year before being suspended for using PEDs. The Jays took a gamble signing him for two years hoping the reward turns out to be bigger than the risk.

A weakness of the Jays for many years has been their pitching, and the bullpen. Well, that is not the case anymore. The Jays added three arms to the rotation this year- Buehrle, Johnson, and Dickey. RA Dickey, clearly the biggest acquisition of the off-season since he is coming off of a 20-win Cy Young Award-winning season. The Jays gave up their biggest asset in the farm system to get Dickey when they traded Travis D’Arnaud. If Dickey can be as good as he has been in the past three seasons then this could turn out to be Anthopoulos’ biggest trade of his career, right next to the previous trade for Buehrle and Johnson. If Johnson can stay healthy, there is hope he can regain his pre-Tommy John form and become the All-Star pitcher once again. He has incentive to do so since he’s playing for the contract he is due to extend at the end of this season. Brandon Morrow was the only pitcher on the Jays’ roster to win 10 games last season, even though he had a stint on the 60-day disabled list. The Jays need Morrow to stay healthy this season and get through the entire 162 game campaign to help them get to the playoffs and beyond. From Ace to 5th starter went Ricky Romero. Romero had his worst season of his career last year, posting a 9-14 record with a 5.77 ERA. Romero hasn’t technically been demoted, but with the acquisition of the new pitchers he finds himself as the 5th starter in the rotation. By stepping out of the spotlight and relieving some of the pressure, hopefully Romero regains the game we saw back in 2011 when he pitched his way onto the AL All-Star team.

This season the Blue Jays are favoured to win the World Series in most Las Vegas books. However, it is a 162-game season and anything can happen. The key to success is health. If the Jays want to get a crack at the playoffs they must remain healthy. April 2nd is coming quick and it’s only a matter of time before the 2013 baseball season is under way!