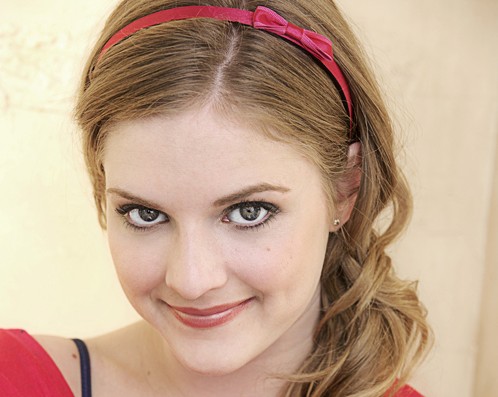 We’re obsessed with Amy Sherman-Palladino’s affable ABC Family hit about a small-town ballet school run by Emily Gilmore and Millie (the Thoroughly Modern one). We’re particularly obsessed with the fiesty foursome of teenage ballerinas who’ve become very much the heart of the show and some of the most relatably honest young characters on TV. Kaitlyn Jenkins plays Boo, an early standout for her sweet disposition, comedic chops, and earnest struggle to be taken seriously as a ballerina.

Now that the show’s fantastic 18-episode first season is over, and with the fate of a potential season two still up in the air, the adorable Best Young Actor nominee found a few minutes to answer our questions about the show, the choreography, working with  Amy and Sutton, and falling for Carl (Boo’s unexpected and utterly adorable love interest).

Do you remember the first ballet you ever saw?
Actually I do remember. My mom took me to my first Nutcracker performed by The Joffrey Ballet when I was only four and a half. I mostly remember the pretty tutus from “Waltz of the Flowers” and the Shirley Temple she got me at intermission. I still always get one whenever I go to the ballet!

What performers have always inspired you?
There are many performers in both dancing and drama that I admire, but the ones that inspired me the most are the great ballet dancers Diana Vishneva and Desmond Richardson. Maybe it was because I grew up watching their unforgettable performances. Every time I watched them they brought such unique depth and lovely artistic qualities to their performance that it inspired me to emulate that in my own dancing.

Do you have a favorite ballet or choreographer?
Swan Lake has always been my favorite ballet. It has been a dream of mine ever since I was a little girl to perform something from it and when I did Youth America Grand Prix I did do one of the variations from the ballet.

As for choreographers I love Sonya Tayeh and Mandy Moore of SYTYCD fame. Sonya amazes me with her ability to bring innovative, unique ideas to her choreography and I really believe she is the next genius choreographer of our time. Mandy Moore is wonderful too and I would love to be in any piece of hers because I think her style is something that I could perform well.

Tell us about the process of auditioning for Bunheads.
The audition process was pretty intense, stressful, and exciting all at the same time. We had to prepare a one minute choreographed piece and two scenes from the pilot for the first audition. Each audition I had to dance and there were five auditions all together before I learned I landed the role of “Boo”. One of the coolest parts was having Amy Sherman-Palladino choreograph and teach us a jazz number to a Beatles song for the last dance call back! She gave us corrections and really helped out every girl in the audition. She was terrific and boy does she have some awesome moves!

Did you ever watch Gilmore Girls? What is it like working with Amy?
Gilmore Girls was on when I was in my early teens and I was kind of more into the Disney Channel shows at the time. Once I landed this role I did start watching as much as possible. I found it so helpful because it gave me an insight into Amy’s writing style, pace, and character development.

At first Amy made me nervous because I was so worried about doing a good job, but the more we worked together the more comfortable I became, and Amy makes being on set fun! The first day of filming was my twentieth birthday and she made it special with cupcakes and flowers! I admire that she is a real professional that expects excellence, not perfection, from her actors, and I could never have hoped for a better director to work with on my first project. She has been so encouraging, patient, and inspiring. I count myself one of the lucky ones!

What about Sutton Foster- is she as fun as she seems? Had you ever seen her on Broadway?
Sutton is MORE wonderful than she seems! Words cannot begin to describe how much I admire her. She is the hardest working professional I have ever known, not to mention one of the nicest, and each day she would energize the set with her happy smile. If I ever felt discouraged, Sutton would notice, take the time to stop and give me little pep talk, and give me a hug. I have learned so much by her awesome example of humility, kindness, respect, and professionalism on the set.

I did get to see her on Broadway in Shrek and Young Frankenstein and she was amazing in both. If you had told me then that I would one day co-star in a television show with her I would have said, “Me? No way, you’re crazy!”

Do you have a trick for mastering Amy’s trademark crazy-fast dialogue?
Fortunately for me, Boo isn’t really one that rattles off a lot of quick dialogue. I really admire Sutton and Kelly Bishop for the way they can memorize and deliver their lines so quickly, they have incredible monologues to memorize! Amy has suggested a few tricks to help me master learning my lines quicker but most of the time I try to find a quiet place and keep going over and over them until I get them down.

What are some of the biggest similarities and differences between you and your character Boo?
There are more similarities between Boo and I than differences. Amy once said in an interview, “Kaitlyn isn’t Boo-like, she is Boo” and she’s right. When I was sixteen I was so much like Boo is… a dreamer, a sincere passion for ballet but struggled against her body type, having a goal with sincere desire to succeed, being a loyal friend, and always looking for the best in people. Our basic difference is that I have had a little more time in my life to learn through my challenges and build more self confidence than Boo has. But, I am happy to see Boo starting to grow in that direction during the second half of season one.

Boo’s romance with Carl has been a highlight of season one. Did you and Casey J Adler have chemistry from the get go?
Yes, I would say we did. He is a terrific actor that I feel very comfortable with. I always love it when he is in an episode because I feel like he and I connect well and are able to really deliver a good scene. On top of that… he’s a super nice guy!

Do you get along with the other girls who play your fellow ballerinas?
All of my co-stars are great people, we are like family… really. There have been many occasions that we get together off set and go shopping, to the movies, take class or just hang out. We are all pretty good friends and are supportive of each other.

Do you have a favorite episode so far?
Wow that’s a hard question, there are two episodes that I really loved. The second episode “For Fanny” was a favorite of mine because I really loved the dance in that one and felt very emotionally connected to it. The other one I loved was the tenth episode, “A Nutcracker in Paradise.” It was so fun to shoot and it had that great macing scene which will probably always be one of my favorites!

If you could have the characters dance any ballet in the world, which would it be?
My personal favorite ballet is Swan Lake but I don’t know if I would want the characters to do that one, it’s pretty classical for TV. I guess I would pick a contemporary piece of choreography, something like Twyla Tharp or Alonzo King LINES would do. I think the audience would really like that and I know I would love a chance to perform a contemporary ballet en pointe!

Are you a So You Think You Can Dance fan? Their finalists keep popping up on Bunheads.
Of course I am! All of those dancers are so talented, I respect and admire their strength and versatility. I even had a friend on season eight that I danced with in my early years of training. It was fun to watch her progress and success on the show, it made me feel proud!

Is there anything you’d like to add?
I just want to say thanks to all of the fans of Bunheads for loving and supporting the show, to ASP for believing in me and giving me my first big break, and to ABC Family for allowing us to tell the Bunheads story! Bunhead kisses to everyone!