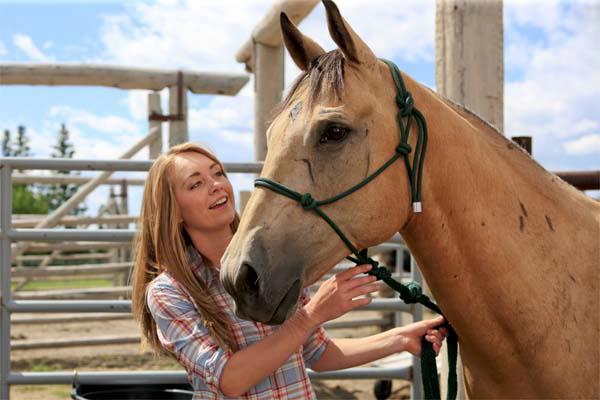 Heartland is a family show. I remember hearing the CBC advertise their Sunday evening lineup back in the fall; they called Sunday night “family night”. And Heartland is a part of that.

The series is constantly expressing and reinforcing traditional, Canadian family values. As a prime example, almost every episode the family sits down at a large table together to eat a home-cooked meal. There are no televisions on during dinnertime; they only focus on each other. Family members usually discuss their problems or challenges they’re facing; this gives them a chance to seek help and advice from each other as a family unit, instead of individually. “We’re in this together” could be one of Heartland’s mottos. Family members on Heartland ultimately view their roles in relation to each other, as a collective unit, rather than constantly thinking of themselves as individuals. Eating at the dinner table symbolizes this mentality.

However, this narrow label of being a family show limits the series from expressing really controversial topics, and constrains their ability to challenge social conventions. Sometimes horses get stolen, people get in accidents, and houses even burn down, but the drama never seems to get too intense on Heartland (excluding the very first episode when Lou and Amy’s mother was tragically killed in a car accident, of course). This lack of variety, and lack of controversy makes the show feel less realistic and more idealistic —more like the family most of us would dream of having.

For a television series not known for its controversy, things have been heating up on  Heartland lately as Ty is framed for killing a horse under his care, and his whole career is threatened. These days, people are wielding guns (not the hunting kind) on Heartland. This sharp deviation from its family-focused content is risky on their part. Which leaves me thinking that they’re going to lose fans because of this. I believe that wielding a weapon on a CBC family prime time show will concern some mothers and fathers, but will it actually prevent them from letting their young children from watching the show? It’s hard to say.

I wonder if this season of darker episodes could tarnish Heartland’s reputation as a family-friendly series or if, on the other hand, it could attract more viewers. This move could very well be a deliberate strategic attempt to draw in a whole new set of viewers—a new demographic made up of more than just parents and their children.