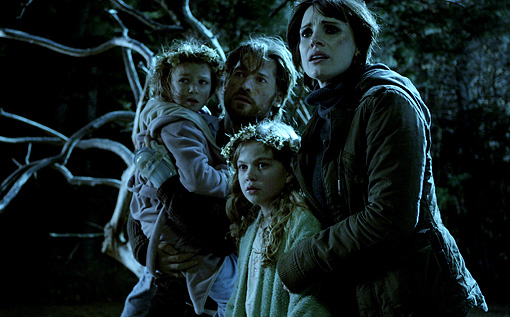 Lame Title Aside, Mama Is Not All That Bad

Based off of a 2008 Spanish short (titled ‘Mama’ of course), Mama, directed by Andres Muschietti, tells the tale of two mentally damaged girls that were found mysteriously in the woods being taken in by a new family, yet the two girls are not the only beings that were brought into the home as a haunted, troubled figure known as ‘Mama’ lurks.

The Spanish short is pretty awesome. It is well done, quite unique, and certainly worthy of three minutes of your time. Then along came fan favourite Guillermo del Toro and Mama is now a full length ( 100 minute run time) film. It’s always interesting and exciting when you hear that something is going to be based off of another thing. Especially a short film, seeing how they can make 3 minutes into 100 minutes is always going to spark intrigue (and pessimism). If there’s a will, there’s a way.

I am always excited and filled with tingles of glee and wonder whenever I see del Toro’s name attached to anything. So when I first saw the trailer for Mama, I really was not all that impressed, until, however, I saw ‘Guillermo del Toro Presents…’, then I felt a sudden desire and yearning to see this flick and let me just say that despite my doubts, knowing, and reminding myself that this was just going to be another Hollywood horror filler, I enjoyed it.

What really gets on my nerves are people who go into a movie without proper pre-conceptions. Going into Mama, you have to understand that your hopes cannot be too high and that this may not be amazing or ground breaking. But, if you go into it open to cheap scares and with low expectations, you will always be pleasantly surprised by the simple and subtle things that it has to offer. That is not just with Mama, but simply a rule of thumb for any genre-based film. The little things in Mama are fun and do offer some chills and scares, but don’t expect anything too big simply based on some names in the trailers and opening credits.

Mama is a great little horror production. The tone and setting are well kept and focused. Very eerie and frightening, the tone and mood are not only complimented by the set, but also the music does an effective job of guiding scenes. Suspense in this film is great and the pop-up horrors are always a treat and quite scary. Everything about Mama just works and is well put together. The cast did a really fine job, Chastain, Charpentier, and Nelisse all put on very entertaining performances. The character development is straight forward and fits in nicely with the script and all that takes place within the film. The pacing is a little slow in the middle, but there are always thrills to be had.

Mama ends on a very ‘off’ note. I say ‘off’ because that is just how it felt. It is somewhat unsatisfying and just a little disappointing, but it’s always a little difficult to end horror films in a proper and satisfying manner, especially supernatural horror it seems (for reasons unknown). Despite the ending sequence(s), Mama is just a plain, stupid, enjoyable, cliché horror romp that if you are in the mood for, you may take a liking to.

Also, little girls in horror films are and always will be scary.