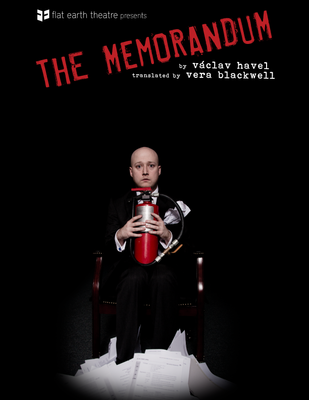 The Memorandum by Vaclav Havel

Being no stranger to Flat Earth productions, I was ecstatic to kick off my new year with one of theirs.  Never much being one for Absurdist theater, nor having a particularly deeps knowledge of Czech playwrights, I went in to The Memorandum completely blind, and suffice to say I was blown away by what I saw.

Richly presented with fantastic visual and audio design, Flat Earth’s production was, simply put, fantastic.  The set was designed wonderfully, making excellent use of space to present a multi-room office, complete with all of the accoutrements that went along with that.  Plenty of bonus gags existed for the particularly observant audience member (I particularly enjoyed the multiple clocks lining an office wall purposefully displaying different times for different parts of the building).  The choice of music and sound was irreproachable, as the sounds of churning gears, scratching pencils, and clicking typewriters accompanied each scene change in a way that was not only eerie, but perfectly reinforced the sense of time and place.

Delivered with outstanding timing and pleasure, the play itself was a wonderful romp through the bureaucratic nightmare that Havel created.  I found the antics of Mr. Pillar (Chris Anton) particularly enjoyable, whose physicality was among the very best on the stage and always had me chuckling, if not laughing outright.  Mr. Ballas (Chris Chiampa) struck an interesting balance throughout the play, alternating between entertainingly sweet and imposing as his plans unfolded.  Chiampa, of whom I was already a fan after his amazing performance in The Pillowman, was fantastic in both voice and presence when it came to commanding a room, and did it like no other actor in the production.

The dry wit and humanist optimism of Joseph Gross (Jim Remmes) was wonderfully played throughout the show, though perhaps fell slightly flat toward the end.  Such minor concerns notwithstanding, Remmes performed his role in a wonderful way, and perfectly complimented the machinations of Chiampa’s Ballas and Anton’s Pillar.  The airheaded Hana (Marty Seeger Mason) added a spectacular break in tense moments with her impeccable comedic timing.  Contrasting Hana’s somewhat simple world was the idealistic, though beleaguered, Maria (Dori Levit) who played very well in her scenes with Remmes, even though they were the more serious scenes, and not as prone to comedy.

All told, The Memorandum was fantastic, a wonderful addition to an already very high opinion that I have of Flat Earth.  If this is any indication, I certainly expect even more amazing work from them in the future, and I look forward to seeing it.  If you have any chance of seeing The Memorandum, jump on it, but you should hurry.  They sold out their opening weekend, and I certainly believe it will happen again.

More information about Flat Earth, and specifically The Memorandum can be found at  http://flatearththeatre.com/.