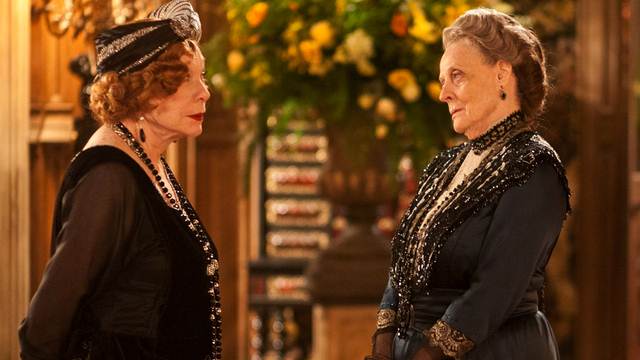 Downton and the Roaring 20s

Change is knocking on Downton’s door, and not a moment too soon. Downton Abbey starts its Season 3 by mixing things up, and so far, it seems to be for the best.

At the center of Downton Abbey is the relationship between Mary and Matthew. It’s been a will they, won’t they, yes they will, but oh wait- kind of a relationship. Season 3 made the bold decision to start off with their wedding. (Side note- Mary’s wedding ensemble was absolutely beautiful). When Matthew proposed last year, I assumed Season 3 would end with the wedding and we’d get a season of engagement drama. I’m glad to be proven wrong. There is still plenty of conflict between Matthew and Mary, and I’m glad the show isn’t going to let them turn into a boring, happily married couple as shows sometimes do. I’m sure they will get their happy moments, but married couples fight, and have problems so kudos to the show for acknowledging this.

It’s great that Matthew and Mary tied the knot, but Branson and Sybil are always going to be my favorite married couple. I’m glad they came back to Downton for Mary’s wedding. Branson’s awkwardness in his new role as Lady Sybil’s husband captures the theme of change very nicely. The house is divided on their stance of the chauffeur-turned-member of the Crawley family. As an American, I take class mobility for granted. But in the UK, apparently it’s a lot stricter. So it’s really interesting to see this subject from a British point of view, in a time when it was even less common than today. Plus the fact that Branson is still an Irish radical at heart and isn’t going to mold quietly into the upper class is really entertaining to watch.

Edith, the last Crawley sister is also getting a good storyline this season, so it would seem. Poor Edith. As a fellow middle child, it pains me how often Edith is pushed to the side. Edith has set her sights on marrying Anthony Strallan. Strallan happens to be one of the most awkward human beings on the planet, much older than Edith, and her family does not approve of the match. But Edith is bold when Strallan hesitates, and fights against her family’s interference. Good for her. Both her sisters are happily settled, and it’s about time Edith had some luck in the romance department.

While the family upstairs is making peace and trying to get settled, war is brewing downstairs. Thomas and O’Brien, who in the past were often co-conspirators, are now at odds. O’Brien managed to get her nephew, Alfred a job as a footman. She wants Thomas to help Alfred become a valet. But Thomas hates helping people, and has worked too long and hard to get where he is, to help Alfred gain overnight success. We see some petty fighting between the two, but this is far from over. O’Brien and Thomas know each other better than anyone, so it won’t be long before this gets ugly.

There are a few characters I could stand to see less of. The first one is Bates. I tried to like him, but kept getting annoyed with, then worse- bored with- him.  Last season he was sent to jail. Unfortunately, this season, he still has a big role. His wife, Anna is trying to free him (let’s be real- we all know she’s going to find a way to get him out). There’s some subplot about a shady cell mate and a prison guard….I honestly have zero investment in this storyline.  Every time we left Downton to go to prison, I internally groaned. The show has such a large ensemble cast, I think it’s a shame we’re spending so much time on Bates.

Another character that I have little to no investment in is Ethel. I don’t know anyone that actually likes her character. I thought we got rid of her last season, but alas, no. At least with Bates, I understand why he’s still part of the show. He was always intended to be one of the central characters. He’s married to Anna, and old friends with Robert, so within the world of the show, it makes sense. But Ethel? She doesn’t really have any ties to Downton. And yet they keep inventing plots for her to come back.

There’s no need. There’s plenty of drama to go around. The most important stems from Robert mismanaging the family fortune. Downton is in serious trouble. I’m not that concerned- how do you have Downton Abbey without Downton Abbey? The setting is just as much a character as any of the actors.  But still, it’s causing plenty of conflict. Mary almost called off her wedding to Matthew when he wouldn’t help save Downton with an inheritance from his ex-fiancé’s father. And while these problems will be solved soon enough, the threat of losing Downton is a good reflection of the times the characters are facing.

Finally, since it can’t be a discussion about Downton Abbey without talking about Maggie Smith, let’s talk about Maggie Smith. Her Dowager Countess was spot on as always. I can never pick a favorite line of hers, and tonight’s episodes were no exception. I was slightly disappointed in Shirley MacLaine’s Martha Levinson, Cora’s mother, and (God forbid) an American. Most of what Martha said was, ‘Times are changing, you better adapt.’ That’s all obvious from what we’re seeing. But since Martha’s character meant some glorious Smith vs MacLaine action, I won’t complain too much.

Despite a few hiccups, Season 3 is off to a strong start. After an uneven second season, I hope Downton Abbey keeps it up, and we see more change as we travel further into the 1920’s.