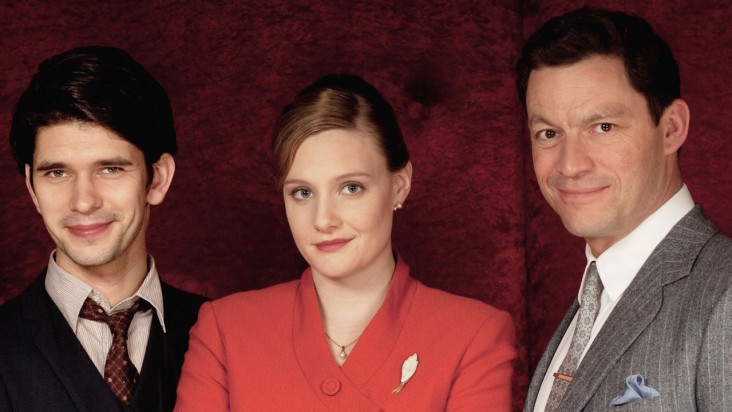 If you’re not watching the BBC’s The Hour, you’re missing an exquisite drama featuring a very talented, very British cast.

Romola Garai and Ben Whishaw star as best friends and should be lovers Bel Rowley and Freddie Lyon. (Full disclosure: Garai and Whishaw are two of my favorite young actors, so I was predisposed to love this show before I ever watched it.) Bel is the indomitable producer of the BBC newshow The Hour. Freddie is a passionate reporter. Rounding out the leading trio is Hector Madden (Dominic West), the show’s ambitious anchor.

While I adored Season One, I am extremely excited for Season Two. The big theme so far this season seems to be violence on the streets. This will mean being more personal to everyone on The Hour team, and hopefully this means more time examining and developing the relationships between the characters. Season 1 was filled with good old fashioned Cold War espionage as Freddie investigated the death of an old friend. It worked. It created a cohesive storyline. My one issue was it isolated Freddie from the rest of the team. It was only in later episodes that he started to ask for their help, and they started to believe his conspiracy theories. While Ben Whishaw is always compelling on his own, I like the show best when the characters interact with each other. He and Garai’s relationship is the most interesting on the show.

Freddie spent the first season being in love with Bel. But despite this unrequited love, he and Bel were still best friends. They drove each other crazy, but in the end always had each other’s backs. Now in the most recent episode, Freddie has been gone for several months. He returns, unannounced, suddenly well-traveled and all grown up. After spending season one almost having to mother Freddie at times, Bel realizes perhaps she has feelings for him. It just took him being a little more mature for her to see it. As she is about to take a chance with him, he shows her something he brought back from France: a wife. What? Freddie, I know your dad died, and you were sad, but what? You’re still clearly in love with Bel! It’s going to be interesting to see how this plays out- Bel is clearly hurt Freddie didn’t tell her he’s been married for two months, and Freddie is…well….married.

Bel and Freddie aren’t the only ones whose relationship is changing. In last season’s finale, Hector chose his ambition over his journalistic integrity. This season, he has let his celebrity go to his head, and spends his nights boozing. He is constantly late for work, and a regular feature in the gossip columns. Now, the BBC’s new head of news, Randall Brown is fed up, and has made Freddie Hector’s co-presenter. Freddie is pleased. Hector- less so. In fact, Hector’s considering offers from rival news shows, even while nursing a growing alcohol problem. His wife, so patient in Season One has had about enough.

I need to stop and say how great Oona Chaplin (Charlie’s granddaughter) is as Marnie, Hector’s wife.  Actually, let me just say how fantastic the women are on this show. Bel and Lix make up my second favorite friendship on the show. They never disappoint when they share the screen. Lix acts like a mentor, cool big sister, and friend all rolled into one. In a male-dominated world, these two intelligent women stick together and more importantly, trust each other, and it’s refreshing.

The show is also brilliant at defining the secondary characters.  Marnie, the long-suffering housewife, or Sissy, the enthusiastic secretary, in the hands of less caring writers could be two-dimensional; here there is the promise that there are more layers to be explored.

Last season, there were hints that there was more to Marnie than her sunny, shallow exterior.  She knew about Hector’s multiple infidelities, but still wanted him back. One of my favorite scenes in the season premiere tonight was when she coldly greeted Hector at a restaurant. After nights of neglecting her to go out and party, he was late to lunch and started a self-involved rant. When she responded disinterestedly, he asked if he was boring him, and Marnie loudly said. “Yes, you are. You are boring me.”  After watching a season of Marnie being miserable and neglected, it was so satisfying to see her stand up for herself.

And I have a feeling Sissy will get a storyline of her own this season. Last season, she was mostly seen through Isaac Wengrow’s eyes as he pined after her. She started a relationship with another man- a black man. In the premiere, there were hints of tension from the world outside the studio at this interracial relationship. I feel with the direction this show is going this season- focusing on the domestic front- Sissy will have a larger role to play.

Not only are the women fabulous, but their costumes are gorgeous. Bel, the savvy career woman, determined to retain her individuality in a man’s world wears boldly colored, sexy, yet classy outfits. Lix, the experienced journalist wears sleek, professional clothes. Marie dresses in feminine pastel dresses- think classic Aubrey Hepburn. I admit that often times I get involved with plot when watching TV, and sometimes don’t appreciate the technical aspects, but these costumes are just too beautiful to be overlooked.

I spent a long time discussing the ladies of this show, that I feel it only fair to say the gentlemen are also fascinating in their own right. The world needs more journalists like Freddie- good men who are determined to find the truth. I could go on all day about basically every character, but I won’t. Suffice it to say, there isn’t a character on the show that I don’t find interesting in one way or another.

There’s so much to look forward to this season. Sissy and Marnie hopefully getting more screen time. Bel’s flirtation with a rival producer. Freddie’s marriage. Lix and Randall’s mysterious shared past. Hector’s downward spiral. And it’s all taking place in what looks like will be a darker, more gritty London than we’re used to seeing.

You can watch The Hour Wednesdays at 9 on BBCAmerica.