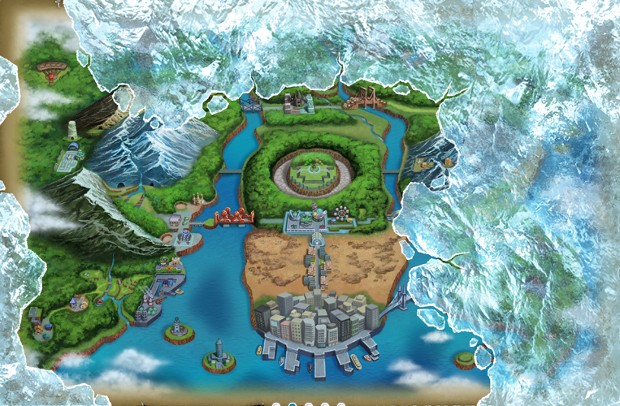 Life After the Elite Four

Congratulations – you’ve done it. When your journey began, you were a novice trainer with only a single Pokemon to your name and a few thousand P in your pocket. Together, you and your Pokemon made new friends; took down eight gym leaders; traversed caves, deserts and oceans; you even brought down a criminal enterprise along the way. Now, you and your team have defeated the Elite Four – the most powerful trainers in the land – and you have become a Pokemon Master.

So, what are you going to do next?

Well, you could just lounge atop your gilded throne, eating bonbons and watching matches between Metapod and Magikarp on your big screen TV. Unfortunately, that wouldn’t make for much of a gaming experience, so there’s no option to do that in Nintendo’s most recently released iterations of the Pokemon franchise, Black 2 and White 2 (available now for the Nintendo DS). But what kind of Pokemon Master quits after becoming the best in the world?

It might not be obvious at first, but Pokemon Black 2 and White 2 offer an extensive and engaging postgame that will keep you playing for hundreds of hours after the credits first roll. Here’s a quick run-down of what’s in store for you on the rest of your Pokemon journey.

The story of B2W2 doesn’t end with your entry into the Hall of Fame. From the moment you wake up in your room, your friends and family are already shooing you off to new places. B2W2’s postgame story will take you all over Unova, including to parts of the map you haven’t visited yet, back through Victory Road and to the Elite Four once again. You’ll be able to battle trainers with Pokemon leveled in the 60s-80s, team up with old friends, and challenge old enemies. If you’ve activated the Memory Link feature, which joins your Pokemon Black or White data to your new B2W2 save file, you’ll learn more about the two years that have passed since Black and White. Overall, the B2W2 postgame story does what it’s supposed to do, anchoring you in the world without providing a concrete “ending” to an infinitely playable game.

Even if you aren’t a Pokemon veteran, you’re probably familiar with the popular catch phrase “Gotta Catch ‘Em All.” B2W2 delivers the most comprehensive Pokedex-building experience of any individual Pokemon title, granting in-game capture access to a whopping 483 different species of Pokemon (453 in Black 2, 450 in White 2). In order to fill up your Pokedex, you’ll need to trade both between versions and back from previous versions, follow hints about rare Pokemon swarms, and follow sidequests to hunt down legendaries. B2W2’s legendary offerings are in themselves legendary, with a total of 17 different legendary monsters obtainable in-game.

B2W2 also offers the most tantalizing dex completion rewards we’ve seen in a Pokemon game thus far. Upon seeing one of each species of Pokemon native to the Unova region (that’s 297), Professor Juniper will give you a pass that allows you to enter the Nature Preserve, a secret area full of rare Pokemon (including a shiny version of Haxorus). If you manage to catch all of those 297, you’ll receive an oval charm, which speeds up the pace of Pokemon breeding. Finally, if you complete your entire Pokedex – excluding the event-only legendaries, like Mew and Shaymin – you’ll receive a shiny charm, giving you a marginally higher chance of encountering ultra-rare shiny Pokemon in the wild.

With plenty of trainers leveled in the 60s-80s, you’ll have no shortage of opportunities to battle in the B2W2 postgame. You can continue to gain experience for your old team (or build an entirely new one!) with high-level challengers in such locations as Nimbasa City’s Big Stadium and Small Court and Castelia City’s cruise liner and Game Freak headquarters. You can even challenge the Elite Four as many times as you like, with some collectible medals requiring you to beat them in different scenarios (e.g., with a single Pokemon, with a single type, etc.).

The Battle Subway and Pokemon World Tournament provide unique challenges, allowing skilled trainers to win battle points (instead of experience points) that can be traded in for some of the most powerful items in the game. The Pokemon World Tour (PWT) is a new and exciting feature in B2W2. There, you’ll be able to participate in any kind of battle – single, double, triple or rotation – opposite every gym leader and champion from every previous Pokemon game. Even Red, the protagonist of the original Red, Blue and Yellow versions, is available to challenge.

All of these extra features are augmented by the difficulty settings that unlock once you’ve defeated the Elite Four for the first time. In White 2, you’ll receive easy mode, which will either have you steamrolling your helpless opponents as you cackle manically, or allow younger players an easier gaming experience. Black 2 grants you the challenge mode, which will ramp up both the AI and your opponent’s rosters to provide a more serious challenge for strategy junkies. The best part of these difficulty settings is that you can obtain the one you’re missing simply by trading the “keys” that unlock them between versions.

Black City and White Forest return in B2W2, but what was once a highly problematic area has been transformed into a Pokemon Master’s dream. In Black and White, these areas suffered from being population dependent upon both finishing the game quickly and having access to other players.

Now, all of that has been replaced by a 10-story dungeon full of trainers leveled from 40-80, and topped with a formidable boss. The challenge is intensified by an item lock that prevents you from healing, except through in-battle moves or one time per floor with a doctor or nurse (whom you must also defeat before being healed). As you clear levels, more shops will be unlocked in Black City or White Forest. These shops offer rare evolution items that will help you to power up your Pokemon and complete your Pokedex. Completion of either dungeon will net you the impressive reward of a shiny, level 1 dragon Pokemon (Gible for Black 2, Dratini for White 2).

Pokemon Black 2 and White 2 offer an expansive and exciting postgame that will allow any player to focus on whatever pleases him or her. Hardcore team building is much easier with the plethora of new trainers and the introduction of the oval stone. Collectors will find themselves swimming in Pokemon and medals to add to their roster. Meanwhile, players looking for a break can indulge in mini-games like Pokestar Studios and the Pokemon Musical. Veteran players can see their old favorite characters again in the Pokemon World Tournament, and newcomers can become immersed in the world of Pokemon through the extended storyline. B2W2 truly offers a rich, potentially indefinite gaming experience for players of all shapes and sizes.

So what are you waiting for? Your Pokemon journey has only just begun!