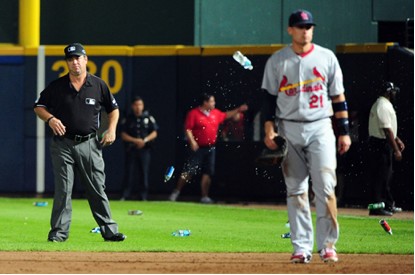 I am going to be perfectly honest with you: I had very serious doubts about the new wildcard playoff game when Selig announced the new format before the start of the 2012 season. After watching how things worked out to end the season, baseball’s new playoff system was just one blown call short of perfection. The new “one and you’re out” wildcard playoff game is the best thing Selig has done to the game since bringing in the first Wildcard in 1995.

The first and best thing the new wildcard did for baseball is bring value back to the division. Because of the new wildcard game, every game right until number 162 means something and if you don’t believe me… just ask the Texas Rangers. Your ticket to the divisional series is no longer a guaranteed unless you win your division. Winning a wildcard should never have been on equal ground as winning the division, so adding this new ‘win or you’re out’ wildcard game does just that. It gives every team a reason not to take their foot off the gas in September and win as many games as possible.

The second best part about it is the game itself. I spent the entire afternoon with my sons watching these intense games, which both had the ‘game seven’ atmosphere that we all love to see in pro-sports.  While I am sure going to the wildcard game adds more pressure to the teams that can’t reach their division title, it gives them more reason to try harder the next year or face the same “one and out” game next year. With the exception of one blown call made in the seventh inning of the Braves/Cardinals game, the Wildcard games added some great moments to what has been a fun season and I am now a believer and can’t wait to see these games next year.

The only thing I actually disagree with was giving the Wildcard team home field advantage in the first round of the playoffs. That doesn’t seem very fair to the team that won their division. They earned the right to play at home first, so that is something I hope is fixed next season. Besides that, I’m willing to admit that I was wrong; the added Wildcard was just the shot in the arm Baseball needed that made this season a lot more fun and memorable than it would have been without the extra wildcard playoff spot.

So I’m onboard with this new wildcard, but tell me what you think: was this new playoff spot a success or a failure in your books?