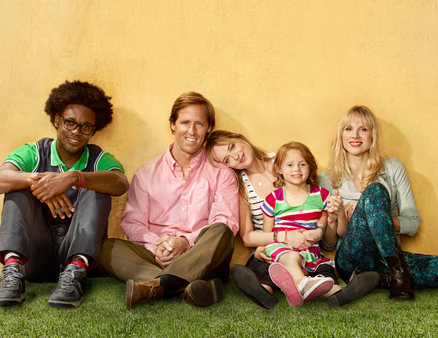 Fox’s extra Tuesday comedy is fine. It’s cute, it’s good for the occasional chuckle and sympathetic quirk. But that’s about it. The reason I call Ben & Kate Fox’s “extra” Tuesday comedy is that it’s programmed alongside New Girl, The Mindy Project and Raising Hope in what I think is the strongest comedy block on the schedule (NBC Thursdays will always hold a special place in my heart but they’re not what they once were, nor are CBS Mondays or ABC Wednesdays). Thrown in at 8:30, Ben & Kate so far stands out as the one show in that standout lineup that’s not yet as sharp or witty as the others.

Here’s the good news:
– Maggie Elizabeth Jones is super cute as Kate’s daughter
– I adore Lucy Punch and she’s already the highlight of the series as Kate’s coworker BJ
– Nat Faxon is an Oscar winner (for co-writing The Descendants with Dean Pelton and another guy). Does that mean he’s actually a funny enough actor to carry his own show? Maybe not (he’s a great bit player! but he might be annoying as a lead). But it means they can advertise that the show features “Oscar Winner Nat Faxon”, so that’s good I guess.

Here’s the bad news:
Who Cares? A lot of the premise balances on our feeling sorry for poor Kate who had to grow up too fast. The show kicks off with a voiceover that tells us that Ben and Kate “basically had to raise themselves” and “Ben never grew up” so you’re supposed to get the impression that Kate had to take over the household and run it at great personal sacrifice (including being catapulted from the age of 15 to 45) a la Fiona Gallagher. But that’s not the story of Kate growing up too fast. In fact, I think by “had to raise themselves” the show just means that Ben and Kate had to comfort each other more than average. Her story is about having a kid too young. My problem with the entire premise is therefore 3-fold: 1) that is a problem that is oh-so avoidable by just, you know, paying attention in health class. 2) Her expedited ageing is not causal with Ben’s immaturity and it’s a hundred times more interesting if he used her as an excuse to not grow up and she felt she had to because he wouldn’t. Alas, nope. 3) We’ve seen Kate’s story before, told more interestingly. The single teenage parent story is almost a trope at this point and I think TV audiences are so used to it that we’re past handing out sympathy on that front. Kate has a nice house and a steady (if not ideal) job and, yes she’s dating a cheating dud (Jon Foster- adorable! I wish he were a nicer character so we could keep him around), but she has good friends (even if she categorically takes them for granted) and a great daughter and her brother, though an inconvenient presence at times, loves her to pieces and only wants her to be happy.

Despite the pilot’s sentimentality, I still think Kate’s too impatient with Ben and I’m not sure I buy their relationship. Their relationship being the crux of the show, that’s really not  a good thing.

I don’t know if Ben is charming enough to make up for the fact that I really don’t care an ounce about Kate and her plight. Sitcoms need a problem to kick off a premise- an unexpected situation or a big character flaw. But characters worth watching take that premise and laugh at it instead of standing around whining that “Wah, I have an unexpected situation (from 6 years ago) and my brother has a big character flaw! WAH”, please. If you’re going to be annoying, you have to at least be unintentionally funny- nope.

Oh well, at least Tuesdays still have Jess, Mindy and the Chance family!