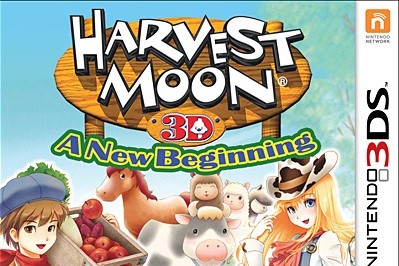 On October 19th, Natsume Inc. announced a soft release date for Harvest Moon: A New Beginning, the first 3DS title in the SNES-vintage series Harvest Moon. Although sales numbers are not yet available, A New Beginning (“ANB”) has received a hefty volume of pre-orders, unsurprising in light of Natsume’s adorable pre-order bonuses (a plush yak or foot-long plush cow). Of course, with a highly-anticipated game comes a high-strung fan base: and so our stage is set.

Natsume’s soft release announcement moved what was scheduled to be a November 6th release date up to October 23rd. Those who elected to preorder the game directly from the publisher received a pleasant surprise, with some preorders shipped as early as the day before the big announcement. Fans who ordered from third-party distributors, particularly GameStop, would have to wait for the games to arrive at the distributor’s corporate headquarters before being dispatched. As the days wore on, however, GameStop made no activity on the title.

Fans became impatient. Calls to GameStop locations gave little comfort, with uninformed retail associates reading the November 6th date back to better-versed customers. The week continued, and GameStop showed little signs of progress. Eventually, fans were charged for their preorders – a good sign, since GameStop only bills once a game has been processed for shipping. Yet even by Friday, October 26 – a full week after the soft release announcement and days after GameStop began charging customers – not a single copy had been shipped. Meanwhile, larger distributors Target and Wal-Mart had already begun to stock ANB on store shelves.

GameStop customers felt shut out. Despite the fact that some had ordered the game on the first day the preorders became available, there were fans out there playing the game who had not preordered at all. Some began to cancel their pre-orders with GameStop in favor of buying copies on Target shelves, or ordering a new pre-order from Natsume. Some fans, however, were locked into their GameStop preorder; once your order’s been processed, there’s no turning back.

These customers were doubly damned by GameStop’s retail end: the popular Harvest Moon forum “Ushi no Tane” is rife with stories of associates hanging up on them; laughing in their faces; even telling parents that their friends had “obviously obtained the game illegally.” This appalling treatment has driven customers even further away, frustrating and alienating those tied to their GameStop preorder by the billing mechanism.

So it was, that what Natsume had intended to be a nice surprise for fans became a week of stress. When asked about Natsume’s intent regarding the soft release, Graham Markay of Natsume told me, “The soft release date for [ANB] was a spur of the moment decision…not something we planned. Due to the quick production time by NCL and the fact that everything was available early, we wanted to do something for our dedicated Harvest Moon fans.  So we started shipping to retail and online customers early.  Obviously the advantage is to get the game in consumers’ hands early.” But for many consumers, that didn’t happen.

While fans rush from Target to Target, calling GameStop every step of the way for updates, the question on developers’ and distributors’ minds should be: How could this have been avoided?

The biggest issue in this entire scenario has been – and as of my writing this article (October 26), continues to be – GameStop’s utter failure of communication. At no point has GameStop’s corporate headquarters provided information for employees or for fans, despite repeated queries through social media as well as official channels. This resulted in a flurry of problems, any of which could have been avoided by a simple press release.

First, the rude and unprofessional treatment customers suffered at the hands of uninformed retail associates. Had GameStop employees been informed of the situation to begin with, a prepared statement could have been made available. Customers would not have been told that they were lying, or had obtained the game illegally; they would not have been laughed at or hung up on. While some customers have the guts and determination to report such conduct to headquarters, it is an unmistakable truth that most customers are not likely to take time out of their day to inform a company by whom they have already been insulted once.

Second, fans would not have begun canceling their pre-orders in the numbers that they did. If GameStop had simply released a statement that they were working on packing orders, or a release window, things would have been much calmer within the fan community. Many customers reported feeling that things would have been better if the release date had never changed at all – then, at least, they would know what day to expect their game.

Lastly, fans who did want to cancel their orders could have done so without being “held hostage” by GameStop’s billing system. By charging customers, then holding their packed orders until some undefined date, GameStop had essentially trapped many purchasers into an order they no longer want to complete while withholding the item paid for. The fact that GameStop has charged customers without giving any sort of estimate as to when shipping will occur is simply unacceptable.

Natsume’s decision to release early, while well-intentioned, could have been better executed. As a “spur of the moment” decision, it seems highly unlikely that GameStop was given enough time to adjust shipping schedules to accommodate the new date.

Of course, a soft date simply means that retailers will get their items by that date – it doesn’t mean they have to sell them by then. That said, if GameStop did not intend to change the release date, an official statement to that effect should have been issued and customers should have been given the opportunity to back out of their preorders.

Secondly, Natsume’s well-intentioned surprise ignored the financial reality of many customers. Because pre-orders are traditionally charged only at the time of processing, lower income gamers often budget for a game based on the time of release. Before the fiasco with GameStop, one of the major concerns among Harvest Moon fans was that they were being charged at a time when they did not have the money to cover the purchase. Of course, many fans are also minors, whose parents were surprised by a charge they did not expect. If soft releases occur in the future, Natsume could avoid this problem by allowing fans to opt out of early shipping if their funds are not available.

At the end of the day, fans are fans, and Natsume’s surprise was generally welcomed by the Harvest Moon community. While it remains to be seen when or how GameStop will eventually respond to customers, this entire ordeal has made one thing abundantly clear: in the day of the internet, communication is key.