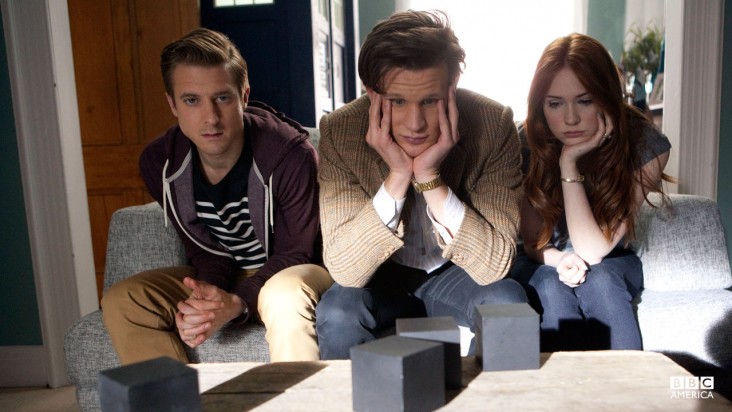 The Power of Three

Amy narrates how different Doctor life (aliens, explosions, running) is to normal life (what the rest of us deal with). Amy and Rory discuss choosing between the two, but worlds collide as a mysterious black appears in the Ponds’ bedroom as they sleep.

The little black boxes are actually all over the world. Brian (Rory’s dad) and the Doctor turn up at the Pond’s house and are soon joined by UNIT soldiers who burst in. Their leader, Kate Stewart, is in charge of UNIT’s scientific research. She admits they don’t know much about the cubes, despite extensive testing. Kate leaves, and the Doctor is left with Amy and Rory, observing the cubes. He is quickly bored, and departs. Amy and Rory go about their normal lives: Amy socializes with friends, Rory works at the hospital. They’re both glad ‘real life’ has started.

Real life might not be all that it seems: at the hospital, a creepy little girl holds one of the cubes and watches two of the hospital workers (with oddly shaped mouths) attack a patient.

Other than that, things are normal. Brian makes a video log recording the progress, or rather lack of progress of the cubes. The Doctor pops up nine months later for Amy and Rory’s anniversary. He takes them on a ‘short trip’, but naturally they get sidetracked. The Doctor manages brings them back before the party ends. (I was impressed that the TARDIS was able to be on time for once). The Doctor asks to stay with the Ponds for a while to keep an eye on the cubes. He admits he misses them.

The cubes suddenly show activity. They all do different things. Rory and Brian go to the hospital, where everyone is freaking out due to cube-related activity. Amy and the Doctor go to the UNIT base. Stewart tells him all the cubes are active. (My favorite cube is the one playing the Chicken Dance, for no apparent reason other than it can.) Just as suddenly as the cubes started, they stop.

The Doctor realizes the cubes were surveying the planet.  He says they only started their surveillance now because they were being patient; by waiting months, people got used to them, and started bringing them into their homes and work places. The cubes begin to countdown from 7.

Back at the hospital, Brian is kidnapped by the creepy hospital workers from earlier. Rory chases them as they wheel Brian into an elevator. The elevator’s back wall is actually a portal to a spaceship.

The cubes reach 0. People near the cubes collapse. They’ve all suffered heart failures. UNIT’s tech shows there are seven transmission stations the cubes are connected to- the closest one being Rory’s hospital. The Doctor too suffers heart failure, but luckily has two hearts. Still, he needs Amy to use a defibrillator when they reach the hospital. The Doctor and Amy find the spaceship portal. Amy and Rory take Brian to safety as an alien appears. He is a Shakri, which surprises the Doctor, since he thought the Shakri were a myth. The Sharki are ‘pest controllers’ of the universe and want to eliminate the human race before they spread and colonize.

The Doctor argues with the Shakri, who vanishes. The Shakri was just an interface, and wasn’t actually there. With the Shakri gone, the Doctor commandeers the computer, and uses the cubes to reverse the heart failures. The Doctor tells Amy and Rory he understands they can’t give up their normal life. Brian says it’s the Doctor they can’t give up, and they shouldn’t. He tells Amy and Rory to go travel with the Doctor. The Doctor invites Brian, but Brian says someone has to look after the plants. He tells the Doctor to keep Amy and Rory safe. Judging by the promos for next week, that’s not going to happen, but it’s nice to hope.

This episode was a mixed bag. One of the things I really disliked about this episode (and I’m probably in the minority) was when Amy asked why the Doctor kept coming back for her. He replied because her face is the first one his current face saw, and she is seared into his hearts. First, I’d like to clarify that I’m not questioning Amy’s importance. But the implication that the Doctor imprints on the first person he sees after his regeneration like a baby duck, and that person is the most important person of that incarnation…no. Just…no.

This is what happened with 10 and Rose. She was the first person he saw, and the love of the 10th Doctor’s life. Yes, Rose was an amazing character. But when Martha became the companion, the Doctor (and to some extent, the audience) spent Martha’s entire season mourning Rose’s departure. The Doctor didn’t truly value Martha until she left. I’m seeing a similar build up in 11/Amy’s relationship. I don’t want another Rose/Martha situation again. Furthermore, I don’t think Amy’s special because she’s the first person 11 met. She’s loyal, feisty, curious, and brave. The show should celebrate these qualities, not suggest companions are important because of what order they met the Doctor. It’s a disservice to what Amy has accomplished, and a disservice to all the fabulous companions who were awesome in their own right, but weren’t first.

Another issue was I couldn’t see why the Ponds had to choose a life. Sure, the Doctor whisked them off for a seven-week adventure in the middle of their party. But he brought them back before their friends even realized they were gone. (Brian noticed, but he’s Rory’s dad, and them Williams boys are the only logical people on the show).

I would have liked to see conflict that was a direct result of travelling with the Doctor. Amy and Rory said they liked normal life- that’s not a conflict. That seems like they’re being picky about a pretty sweet deal. They get to interact with their family and friends and do normal human things, while having an occasional adventure traveling through time and space. I want that arrangement if they don’t. Convince me it’s harder than it seems.

Overall, the episode felt rushed. The cubes did a lot of sitting and doing nothing. Cool. It built tension. However, there isn’t a point to building all that tension if the episode is resolved so quickly and easily. They spent a year unable to find anything out about the cubes, but suddenly the Doctor can override the cubes’ directions and fix everything? (Side note- that means he brought all those people back to life after they had been dead for a while. That’s slightly problematic/not possible).

While I clearly had a lot of issues with this episode, I liked the concept of exploring Amy and Rory’s ‘normal life’. This episode reminded me a lot of season 3’s ‘Human Nature’ and ‘Family of Blood’ in which the Doctor became human. ‘Human Nature’ unfolded slowly so we had ample time to see the Doctor in his human life. There was suspense woven throughout, but it wasn’t until the end of that episode and in the majority of ‘Family of Blood’ that the action happened. I think ‘The Power of Three’ would have benefitted from a similar structure. It had a lot to accomplish in a short amount of time. If it was divided into two episodes, we could have more time to explore the Ponds’ normal life, how it clashes with their Doctor life, and also had more time to deal with the cubes.

This episode had a lot of really nice moments, but as a whole, I think it fell short of its potential.

I liked that UNIT was brought back in this episode. It’s been a part of the show for such a long time, reintroducing it for the first time in the Moffat-era added a nice sense of continuity. And making Kate Brigadier Lethbridge-Stewart (one of the more well-known companions of Classic Who)’s daughter was a small, but nice touch for long time fans of the show.

Brian Williams/Pond has only been in two episodes, but he is one of my favorite TV dads. He reminds me of Wilfred Mott (Donna’s grandfather from season 4). They should be best friends. And have a spin off. I would watch that.