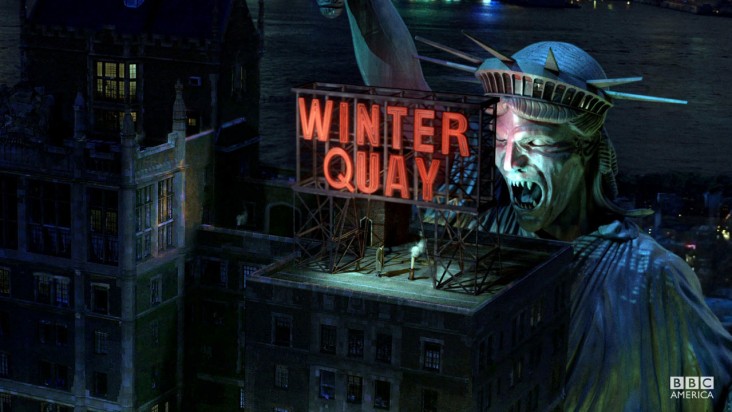 Doctor Who’s mid-season finale ‘The Angels Take Manhattan” is a physically challenging episode for the viewer. As with any episode featuring the Weeping Angels, your first instinct is to not blink. But by the end of the episode, it is very likely you’ll end up in tears; it’s very hard to decide what to do with your eyes.

Background: The Weeping Angels are aliens that look like stone statues. When they touch people, they send them back in time, and feed off of that person’s potential energy. As long as someone is looking at them, the Weeping Angels can’t move. But the second you turn away, or blink, they can move, and move fast.

We open in New York City in the 1930’s. A detective, Mr. Garner accepts a case from Mr. Grayle, a gangster who tells him about statues that can move when you’re not watching. A skeptical Garner goes to an apartment building. The doors open, and an elevator comes down to get him. Side note- Garner, if doors and elevators open by themselves, it’s never a good sign.

Garner enters an apartment. Inside, he finds an older version of himself. Old Garner warns his young counterpart that the Angels are coming for him. Young Garner runs, but is stalked by the Angels. He is chased up to the roof, where the Statue of Liberty is waiting for him.

Okay, pause. Really? Thank you, France for gifting America that statue. Were you trying to Trojan Horse us, or something? Because I’m pretty sure giant killer statue was on no one’s wish list.

We resume the episode in modern day Central Park with the Doctor and the Ponds. Rory leaves to get coffee. The Doctor reads aloud from a mystery book by Melody Malone. He rips out the last page of the book, so it won’t end. He hates endings.

Rory crosses the street and hears a creepy giggle, but doesn’t see anything. He continues walking.

The Doctor reads more from the book to Amy. In it, a woman follows a skinny man around. The Doctor and Amy freak out when the man in the story says, “I just went to get coffee for the Doctor and Amy”. They race to the TARDIS, realizing Rory is gone.

Rory in the meantime is in 1930’s NYC, with no idea how he got there. He encounters River Song. It turns out she’s the one who wrote the Melody Malone books. The father/daughter reunion is cut short as Rory and River are taken to see Grayle.

In the TARDIS, Amy checks the date in the book. April, 1938. The Doctor tries to get to that date, but there are too many time distortions for him to get there. He and Amy end up back in 2012, in a graveyard. Amy skims the book, and says at page 43, the Doctor will break something. The Doctor tells her she can’t read ahead; if she reads something in the book, it will have to happen in real life. As they get back in the TARDIS, we see Rory’s tombstone.

In 1938, Grayle tells his thugs to give Rory ‘to the babies’. Rory is thrown downstairs and given a box of matches. Meanwhile, Grayle interrogates River. He knows her as Melody Malone, a detective investigating Angels. He has an Angel in custody. River sends the Doctor a signal so he can navigate the TARDIS to her. Grayle allows the Angel to grab River’s wrist in order to force her to answer his questions. She asks Grayle what he wants with the angels; he’s a collector.

Rory is surrounded by baby statues. In the dark, he can hear is them giggling and running around him. He lights a match and sees one of the statues right behind him. It blows out the light.

The Doctor lands the TARDIS in Grayle’s house. Grayle passes out from shock. The Doctor says he has to break River’s wrist to free her. It’s the only way, since Amy read it earlier. Amy thinks that if River wrote the book, they should be allowed to use it to help them. Since actually reading the book is too risky, she reads the chapter titles, and discovers Rory is in the cellar.

The Doctor reads the book and sees that the last chapter is named ‘Amelia’s Last Farewell’. He freaks out and runs after Amy, leaving River to free herself. By the time the Doctor and Amy get to the cellar, Rory is already gone.

River freed herself, but had to break her wrist to do so. The Doctor heals it, and they go after Rory. River says the Angels transferred Rory in space, but not in time. In fact, Rory was sent right to the creepy apartment building from the beginning of the episode. The Doctor, River and Amy steal a car, and leave Grayle to the Angels.

When they him, Rory is in an apartment labeled with his name. The Doctor tells everyone to get out before they see anything. It’s too late; in one of the rooms is a much older version of Rory. Amy rushes to his side, and Old Rory dies. Young Rory wants to run. The Doctor says the building is a farm for the angels. If you try to escape, they’ll just zap you back in time again, and keep feeding off the potential energy.

Rory says if he escapes, it would create a paradox. River points out the paradox could kill all the Angels. The Doctor agrees it might work.  Rory and Amy run upstairs, but the Statue of Liberty is waiting for them.

Rory climbs the ledge, ready to jump. If he dies, he will have died twice in the same building on the same night, which would create its own paradox, and destroy the angels. Amy begs him to come down, but Rory says if he creates the paradox and kills the angels, the space he jumped from wouldn’t have existed, and he won’t be dead. Amy says they’re going to jump together, or not at all. The Doctor and River come to the roof just as Amy and Rory fall. The Statue of Liberty disappears.

We’re back in the graveyard. Amy and Rory wake up. The Doctor hugs them, and says he was afraid he had lost them both. Everyone heads back to the TARDIS for a nice family outing. Well, thank goodne– wait. There’s still more than 5 minutes left.

Something catches Rory’s eye. His tombstone. An Angel appears behind him. Rory calls Amy over to look at tombstone, and is taken by the Angel.

Amy demands to use the TARDIS to go back and get Rory, but the Doctor says that would rip New York City apart. Amy decides to let the Angel touch her; it would send her to wherever it sent Rory. The Doctor tells her if she does that, she would create a fixed point in time, and the Doctor would never be able to see her again. He begs her to come back to the TARDIS so they can think of another way. Amy say goodbye to the Doctor, and is taken. Her name appears on the gravestone with Rory’s. Rory was 82 when he died. Amy was 87.

Back in the TARDIS, River tells the Doctor he shouldn’t travel alone. He asks her to come with him. She agrees, but not all the time. The Doctor figures that River will give Amy the manuscript to the book so Amy can publish it. River confirms this. The Doctor remembers that he tore out the last page of the book. He races back to Central Park, and finds it.

As much as I love the Weeping Angels, I hope this is their last episode, for a while at least. The Weeping Angels’ debut, ‘Blink’ was a nearly perfect episode. Although the Angels are still scary, with each new episode they’re featured in, their mythology becomes more puzzling. In this episode for example, the Doctor said that the Angels took over all the statues in the city. Does that mean they’re controlling the statues, or they turned the statues into actual Angels? ‘Blink’ implied any statue could be an Angel, but it was never clear. It would explain the Statue of Liberty being an Angel, but it’s still ambiguous. The more the Angels are featured, the more questions it raises, and the more holes it pokes in their lore.

There were also some things about the show’s mythology in general that were confusing. The Doctor used regeneration energy to heal River’s wrist. I thought he could only use that energy when he was dying/regenerating. I didn’t realize it was something he could access whenever. It seems inconsistent with what we’ve seen before. Also, how do you make a fixed point? The show has never been clear about how to make a fixed point, which is why I don’t understand why Amy going back in time created one.

Then again, Doctor Who is a show that you need to watch with some belief suspended. So putting aside technical nitpicking: wow. ‘The Angels Take Manhattan’ was a beautiful farewell to the Ponds.

I’m glad River was back for her parent’s last episode. It was heartbreaking when she encouraged Amy to leave. She knew she would never see her mom again, but she wanted her parents to be together. That being said, is River’s end coming? She told the Doctor she’s a professor now. Which means the Library is probably in her near future. And those of you that have seen Season 4’s ‘Forest of the Dead’ know what happened there.

This episode really brought out the best of Amy and Rory. When Rory was ready to jump from the building, it was such a Rory moment. He was a normal guy who rose to the occasion and put others before him, even, and especially when he was scared himself. And it was true to Amy’s character when she chose her husband over the Doctor. She often seemed caught between the two (especially in her earlier episodes), but in the end, she always risked everything for the man she loved. The Ponds’ ending was bittersweet. It’s sad they had to be separated from their best friend and their daughter, but it’s also comforting to know that they grew old together.

Goodbye, Amy and Rory. You will be missed.

PS. If you’re going to take away two companions, when you show us a promo for the Christmas special, it should consist of more than three shots.

Now if anyone needs me, I’ll be rewatching all of the Pond episodes while devouring a pint of Ben and Jerry’s and sobbing. See you for the Christmas special.