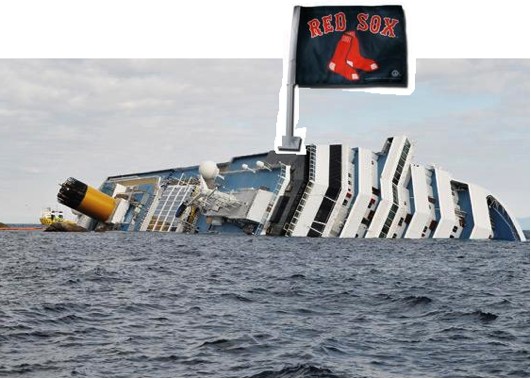 The picture says it all; the Red Sox are sinking ship. The team that finally broke the curse of the bambino has been tanking for quite a while. Ever since last season’s horrific September collapse, the Sox have been going down and have not been able to turn things around. As a result, they could very well finish dead last in the AL East this season, the way they’re playing.

And after a mini-revolt to management and owner, the Red Sox have jettisoned three of their biggest contracts off the books in a massive deal with the Dodgers. Troublemakers Josh Beckett and Adrian Gonzales are now in LA while Crawford will join them next season after he recovers from his current injury (in what has been many trips to the DL since he signed with the Sox).

The Sox have made a lot of dreadful mistakes that lead to the complete collapse of a franchise that was at the top of its game only a few years ago. Here are just a few things that led to the sinking of this ship known as Red Sox Nation:

This signing might go down as the absolute worst ever in Red Sox history, and possibly in all of baseball. It’s right up there with Carl Pavano’s contract with the Yankees. While this contract looked good on paper, it was anything but on the field. Crawford spent at least seventy percent of his first two years on the DL. Blue Jay fans hated the contract their team signed with Vernon Wells, but at least Vernon bothered to show up and play. The only way this contract could be any worse is if Crawford comes back next year and returns to his Tampa form for the Dodgers. That would be a real kick to the jewels for Red Sox Nation.

Don’t get me wrong, Adrian Gonzales is a great player, but for the Red Sox at the time they got him, this was not their best play. This trade and signing was made in haste and with an impatient fanbase expecting something to be done quickly to turn things around. If the fans had been more patient, not only could they have signed a bigger and possibly better free agent for first base in the form of Albert Pujols or Prince Fielder, by getting that big power bat by signing a free agent the Sox wouldn’t have had to trade away any high value prospects to get their man like they did for Gonzales. After the big trade with the Dodgers the Red Sox have nothing to show for trading those prospects away. While he was good for the Sox during his time here, Gonzales was not the right way to go at that particular time.

Last season, after the team imploded and failed to make the playoffs- being eliminated the very last day of the season-many people in Red Sox Nation wanted someone to blame. Unfortunately that blame fell on Manager Terry Francona, the same man who led the Sox to two World Series Championships only a short time ago. At this point in time, while Francona was technically in charge, the inmates were running the asylum. The players were out of control, and there wasn’t anything the manager could do about it. Players were drinking beer and eating chicken during games; this was MLB gone wild. Rather than take it out on the players who were not acting like the professionals they were being paid to be, the Sox fired their manager and pretended that nothing else was going on. With the players still doing whatever they wanted, no replacement was ever going to be able to turn this team around … no one. And while things couldn’t get better with a new manager, there was always a chance they could get worse.

Now I’m not going to bash Bobby Valentine, I happen to think he’s a good manager. He’s found success wherever he’s managed, whether it be turning the Mets around in 2000, or even in Japan where his team won a few championships. This is why the Sox were interested in him in the first place. Unlike many people out there, I don’t think the Sox are going to fire Valentine at the end of the season. He’s got a year left on his contract and I think the Sox are going to give him another chance with a new crew, and possibly some new additions in the form of offseason free agent acquisitions. If the Sox get off to a slow start next year, then I can see the hatchet coming down, but if management was going to fire Valentine, it would have been prior to the big trade with the Dodgers, not after it. The reason why the Sox are losing right now is because they gave away their best players for next to nothing, they had to expect some loses after that. The fact that Beckett, Crawford and Gonzales are all gone is a sign that management took Valentine’s side in this matter and are not letting him go. But then again, I could be wrong.

Then again, there is another reason why the Red Sox might be willing to give Valentine another chance in 2013. It might be because the manager they’ve wanted for a while also has one year left on his contract with the ball club he’s with right now. However, if the Red Sox really wanted this man so bad, perhaps they shouldn’t have let him go in the first place. John Farrell was the Red Sox pitching coach during both of those amazing World Series years-  is it a coincidence that the pitching staff happened to fall apart at the same time this man departed for a managerial position with the Blue Jays, a division rival no less? Last offseason, prior to Valentine’s signing, the Red Sox asked for permission to trade for Farrell, aware that they had made an enormous blunder by letting him go. The Blue Jays gave the Red Sox the answer that the Sox should have given them two years ago: bugger off. Word was the owner of the Red Sox didn’t want Farrell to leave, and the chaos afterwards might indicate he had an idea of what he was talking about. I doubt the Blue Jays had any idea this kind of chaos would follow if they hired Farrell as their manager, but they have to like the result of it. Do not be surprised if this situation leads to a future policy of coaches no longer allowed to move to division rivals, even for an elevated position.

At this point, the Red Sox have zero chance of making the playoffs… Elvis has a better chance of coming back. But the writing was on the wall the moment Gonzales and company went to the Dodgers, the Sox have already written off the 2012 season and are looking towards 2013 to comeback and get into the thick of things again.

The Sox still have a good chance to get back into the playoff picture next year, but a number of things have to happen in order for this to come to fruition. Now if this writer were in charge of the Red Sox, this is what I would do going into 2013:

As much as I like Bobby Valentine, both he and the entire coaching staff need to go. The Red Sox require a blank canvas in the coach department in order to move forward. That’s the only way management is ever going to regain control of that locker room.

Rather than keep pining over John Farrell and play into the Blue Jays hands, the Red Sox need to write off this mistake and move on with a new manager. Dave Martinez is the best managerial candidate out there that I think can do what is needed to turn things around. Right now Martinez is Tampa Bay’s bench boss (working under Joe Maddon who is arguably the best manager in baseball). Martinez is also a former player, so he will command a lot of respect from the current players. This is the man that the Sox need to hire, right now!

Signing pitchers like Grienke and Zambrano will make up for those lost now and in future free agency, as they are younger and can make better long term contributions to the team. Both of these guys want to play for a contender, and if the Sox can bounce back and have someone like Martinez at the helm, getting these guys to sign on will not take too much arm twisting.

With all the money freed up from the big Trade, the Sox can make a run for the best batter in the free agent market. Josh Hamilton hasn’t been able to re-sign with the Rangers, and I don’t see that happening anytime soon. With a booze ban in the locker room, the Red Sox clubhouse just might be the best thing for this MVP-Calibre player…

6) Let Ortiz sign with a new team, get new DH

After griping about how badly the Sox treated him last offseason, I think the Sox are better off letting Pappy go and sign with a new team. At his age, the numbers are only going to get lower. They’re better off getting a new bat that will produce better numbers and not as much whine to go with the cheese.

7) Put all players on notice: be professionals or else.

This can’t be emphasized enough. If management is ever going to regain control over their players, they have to make one thing perfectly clear: no one is untouchable. If you are not going to follow our rules, you’ll be the next to go out the door. Once management has control of the locker room again, things are bound to get much better.

If Red Sox management were to do something remotely close to the steps I provided, they would have a better shot at making the playoffs than they did this year. Will they do something like this and try to get back into the picture? Will the Sox continue to blow up the team and go into a full rebuild? I’m not sure, but it will be very, very interesting to see what happens as we go into the next off season. The AL East isn’t getting any easier, so Red Sox fans might have to be a little patient while management tries to build a new winner. How long will that take? Your guess is as good as mine…