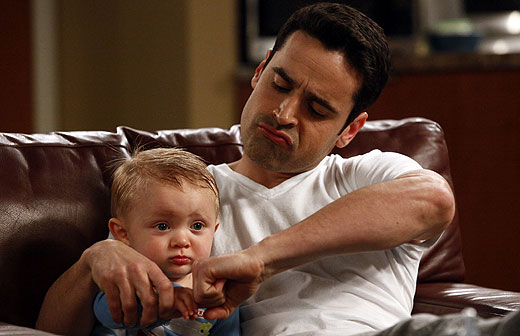 Dalton Ross and the rest of the folks who do EW’s Inside TV Podcast (which I generally adore) think Guys with Kids is terrible. They went after it really hard and basically came to the conclusion that if it’s not canceled early it’ll be all because NBC’s beloved Jimmy Fallon is the producer. So I wasn’t expecting much. But I love when that happens, because low expectations allowed me to be pleasantly surprised by Guys with Kids, the pilot anyway.

Technically, it could use a lot of work. Many of the jokes seem jammed instead of built into the scene, and I spotted more than a few continuity errors in the editing. The writing could be sharper, the characters more fleshed out, and the direction generally just more competent, but I do like the foundation of the show. Anthony Anderson and Zach Cregger are both incredibly likable with standout comic timing and Jesse Bradford- as a recent divorce with a controlling ex-wife and the Cutest Baby Ever- is a strong and easy leading man. This sounds odd, but the baby casting is also really good. I can’t speak to all of them, since there are 7 kids in total, most of whom haven’t had much screen time, but the baby -or babies, twins I’m assuming- playing Ernie (the son of Bradford’s Chris and Erinn Hayes’ Sheila) is Amazing (he makes amusing faces, has bizarrely good timing, and isn’t a well-behaved robot like most showbabies). The funniest part of the pilot episode comes at the big resolution to the problem of the day (Chris wants to go on a date, Sheila won’t let him hire a babysitter- hijinks ensue) when Ernie starts randomly pulling on Bradford’s lip while he’s trying to finish his lines. Bradford takes it like a champ and just laughs through it, which is exactly what a parent would do. You’re trying to discuss the idealogical divide that’s dictating electoral conditions and whoops, there’s a baby finger in your nose. It happens. It’s funny every time. And I liked that Bradford didn’t yell “cut” and the show didn’t choose a different take. That’s what I like best about Guys with Kids. The three guys at its centre not only feel like real friends, they feel like real parents, which is supposed to be the point, after all.

For the record, two of the three also feel like real husbands. Cregger’s wife is played by the daughter of Tony Soprano and Anderson’s by the daughter of Cosby (or rather Heathcliffe Huxtable- doesn’t it bother you people that no one in The Cosby Show was named Cosby? Why didn’t they just call it “The Huxtables” or the characters the Cosbys?). Tempestt Bledsoe (who played Vanessa on The Huxtables) is the only actor on the show who’s still a bit stiff, but she’s great with Anderson and I like their “4 kids and a broken TV” premise. But my favourite parents on the show are definitely Cregger’s Nick and his wife Emily (Jamie-Lynn Sigler), mostly because they’re cute together, amusingly exhausted (“okay, I’m chasing you” he says, while determinedly not chasing his daughter) and he’s the funniest of the three guys. I also loved his makeshift Titanic evening at the end of the episode (and particularly when he undercut it by pointing out that “the biggest diamond in the world’ also contains lipgloss). Erinn Hayes doesn’t have much to work with yet beyond a shrewish plot-moving character who’s mostly there to cause trouble for Chris. But there’s too much good intention behind her craziness in the pilot episode for her to stay in shrew territory long.

I’m hoping for the best with Guys with Kids. I love Fallon and I, surprisingly, really like his show. Here’s hoping it not only survives but actually keeps getting better to the point where Dalton and his pals will be glad it did.