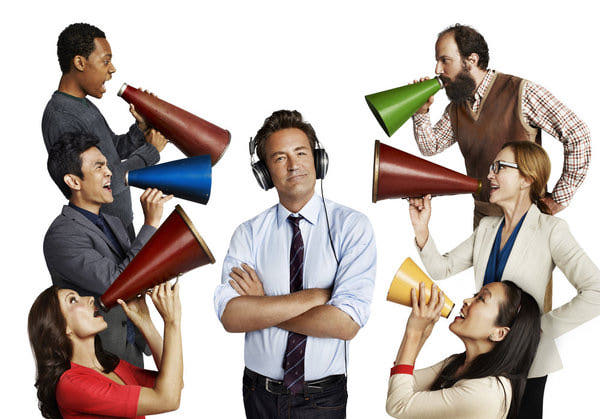 I really did have my fingers crossed for Go On. I wouldn’t say my hopes were all the way up, since the premise – snarky sportscaster Matthew Perry is forced into group therapy after the death of his wife- sounded tired, but I really was hoping for the best, if only for Perry’s sake. (Also for the sake of the great John Cho and creator Scott Silveri whose adorable last effort, Perfect Couples, went bust before its time).

Since 1994 I’ve carried with me great unconditional love of the Friends. You know, the Friends from Friends. I love them. And since 1994 was very early in my life, it feels like I’ve always loved them. And I will undoubtedly love them forever. Friends was the first show that ever captured my imagination to the point of loving TV just because that one show was on. It wasn’t like ABC’s TGIF- a block of shows I would look forward to all week even if they replaced my beloved Boy Meets World with The Hughleys or Reba. Friends was an exercise in loyalty for my childhood self, and I stuck with it all the way up through season 10 when everyone else said it’d lost the funny. That cast was the last time TV Stars were treated like Movie Stars and they remain, to this day, the greatest television ensemble in history. All of this is to say that I’ll go see whatever stupid movie Jennifer Aniston’s in this week and am a loyal Cougar Town AND Episodes viewer; I’ve even tried to become a Web Therapy fan (though that one’s slower going). Sure, I really do like Cougar Town and, especially, Episodes, but I tuned in out of sheer Friend loyalty. A loyalty that’s not going away anytime soon.

So when it comes to Go On, I’m dragging myself to the TV for what promises to be yet Another failed Matthew Perry show (after the sadly mishandled Studio 60 and the Really Actually Good Mr. Sunshine). I’m doing it against all my better judgement (the show, really, is not promising) because Chandler, by a huge margin, was my favourite Friend, meaning that while I’ll give a Lisa Kudrow pilot a shot, I will show up for Matthew Perry anytimeslot, anychannel, for a full season if I have to (or longer if some idiot at NBC decides to not cancel this thing). Anyway, that’s my big explanation for watching this dreadful show. I love Matthew Perry and have since I was a kid- giving him the sort of childhood crush power that only he, Jonathan Crombie and (mostly) Joshua Jackson possess- so I like Go On more than I otherwise would, and certainly more than you should, because if you don’t have the Matthew Perry unconditional love thing going on, Go On is really really annoying.

The first episode is much better than the second, though I’m unsure what’s actually being called the “premiere”. The pilot aired in the summer as a post-Olympics NBC viewer grab. I was expecting it to air again when Go On slipped into its regular timeslot last night; it did not. Instead, we got the second episode of the series in the “series premiere” spot and god help anyone who tuned into that without seeing the first offering.

The pilot fills in the backstory of Ryan (Matthew Perry)’s wife, her death, and the Epic Heartbreak he’s left with. It also tells you why a closed-off, self-involved, too-cool-for-his-own-good blowhard would ever actually be in group therapy (that old TV pilot trope: he’s forced, then decides to stay because it’s helping even if he won’t admit it). Both pieces of setup are completely necessary if the audience has any hope of liking the protagonist (Ryan is a typical sarcastic Perry character but so far doesn’t have the charm or wit of his predecessors). The best scene of the pilot also accomplishes the otherwise-overlooked task of introducing the supporting characters whose problems (ranging from cat death to person death) have landed them in therapy alongside our protagonist. At the suggestion of trouble-makin’-newcomer Ryan and behind the back of Laura Benanti’s rule-happy, anxiety-filled, convention-promoting group leader Lauren, the group plays a game of “March Sadness”. The supporting characters are actually pretty decent (well, some of them) and March Sadness shows them off well as they compete their way montage-style through a brackets tournament determining who has the saddest sob story. I’m particularly fond of Tyler James Williams’ mostly-silent Owen and Julie White’s bitter widow Anne as well as the tournament winner Fausta (an expressive and fun Tonita Castro, speaking entirely in Spanish). Most of the other characters (including Lauren) are ridiculous- there’s a cat lady, a weird guy, an old/black/blind guy, and a stick-in-the-mud- and don’t look like they’re likely to improve. But Owen, Anne, and Fausta are fun, and March Sadness was a great introductory device (and joke machine). The ending of the pilot is also great as the group dresses up and chases after the Google Earth camera (at Owen’s soft-spoken suggestion, no less). I love any good LARP-ish costuming moment and the goofy concept was a nice moment of therapeutic release (and silent happiness) in an episode too bogged down with its own expository ideas.

I point out all the good stuff in the pilot because I’m bored of having to tell you that the rest of it was predictable, formulaic and forced. The second episode was just more of the same as Ryan overstepped and tried to fix the life of one of his groupmates (the cat lady) and tortured his assistant with his helpless need to not be alone (it was about 35% sweet, 65% workplace harassment). Blah blah blah blah blah. I’m torn. I wan’t Go On to survive because I like the people working on Go On. But if it does survive, it’ll likely just make me angry that some stupid executive canceled Mr. Sunshine and what we got to replace that great, sardonic show was this formulaic blandness. Go On is stupid, but I would like for you to watch it anyway. Would you do that for me please? And if you can’t do it for me, you know you want to do it for Matthew Perry!