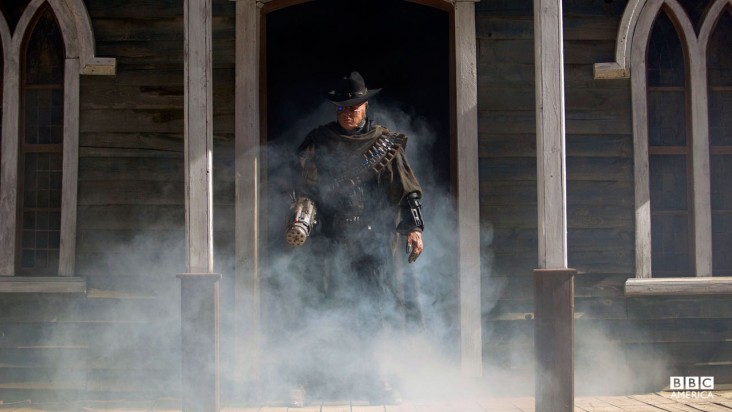 This week in Doctor Who, we take a trip to the Wild West. Or, Doctor Who’s version of it.

Open with a spaceship crashing. The survivor of the crash comes face to face with a cyborg gunslinger. The Gunslinger shoots the man. The man asks if he is the last one. The Gunslinger replies, “There’s one more: the Doctor”.

After the credits, the Doctor and the Ponds arrive in a little town in the middle of nowhere. The trio wanders in and sees an electric streetlight, which the Doctor says is at least 10 years too advanced for the town to have.

Upon entering a saloon, the Doctor is asked his name. After he says he is the Doctor, and confirms that he is an alien, the saloon patrons pick him up and throw him out of town. The Gunslinger approaches the town. It’s starting to look pretty bad for the Doctor, until the Marshall, Isaac orders the townspeople to let the Doctor back in. The cyborg vanishes.

Back in his office, Isaac explains the Gunslinger appeared three weeks ago. No one is allowed to leave town until they give the Gunslinger an alien named ‘The Doctor’. Isaac stopped the townspeople from letting the Doctor (our Doctor) die, because he is not the Doctor the Gunslinger is looking for. That Doctor is in a jail cell. He introduces himself as Jex. (Thank goodness, because if there were two alien Doctors, this recap would be the most confusing thing ever).

Jex is a Kahler- a species of alien distinguishable by their intelligence, and the black markings around their eyes. Jex was a surgeon on his planet, but his spaceship crashed near Mercy, and was damaged beyond repair. Isaac and the townspeople rescued him, so to repay them, Jex treats their illnesses, and gives them electricity, generated from his spaceship.

The Doctor decides to get his TARDIS so he can transport everyone away to safety. Rory and Isaac serve as a diversion while the Doctor rides out into the desert. He finds the cable feeding electricity to the town, and follows it to Jex’s spaceship, which appears undamaged.

When the Doctor opens the spaceship, it makes a loud alarm sound that both the Gunslinger and Jex hear. The Doctor accesses Jex’s personal files from the ship’s computer. He finds records of Jex’s deceased patients.

Jex points a gun at Amy, and says the Doctor should have followed their original plan. When the Doctor exits the spaceship, he is confronted by the Gunslinger. The Gunslinger says he didn’t enter the town to get Jex, because he doesn’t want to kill any innocents, but warns the Doctor that if anyone else leaves town, he will kill them.

The Doctor returns to Isaac’s office, where Jex tries to explain away holding Amy hostage. The Doctor calls him on his lies and calls him a murderer. Jex says he is a war hero. Back on his planet, Jex and his team created cyborgs-half man, half machine- which quickly ended a long-lasting war. But during their experiments, they tortured and killed some of their patients. When the war was done, Jex decommissioned the cyborgs, but one came back, and started hunting down its creators.

Isaac still doesn’t want to give Jex up, because Isaac believes in second chances. Rory argues that giving up Jex will save the town. Amy also wants to save Jex, and the Doctor initially sides with her, until Jex says the Doctor is just the same as him, he just lacks the nerve to do what is necessary.

The Doctor throws Jex out of town. Amy says they have to be better than Jex. The Doctor relents at the last minute, but not before the Gunslinger reaches them. Just as he is about to kill Jex, Isaac pushes him out of the way, and is shot. Before he dies, he tells the Doctor to look after everyone, and protect Jex. The Gunslinger says they have until noon the next day to hand Jex over, or he will kill everyone.

The townspeople debate whether or not they should surrender Jex, but the Doctor convinces them not to. Jex admits he feels guilt over his past crimes, but says everyone has a burden to bear.

The next day, the Doctor meets the Gunslinger in town. It has the makings of a great, classic western scene. Two men, scowling at each other as they reach for their weapons. For the Doctor, it’s is his sonic screwdriver, which makes the Gunslinger lose control. He starts shooting at the Doctor, but misses.

Rory, one of the townspeople and the Doctor painted facial markings similar to Jex’s on themselves, which confuses the cyborg’s identification systems. They run around, distracting him as Jex flees town. The Gunslinger eventually catches the Doctor, and demands to know where Jex is. Jex comes on over a loudspeaker, and tells the Gunslinger he is in his spaceship. He knows that if he runs, the Gunslinger will follow, and more innocent people will be affected. Instead, Jex commits suicide, by having his spaceship self-destruct.

With his last enemy dead, the Gunslinger plans to kill himself, feeling he does not have a purpose. The Doctor suggests he can protect the peace. The Gunslinger stays behind, and watches over Mercy.

This was another overall solid episode. I was glad to see they addressed the fact that the Doctor is becoming darker. It was my biggest problems with last week’s ‘Dinosaurs on a Spaceship’, so it’s good to see it is part of an arch, and not just a random occurrence. Amy was right when she told the Doctor he had been travelling alone too long. I’m curious to see how this storyline is going to be resolved, especially when we see the Ponds’ increasing reluctance to travel with the Doctor, or at least, travel so frequently.

I also want to take a minute to point out how pretty this episode was. After a week on a post-apocalyptic Dalek planet, and another on a dark, grungy spaceship, this week’s setting was beautiful. The desert landscape was stunning, as was the endless blue sky. The director and crew did a fantastic job of capturing the feel of classic westerns, with a Doctor Who twist.

If I were going to be picky, and choose something I didn’t like this episode, it would be that Rory felt severely underused. I am biased because Rory is my favorite member of Team TARDIS, but his role in this episode fell mostly under the “bait” category. The Ponds have two episodes left, so I hope they will both be given plenty of time to shine.

PS. I know this was a western themed episode, but why do the Doctor Who writers always write Americans as having guns, and lots of them? Really guys? We’re not that bad…are we?

PPS. If I ever go to a saloon, I’m going to ask for what the Doctor ordered. “Tea. But the strong stuff. Leave the bag in.”