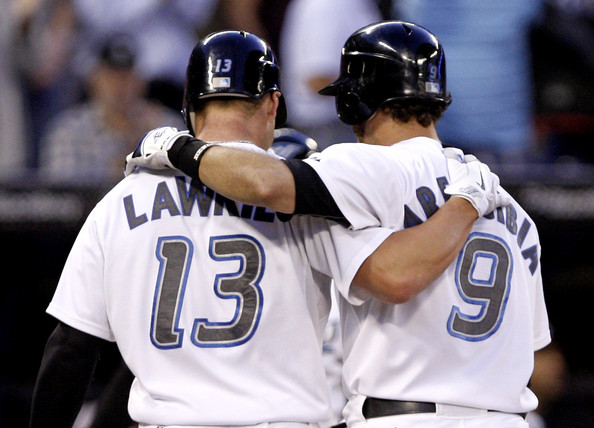 *UPDATE* Before you read this article, you should know that just a few minutes ago Lawrie and Arencibia’s good friend and former housemate Travis Snider was traded to the Pittsburgh Pirates. He was pulled out of the Seattle game in the 8th inning to head south in exchange for RHP Brad Lincoln. Snider’s been with the Jays for a long time- up and down from the minors the whole time- and will be greatly missed by Jays fans wishing Alex Anthopoulos would leave us with even one recognizable face. The injured Arencibia tweeted from the bench: “Going to miss my boy @Lunchboxhero45 [Snider’s goofy handle] … Been together a long time!”.

Every Toronto Blue Jays fan knows about the epic bromance going down between third base and home. In fact, the adorably boyish friendship between two of Toronto’s best and most beloved players has been a source of great amusement for over a year now. They room together, they have twitter wars, they are the two men at the forefront of the absolute goofiest things any Blue Jay has done in recent history.

At the Rogers Centre, one out of every two jerseys says the name Lawrie on it because the 22-year-old, uber-competitive, volatile Canadian is the future of the franchise. His best buddy, on the other hand, probably isn’t long for this team considering the talent coming up behind him in triple-A. That sad truth aside, JP Arencibia is a favourite among fans (specifically the female ones) and a great catcher to boot (except when he breaks his hand and is stuck on the bench for weeks- nice going, JP). Together, Lawrie and Arencibia are a hilarious, spontaneous, downright fun duo for the ages.

During Primetime Olympic coverage tonight on CTV, viewers were treated to this gem of a video. I don’t know what it could possibly be a promo for or who had the nutty idea of setting it up but it shows off Lawrie and Arencibia at their goofy, bro-y, competitive best as they take on two mighty teenagers who are national champions at table tennis.

I also feel that you should be made aware that THIS PICTURE exists.

I apologize for any harm this may do to your respect for pro athletes. And to your eyes.