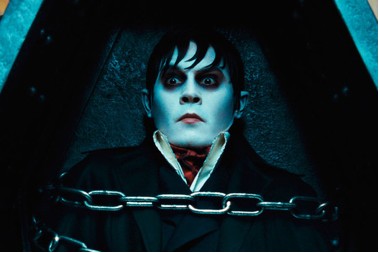 While most of the movies made by Tim Burton are pretty fun, even he is capable of making a dud every now and then (while many disagree with me, I was never very fond of his version of Alice In Wonderland). Burton’s version of Dark Shadows , on the other hand, reminded me of one of his better films, Sleepy Hollow. It had a very similar atmosphere, very gothic, despite the fact that a good portion of it was 1970’s trippy.

Based on the campy soap opera of the same name, there are a lot of little touches in Dark Shadows the film that are nods to the series, and I got a big kick out of that- the acting suggests soap opera melodrama (which makes sense). I especially liked Michelle Pfeiffer as the matriarch of the “modern” Collins family. The comedy is really toned down and fits nicely with the bigger dramatic moments. To me, it was a lot of fun. Oh, and I loved Barnabas’s reaction to the lava lamp, which is quite symbolic to how he was responding to being in the ground for so long.

Plot wise, the film has a good story to work with but the execution feels a little rushed. With so much ground to cover in so little time, I felt like I was served a fast food burger rather than a prime rib steak. Still, Burton knows funny and this film has a lot of great laughs. It also proves once again that teaming up with Johnny Depp is a surefire winner, regardless of what genre the film is made for- I actually thought this was an improvement on their last collaboration.

While Dark Shadows is nowhere near Burton’s best work (with or without Depp) it is still a good film that I’m sure his fans will all find very amusing and highly entertaining. Its humour, while dark, is still funny and flows well to a very tightknit but slapped-together conclusion with obvious hints at a possible sequel. I’d recommend it if you are a fan of Burton’s work. But if not, this might be a video rental/On Demand order waiting to happen. A good film to watch and enjoy, but hardly what I would consider to be the year’s or summer’s best