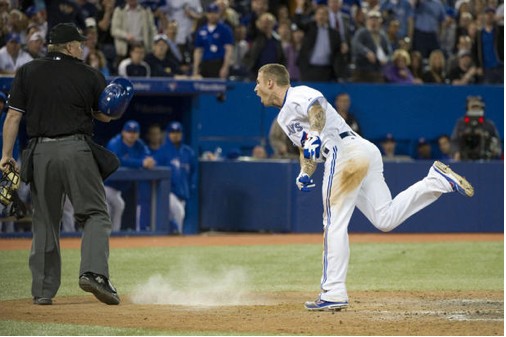 There’s been a lot of rumbling going on in baseball lately. Players have really been losing their cool around umpires over some pretty questionable calls. This is baseball, and with human officials comes human error- I know this to be the case more than most people because for almost half a decade, before I left to attend university, I was an Umpire. I used to be the guy behind the plate calling balls and strikes, and I can understand the pressure and stress that an official has to endure to make sure the game carries on in a timely manner and most of all, is called fairly. Sometimes that is not an easy feat to accomplish. I always told people that the reason why officiating any game wasn’t easy was because no matter which call you made, there was always going to be one side that likes it, and one side that doesn’t. For every single call you make on the field. But for those who love the game, being an Umpire is one of the coolest things someone could do because you have the best seat in the house and you’re there to make sure the game goes on and is played fairly with integrity and good sportsmanship.

I was watching when Brett Lawrie tossed his helmet and had quite an epic ‘George Brett’ moment a few weeks ago. Lawrie had every right to be upset about what had happened, but he had no right to toss his helmet at the ump. His blatant disrespect for the Umpire lead to further abuse when a fan tossed a full beer at the ump while he was exiting the field. Players need to set the example and be respectful of officials or fans will follow their lead, and that’s not a place where we want to go. Lawrie got suspended for four games for his on-field tirade, but I happen to think that more should have been done. The two pitches leading to the incident in question were themselves very questionable, but as an former umpire myself, I have witnessed such incidents occur before and it has nothing to do with the game, but ego. When what looked like ball four came across the plate, Brett Lawrie started to make the jog to first base. He waited two seconds before doing so but, several steps later, the ump called strike two.

You could tell by Lawrie’s response that he didn’t agree with the call, but he walked back to the plate and took the next pitch. The next pitch (which looked a little high) was called for strike three and that’s when it all hit the fan. Now, there are some people who believe the next pitch was the umpire’s way of getting back at Lawrie for showing him up by jogging before the strike call. This looks to be the case here, which I think is completely unprofessional if this is in fact what the Umpire did. I’ve had players make a premature jog to first base, and when I made the strike call, I would laugh and say something like “Not so fast squirt, get back to the plate.” I’ve even done that to players who were hit by a pitch but made little-if any-effort to get out of the way, calling them back to the plate to punish them for their attempt to steal a free base.

I don’t have to tell you that being an umpire requires a bit of a thick skin. You’ve got managers screaming in your face, kicking dirt on your feet, butting you with the bill of their cap and what not. I’ve had to toss out a lot of players and managers for their antics and disrespectful behavior, but what happened to Brett Lawrie I thought was not professional, it was personal. It’s one thing to take something personally, but to let it effect how you call the next pitch or play is not becoming of a good umpire. If I was the umpire who called Brett back to the plate, I wouldn’t have let the incident affect how I called the next pitch, which was in my opinion a ball. On the next pitch, I would have called it a ball and then told Lawrie, “Now Sir, you may take your base” with a playful tone to let him know that there is no offence taken and that we’re all here to play the game.

But this umpire took things personally and in turn made a call that likely cost the Jays their chance to mount a 9th inning comeback. To me, that kind of professional misconduct should have gotten the umpire suspended along with Brett Lawrie. MLB Commissioner Bud Selig shouldn’t take this kind of ego from his umpires or their union. If they show this kind of attitude and unprofessionalism towards the game, they should be suspended, docked pay and even fired if the situation is extreme enough. If an umpire was ever caught gambling on baseball games (like an NBA ref was a few years back) I have no doubt Selig would toss that Umpire out of baseball until the end of time. There are some things we know that MLB will not tolerate from their officials, but I think the kind of conduct we saw during the Brett Lawrie incident is something MLB shouldn’t tolerate from their officials either. They are paid to be professionals and to conduct themselves with respect. If they are incapable of doing that, they should face the music and be held accountable for their actions.

All of these blown calls are now costing teams some rather important games, and that has brought instant replay back into the discussion. With today’s technology, why should we let any human error take place in the game today? As long as it doesn’t delay the game, I can’t see why instant replay shouldn’t be allowed in moderation. I don’t think instant replay should interfere with stuff like balls or strikes, but if it came down to a trapped ball on the outfield where the ump might not get the best view, I happen to think that it would benefit everyone to make sure the right call was made, especially during vital games.

The Brett Lawrie incident happened to a rookie in Toronto. If that incident were to happen in New York, Boston, or even Chicago for example, a full scale riot could have broken out and someone could have been seriously hurt, possibly the umpire. This kind of conduct needs to be addressed before it becomes a criminal incident. I’m very sure no one, not the commissioner nor the Player and Umpire unions want to see any of that happen, so it’s up to them to make sure it doesn’t.

Umpires need to realize that if they allow their ego to get in the way of how they do their jobs, replay will become more and more of a reality and they will be under a sharper and sharper microscope. They need to get their act together and accept a little accountability or there will be a greater presence of instant replay in baseball in the not-so-distant future. Umpires are not above reproach, and they need to be held accountable whenever they are not professional, and Mr. Selig needs to step in and make something happen or it’s just going to get worse with each incident.