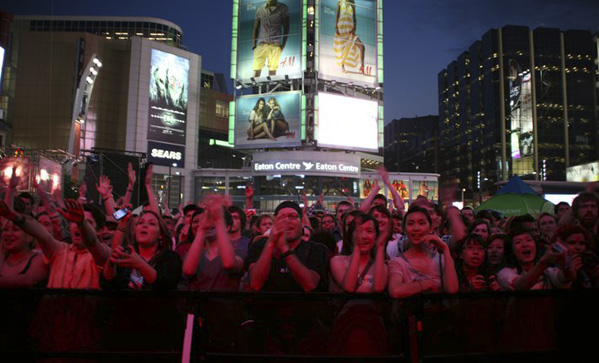 If you happen to be in the area, or happen to be making your way to the area, the North by Northeast Festival and Conference (NXNE) 2012 certainly promises to be damn good time. Coming into its 18th year, NXNE has drawn in over 300,000 people during the span of seven days, packing serious music fans into venues and onto streets right in the heart of Toronto, Canada. The festival aims to satisfy your musical itch, whether you’re the avid concert goer or indie film freak, by providing entertainment, conferences, and film screenings over the course of seven days.

What promises to be the summer’s biggest music festival will play host to a roster of 650 bands, drawing in major label veterans and hyped about headliners like The Flaming Lips, Bad Religion and Hollerado. The lineup is packed with tons of indie and up-and-coming musicians, ready to show the music biz and its fans what they have to offer, making this the perfect opportunity for music lovers to see what’s out there and discover new musicians and artists to obsess over. Though the wristbands and tickets are on the pricey side, fans can expect free shows and events for the duration of the festival, not to mention plenty of free concerts at Yonge and Dundas Square.

If you’re more of a hardcore movie critic, NXNE will be screening more than 40 independent films, music-themed features, documentaries and shorts from around the globe. Many of the films, such as My Father and the Man in Black, created and directed by Jonathan Holiff, (which follows the life and secrets of Johnny Cash as revealed by manager Saul Holiff) will be making their Canadian or world premieres during the festivals screenings.

The festival will also be offering symposiums during their NXNE Interactive (NXNEi) digital media conferences. The talks will bring together industry professionals ranging from marketing and business experts to content artists to tech engineers, who will be taking part in four days of workshops and presentations, for those wanting to learn the new tips and tricks of the music and film biz.

So whether you are a fan or budding musician looking to rub elbows with the right people, NXNE is definitely an experience you’ll want to take advantage of.

NXNE will take place in Toronto from June 11-17, 2012. For schedules, a full list of headliners and more info visit nxne.com.