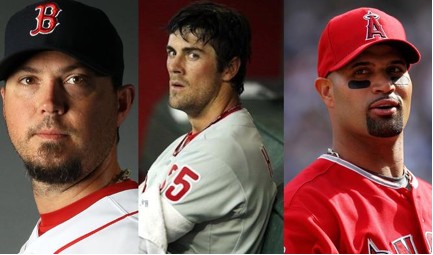 Being a professional athlete is a dream that most children aspire to, and I’ll be the first to admit that I was no different. I grew up watching athletes do amazing things, but I was too naïve to understand that, like in every other job, being an athlete has its good days and its bad days. Sometimes the press and the fans can make life difficult for an athlete, especially when they are not playing as well as their inflated salaries demand they do. No man (even athletes) is perfect, and fans need to understand that there will be good times and bad times for every athlete and team. But that won’t stop some people from jumping all over certain players and ripping them. Sometimes athletes need to be humbled, learn from their mistakes and carry on, but rather than lecture about it, let’s take a look at a few examples of players who have suddenly become public enemy number one to their fans. Right now the game isn’t as fun as it used to be for these men.

Josh is not in a good place. Last year, he was one of the players who was scolded for drinking during games between starts (Meanwhile, on the diamond, The Sox blew an eleven game lead and ended up not making the playoffs). And, already this season, Beckett has managed to find new ways to anger his fan base and make the boo birds come out during home games.

Beckett was scratched from a start because he complained of muscle pains in his shoulder. A few days after that scratched start, he was seen on the links, playing a game of golf. To baseball fans, this is equal to someone wearing a neck brace out in public then getting caught dancing when they’re at home. Considering the Red Sox are in last place, this is the last thing they needed: more bad press.

To make things worse, when Beckett did return to the mound, he was creamed by the Indians and was booed by his own fans after he was removed from the game by manager Bobby Valentine. Sox fans are known for making themselves heard, and that night they let Beckett know that they were not happy with their ace at the moment. The fans were right to bring out the boo birds that night, because that kind of behaviour is unacceptable from any athlete, but this is also coming from one of the players who was drinking on the job (so to speak) during last year’s collapse. Beckett didn’t help matters by attacking the press for ratting him out for playing golf, stating that what he does in his free time is no one’s business. Not the best response considering the satiation.

Beckett doesn’t understand what the big deal is, and that angers the fans even more. Even though I don’t doubt he had just reason to not make a start, playing golf just a few days later would suggest that Beckett might have exaggerated his muscle woes and that kind of work ethic is unbecoming in someone who is being paid to play a game and is supposed to be a professional. I doubt Beckett will get anything more than a talk with management, and I don’t think that’s enough. If I was the owner of the Sox, I’d be telling management to fine Beckett for his off-field antics. After last season’s drinking scandal, management needs to step up and get their ace to start behaving a little more like a professional rather than defend his immature off-field antics. Will that happen? I doubt it but one can hope for Sox management to grow some minerals.

Mr. Pujols isn’t very popular in two cities at the moment. St. Louis is still reeling over losing their franchise player for next to nothing, but that’s the way the cookie crumbles. The Cards didn’t do enough to keep him and were, quite frankly, was too cheap in their attempts to get their MVP back. But the other city that doesn’t like him too much is the one actually he plays for, that being Los Angeles where the fans are none too pleased with the struggles he’s thus far this season.

When you’re coming off a World Series win and sign with a new team, fans are going to flock to see you play, roll out the red carpet and wave the signs with the hopes that you will bring a bit of that playoff glory to their city. Pujols left the World Series-winning Cardinals to sign a colossal contract with the Los Angeles Angels, and to say the fans are disappointed with Albert so far would be an enormous understatement. His poor play this season is out of character for someone who has been one of the most consistent players in the game, but Pujols is off to a rough start a month and a half into the season, and it’s starting to look like a long season ahead for the Angels who are currently, like the Red Sox, in last place in their respective division.

I can understand how Angels fans feel right now The team shelled out an colossal two hundred and sixty million dollars to obtain Pujols in the hopes that he would bring some of that post-season magic to their team, but two months is way, way too early to judge this contract, which is ten years long. There’s no guarantee that Albert is going to get better and this could quite frankly be the worst season of his career, but that doesn’t mean it’s going to go on for ten years, at least I hope not. Next season could be the best year of his career and this time next year these first two months could be a distant memory. Albert has moved to a tougher division, so I’m willing to give him a little slack, but I understand where the frustration is coming from. If the Angels were in first place, no one would care about Albert’s struggles, but as long as they are in the division basement we will continue to hear the fans jump all over his backs for not putting up his usual numbers.

Unlike Beckett and Pujols, Hamels hasn’t done anything to upset the fans, but instead he has drawn the ire of the league itself in the form of a five game suspension. During a game against the Washington Nationals, Hamels plunked rookie sensation Bryce Harper. After the game, Hamels admitted to hitting the rookie on purpose, stating that he was doing it to send an ‘old school’ message to Bryce. While plunking players to back them off is nothing new, Hamels has to realize the reason why pitchers in the days of ‘old school’ were never suspended for their actions was because they kept their mouth shut and never admitted it.

Then again, did Hamels’ suspension really make a difference? To a starting pitcher, missing 5 games really means nothing compared to what it would mean to someone who plays first or the outfield. Hamels only plays once every five games, so he would lose one start or just wait an extra day or two before his next start. Talk about a slap on the wrist.

But the reason why I mention this is because I want to compare Hamels to the previous two players to show the difference. Not a single Phillies fan is booing Hamels for what he did and the reason is painfully obvious: the man is throwing a killer season and has been lights out most of the time he’s taken the mound this year. Fans are willing to let immature behaviour go when the player is doing well. While his team isn’t doing too well, most can’t fault Hamels for that. Pitching has been doing all right, it’s offence that is non-existent in the city of brotherly love. If Hamels had a 3-4 record and the ERA of a cheap lunch, trust me, Phillies Fans would be booing him out of every game. Compared to the previous two examples, we can see that fans are willing to let some stuff go as long as you’re doing what is expected of you.

In conclusion; while I don’t think all three of these players deserve the backlash they are getting for what they did, I hope they learn from this experience and use it as an opportunity to grow as a player and professional. When your team’s not playing well, you had better be doing your best or your actions and off-field antics are going to put you in the crosshairs of fan backlash. I am confident that all three of these stars are bound to recover from these incidents and continue to be adored by their fans, but that is only going to happen when their teams start winning again and go back to the playoffs. So far this season, that doesn’t seem to look that good for some of these teams, so I would recommend these players try their best not to give their fans an excuse to get on their backs and make them the scapegoat for the team’s woes. If things don’t get better, while some players might prefer to have a change of scenery, that’s not an option when some players have contracts that are too large to move. Suck it up guys, this is the dream and while it may have its good times and bad times, there are millions of people who wish they were in your shoes.

Baseball is a team sport, however, so to blame one person regardless of their antics is unfair and the entire team needs to accept responsibility for their play. If I was a member of the Red Sox, I would stand up for Beckett. Whether or not I agree with what happened or not, he shouldn’t be blamed for everything that’s not gone right this year for the Sox. The team as a whole is not working and the fact that no one has stood up for any of the players above is a bad sign of where these teams are right now as a collective unit. Buckle up, fans because these three teams are not going anywhere this year.

Not that I have much room to talk. Like every fan who doesn’t like to watch their team lose, I have a few people I will not hesitate to blame when my team doesn’t make the playoffs this year, but I’m going to save that for another article, which I guarantee I will be posting the day my team (the Blue Jays) is mathematically eliminated.