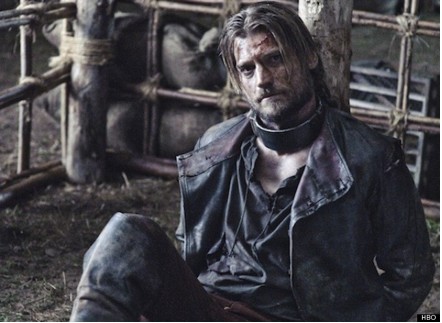 “A Man Without Honor”

Sometimes writing weekly about a show whose every major plot point I know in advanced is difficult. This week is one of those times. There are certain developments that I don’t want to even touch, for fear that I might spoiler-ify those of you choosing to go the all-TV route. So if it seems like some major pieces of this review are missing, that’s why.

Last night’s Game of Thrones, “A Man Without Honor,” was the funniest episode of the season to date. A lot of that comes down to the re-appearance of Jamie Lannister, who’s biting wit serves to alienate everyone from him (except for the distantly related cousin, who said wit draws in closer, only to lead to a brutal head smashing). I missed Jamie, and his appearance here reminds me of all the reasons why.

It also gives Catelyn Stark her most exciting work to date. Whether she’s being a badass and staring down the hordes who want Jamie’s head on a platter, or verbally sparing with the Kingslayer, Catelyn was in rarefied form last night. For those of you watching who have also read the novels, I also think that the way the whole confrontation between Jamie and Catelyn went down is way more effective than within the book, and actually strengthens Catelyn’s character. But more on that next week.

Also in Lannister/Stark relations, we have Arya and Tywin’s strange mentorship. You can see why Tywin, who has spent his whole life being ashamed of his children, clings so strongly to the tough, smart, manipulative young woman who waits on him. And once again, enough cannot be said about Maisie Williams’ performance as Arya, playing the perfect mixture between a young girl who has always wanted someone impressed with her and a vengeful budding psychopath hellbent on killing her enemies. I think the episode kind of sidestepped the fact that Arya’s recklessness last week led to a whole bunch of people getting killed this week, but I hope this idea is taken up more seriously in the weeks to come.

And then we have the Stark boys’ romantic comedy travails, both of which are unlikely to have wonderful outcomes. Robb Stark continued his flirtation with Jeyne, and even asked her along with him on his next mission. Jeyne herself seems to realize just how bad an idea this is. And Jon Snow, poor virginal Jon Snow, spends most of this episode getting sexually harassed by Ygritte. Rose Leslie, who plays Ygritte, is perfect casting, and the way she plays Ygritte as infinitely smarter than Snow is a nice challenge to the lad. Plus, we got the first of many “you know nothing, Jon Snow”s.  But all that romantic comedy verbal foreplay (and talk about boners, which was pretty funny in a 13-year-old way) led to Jon’s capture by wildlings at episodes end, proving that one should never be distracted by red heads (are you listening Stannis?).

The most heart breaking moment award this week is a toss up between two characters who seemed unlikely to elicit much sympathy during Season One. The first of these is Cersei, who has been softened somewhat from the book’s portrayal of her and to great effect. Cersei and Tyrion’s heart to heart this episode, in which Cersei admits that her son is a monster she can’t control and that she worries that this is her recompense for her happiness with Jamie, bordered on kindness. Tyrion and Cersei may not often seem eye to eye, and Cersei as much as any character seems fond of blaming every bad thing on her brother, but there is more than just familial loyalty between them.

But I’m going to give the award to Sansa, who gets her first period and immediately sets about trying to stab her mattress to get rid of the evidence. The addition of Shae as her surprisingly intense partner in crime is a welcome one. It serves to deepen our affection for Shae, and help to show just how desperate this moment is for Sansa. Cersei and Sansa’s final “you’re a woman now” heart to heart serves to further illustrate both characters’ heartbreak, and how trapped these two disparate women are by their circumstance.

Danaerys’s storyline this week is mostly trippy, and it is also a huge departure from the book, and once again it is a huge departure that I kind of love. I actually turned to my roommate and said “wow, they’re just really good at this,” because in this episode every bit of added/changed scene felt like it deepened what the book had brought before it. Danaerys finds out that her dragons are being held hostage in the House of the Undying, right before the creepy corpse man kills all the other members of the 13 (save himself and Xaro). Danaerys’s subsequent attempts to flee are the show at its arresting best.

And last we have Theon, still chasing after Bran and Rickon as they flee Winterfell, and still feeling the sting of being considered less than a man in the Iron Islanders eyes. As we saw last week, as Theon ineptly hacked off a man’s head, all this pressure is turning the often pathetic little man into an even more dangerous foe. A man so out of his own control can be made to do anything. And so the episode ends with the image of two tiny burned bodies, as Theon surveys the shocked and heartbroken denizens of Winterfell. This should be Theon’s proudest moment, his final conquering of Winterfell, but destroying the Starks was never Theon’s goal, and as he looks out on the people he grew up with, who now look at him with hatred and disgust, his face falls slack.

The episode’s title is A Man Without Honor, a title that could be slapped upon a number of our main characters at this point. Robb, for ignoring his contract with the Freys? Joffrey, for being Joffrey? Stannis, for kinslaying? The one who it is most often applied to is Jamie Lannister, who certainly seems honor-free as he bashes in his own cousin’s head with manacles in a failed escape attempt. But it most likely applies to poor Theon, who’s lack of honor has caused one of the show’s greatest tragedies.

Only two more episodes to go in the season, and I know we’re in for some majorly intense episodes. As much as I can’t wait to see what’s to come, I can’t believe I’m going to have to wait another year before I get to watch this show.