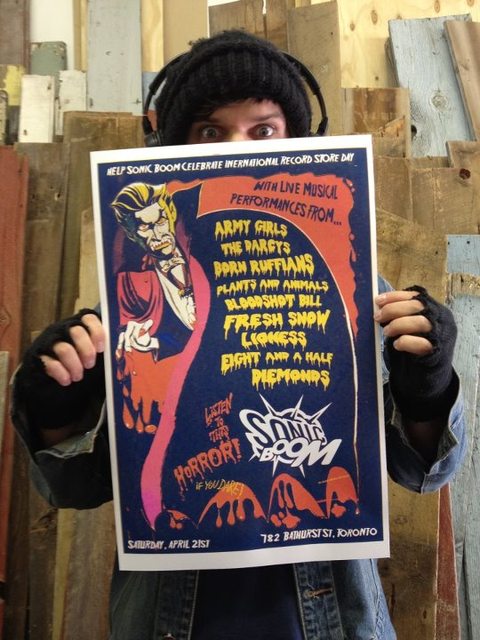 Every music buff has their day, whether it’s getting to see your favourite band live or finally heading to some epic festival along the lines of Coachella, or, if you remember, Woodstock. However, it can be the simplest days that outshine the memories of flashing lights, smoke machines and mosh pits. For myself (and tons of fellow music fanatics) this powerful burst of excitement comes from waking up to a day that’s almost as exciting as Christmas: Record Store Day.

For those who are unaware, Record Store Day has been running steadily for five years and was created keeping the spirit of independent record stores in mind. That means that your local record shop (the one where you spend hours upon hours sifting through some serious tunes, to the point where addiction settles in) is the coolest place to be (hipsters be warned).

With a goal in mind and song in my head I decided to head down to my favourite record store (Sonic Boom) and get into the spirit of one-day-only releases, live bands and free stuff. Unfortunately due the insanely rocking crowds and urge to dance along to the live bands, I was unable to search for any of the hot releases I had in mind. I was not bitter about this however, since the friendliness of the crowd spread like a plague and turned the record store into one giant rock festival (with headliners including Army Girls, Born Ruffians, The Darcys, The Elwins and many more).

It was a wonderful thing to see a massive crowd of music lovers gather together and sway their bodies in sync to the live bands. It was even enlightening to know that they were all there with the same mentality and love for their local music shop, celebrating it as a place of discovery and memory, rather than a market-driven ploy.

Even with the high surge of downloading within the music business there is still a huge number of individuals young and old, who crave the feeling of being able to hold that brand new CD in their hands, or inspect a floppy, dusty vinyl for scratches. And even though it’s been said time and again that record stores will slowly disappear, there are music fans everywhere that will tell you that sifting through the isles definitely beats scrolling through lists on iTunes. Going to record stores and seeing the tangible side of music offers you a sense of escapism and a way to experiment with finding new bands and artists. There is even something slightly mysterious about walking up and down the aisles of a record store, and spotting something completely out of your repertoire, simply because the album art drew you in. And it doesn’t even have to be a locally declared “record store day” to appreciate the tangible side to music, or to engage in a time consuming rant about your top five albums of all time.