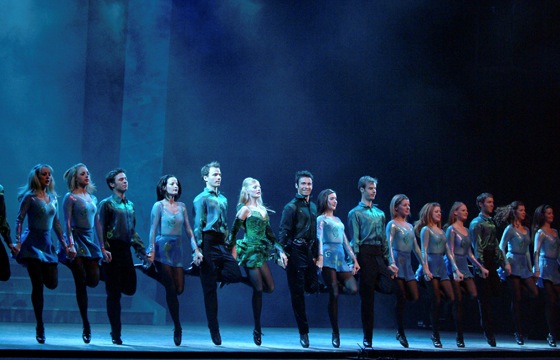 On Stage in Toronto: Riverdance

When I was a kid, I was completely obsessed with Riverdance and its far more linear counterpart Lord of the Dance. Obsessed. I would listen to the soundtrack in the car, make up fake Celtic words to the songs, invite my friends over to dance along with Michael Flatley on the old VHS. When my parents finally took me to see Lord of the Dance, the experience was ruined by the horrid woman in front of 7-year-old me turning around and insisting I “stop kicking her chair”- I was dancing, Hello! All this is to say that once upon a time I did in fact know just how astounding an artistic achievement Riverdance and Lord of the Dance are. In the years since my childhood Irish-dance enthusiasm, I’d somehow managed to forget. I was on that disaffected cool kid train where odes to the exuberance of dance are “dorky”, no matter how impressive. But my doll of a little cousin Taylor is in love with Irish dance so when Riverdance came to town, however briefly, I agreed to take her. And that old sense of wonder came instantly flooding back.

Riverdance is simply amazing. It’s better than amazing, it’s fun and uplifting and evocative and impressive all at the same time. The more theatre I see, I find myself doubting that those 4 adjectives can exist together. Things that are fun tend to leave most audiences un-provoked and things that are impressive and evocative are rarely much fun; they tend to leave a lump in your throat and a pit in your stomach. But Riverdance… I do not care if it’s the dorkiest thing to love in the world- I spent the rest of my night last Saturday at the uber hip Mod Club watching an avant garde jazz band with the cool kids, and I wished the entire time that I could just go back to Riverdance.

As Taylor and I danced up the aisle after the show, we couldn’t stop humming the soaring melodies that had accompanied the explosive dancing in the 2 hours previous. The music of Riverdance is sensationally beautiful, and while the pipe solos had me wishing the dancers would reappear to lighten things up, the rollicking fiddle pieces entertained all on their own (though I would have enjoyed them more had the audience clapped On The Beat when asked to join in). The set and lights are also sublime, telling the story all the more effectively with production values that rival the best of Broadway. I don’t think the random story about settlers is at all improved or clarified by the awkward voice-of-god narration, I’d dispense with it altogether, because Riverdance doesn’t need story clarification. This isn’t Lord of the Dance with its colour-coded good guys, masked villain and his troupe of ne’er-do-wells.  The story of Riverdance is in the emotion and expression of the dancers and musicians; it’s a cultural celebration, forcing an obscure narrative onto it does no one any good.

The stories told in individual dances are all the audience needs to understand the point of Riverdance. Most memorable is the showdown between contemporary tappers and Irish steppers, “Trading Taps”. Like the flamenco routine (but better), the number exemplifies the cross-cultural influences in both styles. The tap battle is also particularly funny as dancers from both sides mock the others’ style. It’s also damn impressive- but so is everything else. Lead dancer James Greenan was the standout performer the night I saw the current US/Canada Riverdance tour. He’s an insanely good dancer, that goes without saying, but there’s an energy and eccentric enthusiasm to Greenan’s performance that is downright infectious. He turns to smile at the other dancers (mid-routine!), encourage his chorus and generally looks like he’s having the time of his life. If you’re going to be a professional dancer, I really think that’s the attitude you should have towards dance. Greenan not only looks like he would rather be doing nothing else but dancing, but he makes the audience feel the same way. The brutally brilliant act one number “Thunderstorm” perfectly exemplifies how Greenan leads the male chorus with astounding skill, a sense of fun and dance-til-you-can’t-stand determination.

The female leads and full chorus are equally sublime, the latter showcased particularly well in the uproariously joyful “American Wake”, the show-opening “Reel Around the Sun” (which features unbelievable synchronization) and the famous “Riverdance” act one finale. It literally comes down to “I did not know human legs could move that fast”, because the performances in Riverdance are so unbelievable (though precocious little Taylor did inform me that “Riverdance is easier to get into than Lord of the Dance; it’s not as good”). I saw Lord of the Dance as a kid but now I can’t possibly imagine how anything could make Riverdance look easy.