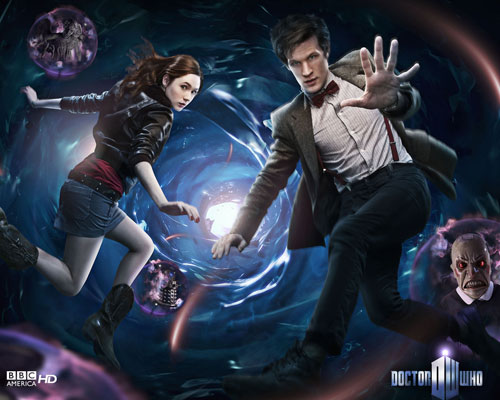 So there’s this British show Doctor Who. You may have heard about it. In a nutshell, it’s about an alien and his friends who travel through time and space in his time machine/space craft called the TARDIS (which looks like a 1960’s police box) as they face a new foe every week. It’s a show that is constantly changing and reinventing itself while keeping an essential quirky tone. One notable example of this is the good Doctor himself.

The titular Doctor has, to date, been played by eleven actors. The Doctor is a Time Lord – an ancient alien species. Time Lords can ‘regenerate’ when they are dying. On the show, this means every cell in the Doctor’s body changes and he gets a new face and personality. In the real world it means the BBC hires a new actor. Each incarnation retains a basic Doctorness: intelligence, eccentricity, bravery and compassion.

In 2005, the show was rebooted after more than a decade off the air. Since then, three actors have portrayed the Doctor. My favorite Doctor depends on which episode I’ve seen most recently. The highly underrated Christopher Eccleston played the ninth incarnation. Although he only starred for one series, he reintroduced the rebooted franchise and brought a dark edginess to the role. David Tennant then took over the part. His Tenth Doctor was giddy and gleeful, only to turn more and more tragic as his run continued. The Tenth Doctor is my Doctor- I started the show with him, so he will always have a special place with me. Matt Smith’s goofy and awkward Eleventh Doctor won me over within his first five minutes. He brought a sense of fun back to the TARDIS after several years of accumulating angst.

The Doctor is a protagonist that you love and sometimes fear. When the show came back in 2005, the Doctor was the last of the Time Lords after a long war with the Daleks- arguably the show’s most iconic alien antagonists. While usually excited and cheery during his travels around the universe, the Doctor sometimes reveals a darker, angrier side that you would expect from the last survivor of a species. Often times, the Doctor is eccentric, and filled with child-like enthusiasm towards life. Other times, he is world weary, and seems every one of his 900+ years.  Matt Smith especially excels at seeming ancient, even though he is the youngest actor to portray the character so far.

What keeps the Doctor going is the promise of adventure and the company of friends he makes along the way. Each Doctor has at least one companion who is a semi-permanent fixture in the TARDIS. One of my favorite things about the show is how the companions all start off as seemingly normal people. Through their adventures, they discover just what they are really capable of. The Doctor said it best when he argued “There’s no such thing as an ordinary human”.

My two personal favorite companions are Donna Noble and Rory Williams. Donna was the companion for series four, and she was played by the great Catherine Tate. She was David Tennant’s last companion. Tate and Tennant have phenomenal chemistry. Unlike previous companions Martha and Rose, Donna had no interest in being romantically entangled with Ten. Series 4 gave viewers a glimpse at two best friends travelling and having adventures together. Donna and the Doctor were made for each other, in a strictly platonic sense. Donna served as the Doctor’s much needed conscience and ego-deflater, and the Doctor made Donna see that she was truly special. It was a fun, uplifting series until the heart wrenching finale. Although it was sad to see Donna go, it made way for the current companions, husband and wife duo Amy and Rory.

Rory Williams (sometimes Rory Pond) is my other favorite companion. He only has five episodes left, and he will be sorely missed. Rory started off as a timid nurse who was a bit of a doormat to his then-fiancé, Amy Pond, and has become something of a badass. He punched Hitler in the face. I could go on about his badassness, but I think I made my point. And although aforesaid punch was awesome, Rory is my favorite for reasons best summed up by current showrunner, Steven Moffat: Rory is “brave enough to show when he’s scared, man enough to take his wife’s name, and so steadfastly in love [SPOILERS] that he’ll wait 2000 years and not complain once.” It’s too complicated to explain concisely why he waited 2000 years for his wife, but that’s a thing he did, and it was beautiful.

I’ll be holding my breath during Rory and Amy’s last episode, scheduled to air later this year. Steven Moffat has already said the Ponds’ last adventure will be heartbreaking. Given this show’s track record for companion departures, I plan to arm myself with a tissue box and large bowl of ice cream when it’s time for the Ponds’ final episode.

Doctor Who won’t be all tears this year though. The series 7 trailer which premiered at the first official Doctor Who Convention in Cardiff looks all sorts of epic, with many exciting guest stars (Filch and Mr. Weasley?!). Once the first half of the series is over, fans have the Christmas special to look forward to, when the new companion, played by Jenna-Louise Coleman will be introduced. There hasn’t been a companion yet that I haven’t liked, and there is no reason why Coleman will break this trend.

Coleman’s as-of-yet unnamed companion will be there for the show’s 50th anniversary, which will air in 2013. No word yet on what the show is planning to do, but one thing’s for sure- it’s an exciting time to be watching Doctor Who.

So, current time Whovians, let’s brush up on the old episodes before the new series starts. And for the newbies, you have until fall to watch six series. They’re all on Netflix. Go!