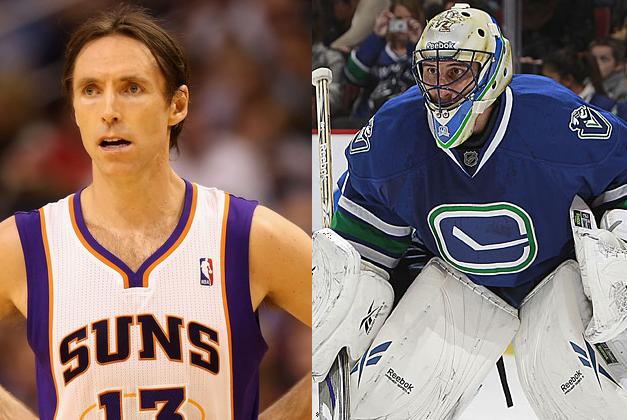 A No-Brainer for Raptor and Leaf Fans

Here we have two General Managers: Bryan Colangelo for the Toronto Raptors and Brian Burke of the Toronto Maple Leafs. Both GMs are going to be pressured to make a big splash in the off season to push their respective teams closer to being a contender rather than the pretenders they’ve been for the past few years. What both these General Managers have, walking into the off season, is the opportunity to possibly land an MVP-calibre player that could potentially bring both teams back to the post-season.

One of the biggest free agents available this off-season in the NBA is two-time MVP and BC native, Steve Nash. A few days ago, Nash played what could be his final game with the Phoenix Suns. On July 1st, he’ll be free to sign with any team of he likes, and this is where Bryan Colangelo needs to step in. There shouldn’t even be a single moment of hesitation. Mr. Colangelo should be in his office at midnight on July 1st so that he can contact Steve Nash’s agent at 12:01am and make him an immediate offer.

Any deal (no matter how rich) would pay itself off in less than two seasons. The fans would come out in droves to see Nash in a Raptors uniform and, unlike in past off-seasons, the Raptors are in a unique position to make it happen. Except for the Phoenix Suns, the Toronto Raptors are the team capable of offering Nash the most money. In a very weak Eastern Conference, Nash could and likely would elevate the Raptors to the playoffs and a chance to contend for a championship, which is what Nash is looking for. Combine his signing with a possible top ten pick in the upcoming draft, and the Raptors’ odds of going back to the playoffs look a lot better. For Mr. Colangelo and the Raptors, this is their definition of a no brainer: they have to sign Steve Nash.

Maple Leaf general manager Brian Burke is now in a very similar situation. Word has come around that Vancouver goaltender Roberto Luongo has placed Toronto on his short list for teams he would be willing to waive his no-trade clause for. Goal is a definite problem for the Leafs and was one of the issues that lead to last year’s big collapse. Now, one of the best goalies in the league is not only available but is open to the idea of being a Leaf. If Brian Burke wants to build a winner for next season, this is the ideal place to start.

The Leafs in net last season were something that fans would like to quickly forget. It looked very promising at the beginning, but crumbled into nothing and the Leafs were again outside looking in when the playoffs began. The pressure is on Burke to build a winner now and not start the whole process over again. The Leafs do have a good, young and very fast team that is capable of great things, but they need a go-to goalie. Luongo wants a team that will not question him and will have the confidence to make him the starter day in and day out. The Canucks have won the president’s trophy two years running, and yet their fans blame Luongo for their inability to succeed in the post season. With a better defence in front of him, Luongo would be a better fit in Toronto.

Since Gustavsson is a restricted free agent, the whole monster-in-net experiment will finally be over. It’s in the Leaf’s best interest to just let the Gustavsson go and pursue a new number one goaltender. An ideal situation would be to keep Riemer as the backup and allow Luongo mentor him into the goalie of the future. This way there is less pressure on Riemer and he can ease into the role of being the starter while Luongo makes his run for glory. This is the way the Leafs could handle their situation in net and it would appease many disappointed Leaf fans this off season.

If the Toronto Maple Leafs are going to take on a ten year contract without making Vancouver eat any of it in the process, the Canucks can’t shoot for the moon with their demands. That 5th pick in the upcoming draft should be untouchable. Offering a second or third round pick along with one decent player and paying the entire contract should be enough to entice the Canucks. With Schneider becoming a restricted free agent this off-season, the Canucks desperately need to clear some cap space and moving Luongo for players that will not eat up any of that space plays into the Maple Leaf’s hands. Burke has the opportunity to get what he wants and not pay too much to get it. Add on to the fact that it appears Luongo might be willing to waive his no-trade clause for the Leafs, this should be all the incentive Mr. Burke needs to make an offer to the Canucks.

The general managers for both the Maple Leafs and the Raptors have an enormous opportunity and they need to be all over it like a fat kid on a smartie. They have the ability and the inside edge to make a run for a player that could overwhelmingly change their odds to accomplish something next season. Both Luongo and Nash are franchise players, and they can be had if the general manager of each team is willing to make a run for them this coming off season. This shouldn’t even be a debate.

High calibre players like Steve Nash and Roberto Luongo don’t come along that often, and there’s no doubt they have the talent and the ability to bring the Raptors and the Leafs much closer to the post-season. To the fans of both the Raptors and the Maple Leafs, this is the definition of a no brainer, hands down.

No excuses guys, get it done.