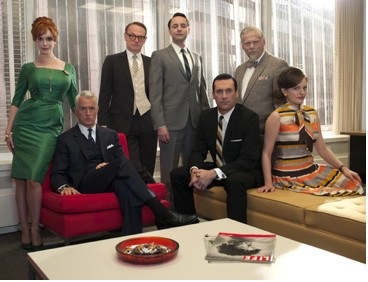 The Things Roger Sterling Doesn’t Want to Hear About

In the lead up to its 5th season premier, Mad Men has been inspiring a lot of pre-emptive coverage. Most of it is the usual fawning adulation, or a discussion of the fashion that has made the show so iconic, but quite a few have been reaction pieces by non fans. People who feel the need to explain why Mad Men isn’t their cup of tea. A lot of these articles come down to a singularly flawed thesis; namely, that these people don’t want to participate in a bunch of nostalgia porn for an era where African American people only existed as servants and bellhops and women only existed as secretaries and mothers (or, often, as the women you slept with who were neither). The past four seasons have been a pretty decided explanation of how the second point is false. As I’ve already argued, Matthew Weiner’s opus is actually one of the most nuanced and balanced portrayals of the rise of womanhood ever created. But as to the first point, aside from Lane Price’s ill-fated inter-racial Playboy Bunny affair last season and Kinsey’s “I’m so hip, I’m dating a black girl” rebellion in Season 2, the only significant African American character on the show has been Carla, the Drapers nanny/maid, whose personal life was necessarily subjugated to her role as the only true care-taker Bobby and Sally had ever known.  We already know that most of our characters take their racial prejudice along with them every day.

But this is the 60s, an era when we all know (with the benefit of fifty years on the characters) that attitudes towards race had to change*. And so the 5th Season of Mad Men starts not in the offices of Sterling Cooper Draper Price, but on the streets of Madison Avenue with a protest.  A group of non-SCDP employees (for another advertising agency) decide to respond to the rabble downstairs by dropping water bombs on them. It isn’t an overtly racist act – the men involved don’t babble about “white power” or “stopping the negro menace.” No, their racism is much quieter- they simply can’t conceive of the idea that the people protesting downstairs are human beings asking for basic rights. They have the privilege to sit high and removed from the sweeping cultural change and discrimination, afforded them by their middle class values and white skin. And it causes an arrogance that swathes them in the clothing of cruelty. At least until the protestors march up into their office, and force them to take notice.

Throughout “A Little Kiss,” the same thing happens to Sterling Cooper Draper Price, although it takes its time to get there. After that beginning sequence, the march onward of the 60s is pretty much forgotten, save some Good Old Boy pranking by the old guard of SCDP (Don and Roger) , but it sits on the events like a cloud. Our characters, in large part, are defined by their reaction to it. Roger is incredulous at the way the world is changing around him. Don sees only what benefits him. Peggy and Pete, alone among the power players of SCDP, see the sea change going on outside.

And where does “A Little Kiss” find our protagonists, besides sitting on the precipice of civil rights? Don and Meghan are happily (or at least lustily) married. Peggy’s still working hard and dating her hipster boyfriend. Pete is beginning to feel the sting of domesticity with Trudy while battling his own ambition. Joan is on maternity leave with Roger’s baby. Roger is still trying to figure out what makes him relevant. Harry has turned into a lascivious d-bag. Lane Price is a deeply unhappy, lonely man and teetering on the brink of financial collapse.  And Bert Cooper is sitting in the conference room, waiting for a meeting that is already over.

The episode, for the most part, feels lighter than most Mad Men offerings. The stakes are relatively low – an office here, a birthday party there. Our main characters are settled into a groove they are not yet ready to offset. They’re in a universe full of people striving for something better, but (with the notable exception of Pete), they’re mostly content with where they are. Peggy, observing newly-wed Don’s laissez-faire attitude towards the office, feels alarmed, and we’re meant to agree with her. SCDP has made it this far not because of the laid back boy’s club mentality of Roger and Don, but because of the feet-to-the-floor striving of Peggy and Pete.

Never is the clash of new versus old as apparent as it is at the extended sequence at the 40th birthday party of Don Draper- a party based on a lie, as it turns out, since the true Don Draper is dead and Dick Whitman has been 40 for months. At the party, social lines are quickly drawn between the old men who once ruled this nation (represented by Don and Roger) and the up and coming men and women who are inheriting it.

And so the first episode of Mad Men’s 5th season ends not with Don settled into domesticity, nor with the landing of a new big account by Pete, or with the perfect piece of copy from Peggy—no, it ends with the world outside marching into Sterling Cooper Draper Price to demand recognition. The world of Mad Men, as it stands, will not survive. I for one am excited to see what grows out of it.