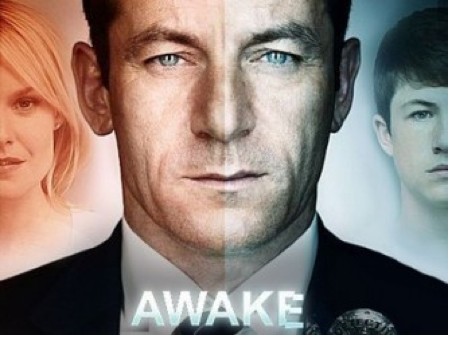 Awake, like a lot of this season’s hour long offerings, is a deeply ambitious show. In its pilot episode, it is also a thoroughly engrossing ride, and one that promises great potential from the serialized medium. Despite this incredibly strong premier (more on that later), I left the pilot with a sense of unease about where this series could possibly go, especially in a TV market that seems to demand shows stay on the air for as long as they are fiscally viable, rather than taking a bow once they’ve creatively finished.

But more on that worry wart stuff later. The Awake pilot is a truly great hour of terse, understated storytelling, and visually gorgeous to boot. The basic premise of Awake is that Michael Britten (Jason Isaacs) is in a car accident. After the car accident, Michael wakes up in two separate realities: one in which his son is alive and his wife has died, and one in which his wife is alive and his son has died. In each reality, he has a psychiatrist with a distinct personality helping him to work through the grief he should be feeling. In both realities, he struggles to rectify his grieving family with his work as a detective.

The true beauty of the pilot is in the crafting of Michael Britten and in the delicate weaving of his two realities. Maybe it’s just the comforting, nuanced presence of Jason Isaacs, but with very little in the way of expositional dialogue, Britten is immediately a complex individual in whom we are totally ready to invest. The master stroke is in how naturally they place him in his two realities. On just a visual level, the show has created distinct color palettes for each world. In the reality with his son, the colors are all muted blues and greens and non-direct sunlight. In the reality with his wife, it’s well-lit like a much less gritty show, and the world is filled with reds and pinks.

The episode drifts between each reality, with the two shrinks arguing for their own world. This should seem like a tired device, and if the show relies too heavily upon it in the future, it will quickly grow to be one. But in the pilot, it allows an expediency to the narrative, and a verbalization to the conflict brewing within Britten’s head. There are reasons for each reality to be considered the true one, and reasons why Britten at different moments in time should want each one.

Which leads us into my problems. For all the beauty of the cinematography and invention of the premise, I’m worried about the series’ ability to sustain itself. A mid-episode burst of self-destruction seems to argue in favor of the consequences of Britten straddling the two worlds, but at the end of the day it’s hard to see him actively choosing to give himself over to true tragedy present in both realities. As for the TV show, the tension of the pilot and the brilliance of it is all in the ambiguity, of not knowing which is the true world. When Britten explains to BD Wong’s confrontational shrink that he has no desire to get better, it speaks to the show’s lack of real push to resolve its central dichotomy.

On top of that, sustaining two completely believable worlds is tricky. So far, the son (played by Dylan Minette) feels infinitely more real and damaged than the wife (played by Laura Allen). For one thing, Allen is frankly too young to be playing the grieving mother of a 17 year old. Especially next to the gritty gravitas of Jason Isaacs, Allen does not seem up to the task of playing a woman who feels like she’s lost her son. It’s okay for Isaacs to play a sort of half-grief; his character hasn’t really lost anyone yet. But Allen should be almost overwhelmed by it, and so far she lacks the depth to be playing that level of sadness behind her eyes. It makes the wife reality feel less real, even if that isn’t intentional on the part of the show.

The pilot leaves a lot of brilliant little loose threads, even as it neatly wraps up it’s monster-of-the-week style detective case. The Tennis coach who’s helping the grieving father and son. The new partner (Wilmer Valderamma) who may be spying on Britten. The old partner who’s beginning to grow suspicious of the level of his partner’s grief. The tantalizing hint s that the accident may have been more Britten’s fault than he can allow himself to believe. There’s plenty of beautiful, painful drama to be mined out of this show. The extent to which it will succeed will depend upon its ability to utilize its premise without burning it out. As the audience, we obviously don’t want to have the two realities neatly broken into real and fake, especially not so soon. But for this show to really be worth our time, we also have to believe that they have a plan and a vision, and that they will show us more about Britten and the truth of his universe through the long term future of the show. Some of the central tension comes from the very real possibility that neither reality is true, that Britten has indeed lost both son and wife, and that his grief and guilt have locked him in between these two worlds. But this tension means nothing if the show does not have the narrative balls to risk it.

Awake, the pilot, is beautiful. I only hope Awake, the series, deserves it.