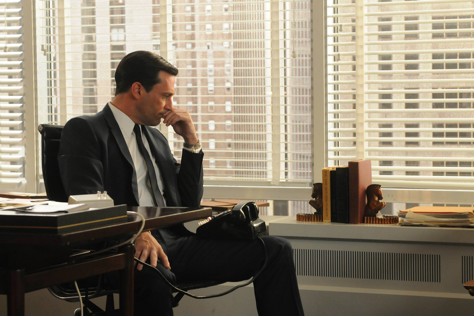 From Suitcases to Tomorrowland

“Who is Don Draper?” began season four of Mad Men. After the flat out rapturous season three finale that showed Don and other key members of Sterling Cooper throwing off the chains of corporate oppression in a frenzy of individualistic joy, the fourth season began months into the future, where the glow of doing something amazing was beginning to fade into the drudgery and pain of maintaining something amazing. Most of season four, therefore, followed Don down an even darker road than we have travelled with him before. His drinking went from archaically charming to disturbing, his work suffered from his scattered concentration, and, in the absence of a family life to come home to, he succumbed to being a lecherous lush, pawing meaninglessly at anything in a skirt that happened to be around him. The first half of the season was brilliant, sure, but it was also a slog through depression and misery.

Then came one of the best episodes of television, right in the middle of the season, titled “The Suitcase.” Not a whole lot happened in this episode, even by Mad Men standards. A seminal boxing match was won by upstart Casius Clay, and a different kind of fight led two characters to reevaluate who they are, where they came from, and who they want to be. While the rest of Sterling Cooper Draper Price was at the boxing match, Peggy and Don stay behind at the office to try and complete copy for a new account. Don’s downward spiral hits its head, as he cruelly berates Peggy while forcing her to miss her own birthday party. But Peggy is not a shy little secretary anymore; she’s a goddamn force of nature. When she chooses to miss her own birthday party, she’s choosing it. And when Don Draper is acting like a moron, consistently, she’s the only person who can get him to see how low he’s gotten.

When I first started watching Mad Men, in the spring of ’09, I was living with a bunch of roommates. One of them couldn’t stand the program, finding it so offensive to women that she often couldn’t sit still throughout a whole viewing. It seems absurd now, but she truly couldn’t see through the characters’ objectification and denigration of the women around them to the show’s actual viewpoint. I’ll admit, there were early episodes where I wondered what exactly this program believed in. I often found Mad Men a beautiful enigma, much like early seasons Don Draper. It looked really good, and occasionally hinted at this profound depth lurking underneath its glossy, well-lit exterior, but I couldn’t help but wonder if the core inside the show was just… lacking.

Which brings us back to the beginning: Who is Don Draper, and by extension, Mad Men? In “The Suitcase,” Peggy and Don batter that question back and forth, revealing seasons worth of relationship, understanding, and trust in each other, while also questioning a lifetime’s worth of insecurity, fear, and need. The two characters who hold up Mad Men are unquestionably Don and Peggy. Just as we see Don as a remnant from a past time being slowly swept away by the future, we understand Peggy to be emblematic of a future slowly and painfully taking shape. But the beauty of Mad Men is that the two characters are so much more than archetypes or symbols; it resists such easy, shallow contrasts. Peggy and Don are delicately crafted, deeply intertwined, strictly platonic soul mates.

The second half of season four saw Don attempting to wrest control back in his life. He stopped drinking so much. He started swimming. He attempted to repair his shattered relationship with his kids. When, in a moment of weakness, he sleeps with yet another secretary, we understand the change that has crept into Don’s life. He’s frank, caring, and sincere, utterly vulnerable rather than crudely craving the untouchable fruit. When he writes an op-ed in the NY Times about the evils of cigarettes in response/retaliation against Lucky Strikes’ abandonment of SCDP, it’s a moment of utmost clarity and precision, about self-determination over self-destruction. And when he ends the season by slipping a ring on the finger of the first woman he’s ever seen be nice to his children, it’s a new Donald Draper who glows with excitement in his office telling his colleagues.

Of course this wouldn’t be considered one of the best programs on television if it just ended there. It’s hard not to wax rhapsodic about Mad Men. The seriousness of the show, and occasionally pretentiousness of it, seems to cry out for in-depth analysis more than gushing, but the show is so well done that it’s hard not to let your glee in seeing a show just continually up its own game seep into your reviews. Nothing on Mad Men is ever simple.

The season finale of Season Four, titled “Tomorrowland” has a lot of truly lovely moments. Every scene between Don and his children is perfect. I’ve somewhat ignored what a huge presence she’s had on the season thus far, but Sally Draper (Kernan Shipka, who may be the best child actor of all time) has been a marvel all season long, and seeing her finally get the attention she wants from her father was touching and wonderful. It seems like every scene with Sally comes tinged with a faint edge of terror. During Season Three, the internet was abound with speculation that the show was going to go in a decidedly disturbing direction in terms of Sally’s relationship with her grandfather, and, despite the fact that it never happened, this season continued that trend of showing Sally in relatively ordinary situations while allowing the audience to feel Betty’s constant fear of what’s going to happen to her. Sally is a reflection of Don in more ways than one, with the deep-seated insecurities and beauty of her mother. Basically, she’s screwed. But we also know how different the world will one day be for Sally, and how exciting the “Tomorrowland” that she will inherit is.

A perfect companion piece to “The Suitcase,” the season finale sees Peggy as the only person to question Don. When she reluctantly ekes out that she’s happy for him, we see the first hints of a crack along the excited smile. As much as we want to believe (and as much as Don may want to believe) that this represents a new stage of Don Draper, the ominous words of his discarded lover ring throughout the episode, “I hope she knows you only like the beginning of things.” Don’s earlier middle finger to the tobacco industry WAS about redefining his name, but it was also about being a petulant child who rarely thinks further ahead than the next hour. Mad Men causes critics to vastly exceed their recommended word count because no moment means only one thing. As nice as it is to see Don smile, the continued engine of humanity that drives Mad Men keeps going and nothing is ever simple.

I’ve focused a lot on Don as I’ve tried to make sense of Season Four, which is all well and good as it’s his silhouette that made the show famous, but what has astonished me so much about this season has a lot more to do with the women around him. To go back to my short-sighted friend, it’s astonishing to think that I once questioned the ability of Mad Men to deal with its sexism problem. Mad Men is as much about the rise of Peggy Olson as it is about Don, that much is obvious. But it’s also about the changing of face of womanhood in the midst of the sixties. Betty attempts to determine her own fate, and marries a man who will let her do whatever she wants, but she’s still not happy. Joan, especially in early seasons, didn’t feel as career oriented or “new woman” as Peggy, but here we see her strive into her own right as a Senior Executive at the new SCDP. Peggy dances through the whole range of sixties culture, befriending a lesbian, exploring avante garde art, and taking drugs. And she shows up sexist coworkers by stripping naked and still being better at their jobs than they are.

But, again, it’s not as simple as women rise, old regime falls. In what may be my favorite Mad Men moment of all time, Peggy and Joan end the season finally putting behind seasons of squabbling and failing to understand one another. In light of Don’s rapture at his marriage, the two archly reflect on their own positions within the company and their own efforts to try and better their life.

JOAN
Well, I learned a long time ago not to get all my satisfaction in life from this job.

In a world that’s based 90% on bullshit- the bullshit they sell their clients, the bullshit they sell each other, and the bullshit they sell themselves- Peggy and Joan share a rare moment of reality. They’ve both tethered themselves to this job, this path, this company filled with man-children who drink too much and fall in love with anything that can mop up a milkshake without throwing a fit. Joan may be secretly pregnant (a development I’m not sure how I feel about), but she’s already played a mother to this group for years. And Peggy may still not have her own office, and may still feel jilted every time her professional accomplishments don’t amount to anything next to the domestic bliss she’s supposed to be craving, but she, in this one moment, is closer to reality than anyone else.

Mad Men ended Season Four in a very different place than it began. The question has been asked, and for the first time in the series’ run mostly answered. We know who Don Draper is. Most people even know who Dick Whitman is. The question is now, can he change? With all that we know of the decade to come, that question will define his continued relevance.

THROUGHOUT MAD MEN SEASON FIVE, WE WILL HAVE WEEKLY EPISODE RECAPS. WHICH WILL HOPEFULLY NOT BE AS ABSURDLY LONG AS THIS.