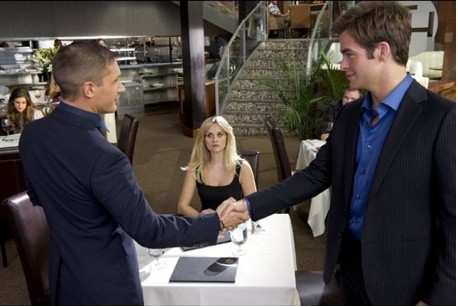 This Means Giggles, Despite Myself

There are many, many things that do not work about This Means War; check out Rotten Tomatoes, where the film is currently getting a 26% fresh rating. The movie is home to enough clichés to power about fourteen thousand post-modern comedies (like Friends with Benefits) about how clichéd romantic comedies are. The ending you can see coming from about ten minutes into the film (although I was hoping for a last minute swerve). And the character of Lauren is horrendously underwritten, using occasionally offensive romcom clichés to avoid having to actually create a character with “personality” or “flaws” or “noticeably human features.”

But there is one significant thing that does work: the film is a lot of fun. The chemistry between all three actors is strong enough to power through painfully bad scenes. Specifically, the friendship between Tom Hardy and Chris Pine makes this movie worth watching. Although the plot forces them to ping pong around ludicrously, Pine and Hardy bring a jovial ease to their friendship that helps to ground the more ridiculous stuff*.

My biggest problem with the movie was the character of Lauren, who, despite being played by incredibly game Reese Witherspoon, is pretty much a dud. At the beginning of the film, they flirt with having her be the typical uptight business lady, but that doesn’t really fit with the rest of her actions. And even her smartgirl talk with Pine’s womanizer doesn’t quite jive with someone so easily manipulated by trips to paintball ranges and dog pounds. It makes the romance stuff a lot less believable, and when the film devolves into a goo fest near the end, it makes it that much less palatable.

But at the end of the day, I got to see Pine playing his typical charming “bad” boy (like Kirk, with the same level of daddy issues but with less grounded idealism) and Hardy playing against type as a sensitive romantic (like his character in Warrior except the exact opposite. And with more punching). The jokes, when they’re working, work well, and there was at least one sequence of the film that made me laugh so hard my eyes watered. And Witherspoon, despite being handed a pretty empty character, is incredibly charismatic on screen, and it was nice to see that her trapeze training from Water for Elephants wasn’t wasted.

It’s not a great movie, or even really a good one, but This Means War is pretty fun for a Saturday afternoon when you have nothing better to do.

*Plus, it’s kind of stupid to complain about ludicrous plot in a movie about two spies who use the resources of the US government to try and spy on a girl and sabotage each other’s dates.  Sorry, hypothetical movie viewer, but you knew that was what the movie was about walking in.