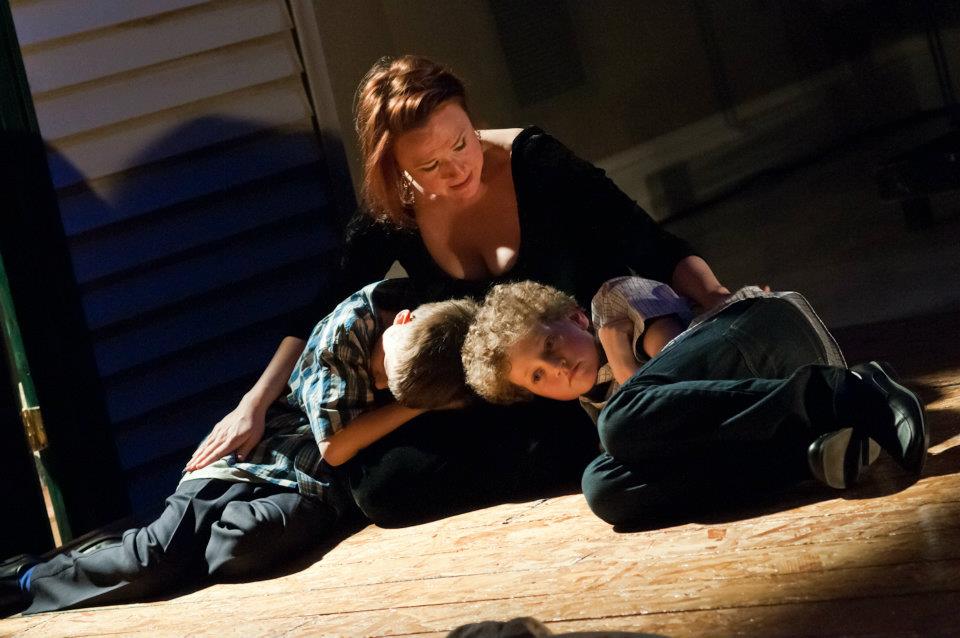 About a week ago, I had the good fortune of seeing the Actors’ Shakespeare Project’s Medea during a preview. I wanted to write my review up as soon as I got home, but it’s taken me about a week to figure out exactly what it was I wanted to say about it. The problem is, I just didn’t like it that much.

That’s not to say that it was bad. Quite the contrary, it was a well designed, well executed production. My only qualm was that it was a show that focused on the art of the production, creating abstract lighting and movements, symbolic blocking, and a very artistic feeling. Now, there’s nothing wrong with that, it’s just not what I prefer. I tend to like productions that focus on the story and leave the abstract out, but that doesn’t mean that I can’t recognize a good play that sues the abstract, and this production of Medea was certainly that.

Director David R. Gammons used a room in the Multicultural Arts Center (Cambridge, MA) for the show, upstairs from an art gallery, and it was gorgeous. The audience is arranged around a thrust stage, with a balcony ringing the room overhead, from which the Chorus begins the show with a Siren-like song and otherworldly movements, creating a clear message to the audience that they are about to depart from every day life.

The stage itself was fairly Spartan – raised floorboards lit from beneath through gaps, with a backdrop of a house front with doors and windows used as entrances and exits and to give a glimpse inside Medea’s home during the action. The floorboards were strewn with rocks and children’s toys, all of which serve a purpose during the show Not a single piece in the production is extraneous – each thing on the stage is specifically chosen and used.

The lighting and music choices were dynamic and striking. Lighting changes to reflect the action and Medea’s mood, changing rapidly from calm ambient white to harsh, furious red. The positioning of floor lights cast deep shadows on the backdrop, making the characters, especially Medea, literally larger than life as their shadows tower fifteen feet high behind them.

The actors involved in this production are exceptionally talented. Jennie Israel (Medea) strikes the very fine balance between being pained and disturbing. She is genuinely distraught by the thought of what she will do, but at the same time portrays cold, unfeeling remorselessness after having done it. Her sons (Adam Freeman and Jackson Wagner), local school children, are energetic and playful throughout the production, up until they are seen murdered through the windows of their home. Nigel Gore’s Jason is self assured and entertaining, a man who stays dynamic and engaged despite aging. They all do a fantastic job of presenting the play, despite using a translation that, in my opinion, lacks the poetry usually associated with Greek writings.

All in all, it was a solid production, just not my personal preference. I would certainly recommend it to people looking for a good show, but I would have to think about who it was I was recommending it to, as the artistic nature of this production might not appeal to everyone. But at any rate, Medea is a strong addition to an already excellent season from ASP, and it’s certainly worth a look.

Medea plays until March 4th in Cambridge, MA. More information about the show, including scheduling a ticketing information, can be found HERE.