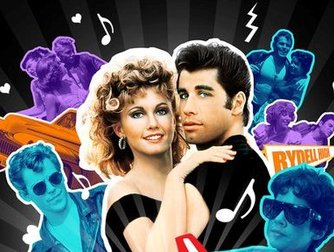 Singing Along with Grease

Chicago is the best movie-musical ever made,  Singing in the Rain is my favourite classic and I will always have a special place in my heart for the underrated gem that is the Madonna-Antonio Banderas-Jonathan Pryce version of Evita. But there’s only one film that’s “The most successful movie musical of all time!” and that’s Grease. It’s a phenomenon that’s easy to forget about when you spend years away from Rydell high, distracted by newer, more complicated fare, but that nostalgic rush of simplistic joy that comes with the “bum, badum, badum, ba do da do dum” opening of “Summer Nights” is a powerful thing.

Sing-a-long-a Productions is bringing back Sing-A-Long-A Grease for 4 shows at the TIFF Bell Lightbox February 24-26. Self-effacing comedian Shawn Hitchins gets the night started with audience participation training that’s funnily awkward but generally a very good time to go get some popcorn from TIFF’s under-equipped snack bar- between the how-to on basic hand-jiving and costume parade, the pre-amble to the film does more to annoy than encourage enthusiasm.

But once they finally start rolling the film, Sing-A-Long-A Grease is more fun than pretty much anything (especially mid-Oscar season when the cineplexes are busy showing Albert Nobbs and Shame). Adhering to house rules on standing for songs and girls only singing the girl parts is, thankfully, not enforced because maximum sing-a-long enjoyment comes only when everything is absolutely voluntary (and you’re singing loudly and distinctly out-of-your-range). The goodie bags full of props go largely ignored- though the balloons are a hoot during “Blue Moon” and the racing flags make for good keepsakes- and most of the instructions are forgotten completely (no one remembered to boo the villain, though my crowd did take great pleasure in “meow”-ing at Cha Cha). Most of the lyrics are along the bottom of the screen for those rare folks who don’t know it by heart (for some reason the title song doesn’t enjoy this treatment, even though it’s the one the audience probably knows the least) and one of the great pleasures of the evening is watching the creative annotations that go along with the subtitles- an animated cat comically taking the place of the word “pussy” in the dirtier-than-you-remember lyrics to “Greased Lightning” is just one example.

The folks in charge at Sing-A-Long-A Grease are trying a bit too hard. The only thing that’s not fun about the show is the stuff they do to try to make it more fun. But make like the Pink Ladies and ignore the authority figures and the event is a smashing good time.

Buy your tickets now at the TIFF Bell Lightbox ( http://tiff.net/gettickets )