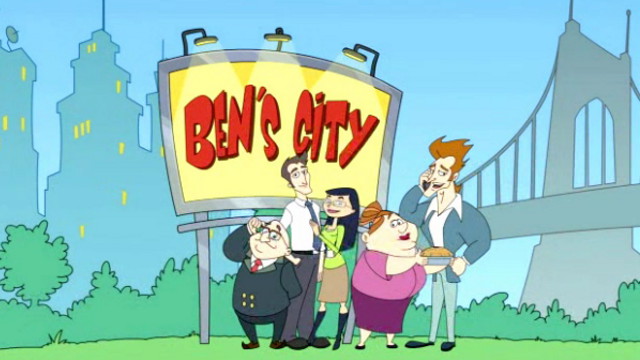 The pilot of Ben’s City sets up a wacky world full of conventional characters who live at a wonderfully refreshing pace. The dialogue is lightning fast , a style that is more than uncommon in animation and notably absent from most Canadian TV (which tends to favour sweet, accessibility over cutting smarts).

The cast of characters revolves around Ben, an handsomely designed “regular guy” who works for a faux pas-prone minister of the environment (the aptly named Mr. Wallet). His Johnny Drama-esque best friend Scott (funnier than he sounds) and his flighty girlfriend Sophie (who breaks up with Ben in the pilot via hundreds of post-its because “she needs space”) round out the main cast. Supporting wackadoo guests show up at every turn, like in a particularly fun scene at Sophie’s hair salon.

It’s a silly show, full of overreaching dialogue and caricature characters, but somehow the sum of those parts adds up to something that’s kind of awesomely different, challengingly fast and thoroughly entertaining.