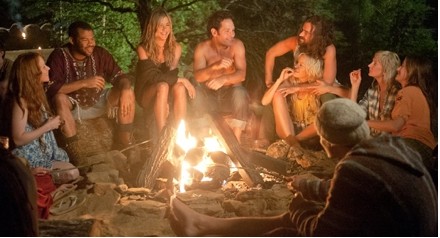 Rudd, Aniston and their Wanderlust

Wanderlust, the new David Wain (Stella, Wet Hot American Summer) comedy starring Paul Rudd and Jennifer Aniston, is a deeply funny movie, with laughs that run the gamut from the shocked “Oh Shit!” style laughter to the character-based chuckle. Unfortunately, despite its producer pedigree in the form of one Mr. Judd Apatow, it’s also a movie strangely missing heart.

Wanderlust follows George (Rudd) and Linda (Aniston), a Manhattan couple who lose all their money and end up stumbling upon a commune. The first 30 minutes of the film, which follow the couple as they first buy, then lose their finance-sinking apartment, and then as they go on a surprisingly true-to-grumpy-life road trip and run into the commune, seems to belong to a much better movie. It’s nuanced, and interesting, and Rudd and Aniston have a great, simple chemistry.

Then, the couple decides to permanently move to the commune.  Don’t get me wrong, the movie remains very, very funny, but from the moment they move to the commune, it begins to lose the character reality that makes these kinds of movies soar. Aniston’s Linda, in particular, is thrown around at the whims of plot. She goes from intelligent, if flighty, Manhattanite to an awe-struck, free-loving hippie without getting the requisite depth to anchor that transformation. The movie goes too far to break George and Linda apart, and it sacrifices the easy chemistry they had in the beginning.  It makes it a lot harder to swallow the absurdity that surrounds the couple, and practically impossible to buy into their third act reconciliation.

Paul Rudd could probably have chemistry with a potted plant, because he’s just that charming, and the glee of being able to watch George get into awkward situation after awkward situation never really wears off. There’s a particularly great, if potty-mouthed, scene where he tries to seduce a well-deployed Malin Akerman that’s a glorious testament to blue comedy. And Aniston, when she’s allowed to use her considerable romantic comedy talents, is clearly enjoying the absurdity of her situation. Given their early movie greatness together, it’s too bad that Linda and George have to spend so much time apart.

Justin Theroux and Alan Alda, as the de facto leaders of the commune, are joys to behold. Theroux, now famous basically for dating Aniston, is a great writer and a gifted comic performer (check out his bat shit performance in the under-rated Your Highness for more evidence) and he’s in his element here playing the stupid/deep hippy guru, Seth. Alan Alda, though, is nothing short of acid-addled perfection as the absent minded founder of the commune, playing off of his established leftie persona almost as well as he did playing Jack Donaghy’s real father on 30 Rock.

There’s a lot to enjoy in Wanderlust, which makes it even more disappointing that they couldn’t pull it all together. With this much pedigree and talent, there’s really no excuse for fumbling on the 10th Yard Line *.

*ooh, look, a football metaphor. If I wanted to get really grumpy, I could compare it to a certain New England team’s inability to hold onto the football despite having the best offensive line in the NFL.