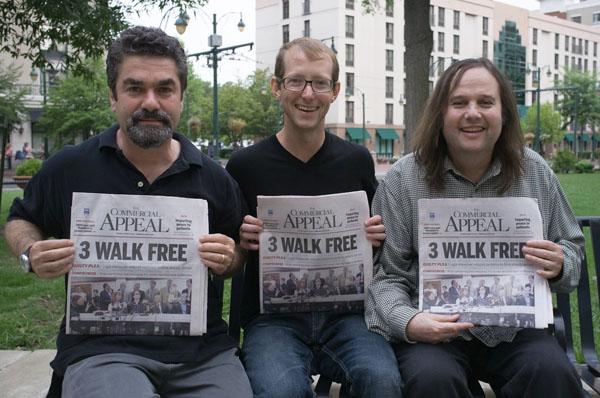 The Oscar-nominated third installment of HBO’s Paradise Lost documentary series is provocatively unsettling to watch. The crippling poverty, widespread ignorance, self-righteous rage and incomprehensible hatred that mark the Arkansas town of West Memphis made me shudder. You sit and you watch excruciatingly unedited crime scene footage from the murders at the centre of the story (those of 3 local 8-year-old boys), then you watch as three innocent boys are sentenced to life imprisonment or death- framed as murderers by such damning evidence as their taste in clothes and music- and the unspeakable tragedy perpetrated in West Memphis in 1993 doubles in size. It’s one of the scarier things ever put on film, the story of Damien Echols’ image and attitude-based arrest, of Jessie Misskelley Jr’s coerced false confession, of Jason Baldwin’s guilt-by-association for being a friend to Echols. The 18+ years of denied appeals and ignored evidence, and pathetic affair-ending plea that followed (the men were freed this past August with the understanding that they can maintain their innocence publicly but are considered guilty by law) serve as a call-to-arms for reform of the American justice system. But there are a brief few moments in the film that truly speak to the capacity of the human spirit, and it’s that light in the face of darkness that makes Paradise Lost 3: Purgatory more than wakeup doc.

Reading about Echols’ early years and watching footage of the trial, it’s clear that 18-year-old Damien was immensely troubled. His history with severe mental illness, his expression-less face, his morbid silence- they’re scary and make it unhappily easy to understand how he became an easy target for accusations of extreme violence. With every jump in time the documentary shows, Damien Echols thaws a little bit,  until his 2011 incarnation is revealed to be calm, thoughtful and in possession of a reassuring sense of hope. All that remains of the scary kid from 1993 is a stupid haircut, in his place is a buddhist poet and loving husband. Over the course of an unfathomable ordeal, Echols somehow managed to become a better man, a point that is never more clear than when he penned an apology letter to John Mark Byers, the adoptive father of one of the murdered boys whom Echols had once accused of being the true culprit.

For his part, Byers represents the citizens of West Memphis who found a way to see through their emotions. Riddled with and blinded by rage at the time of the trial, Byers was a full-throated supporter of the Echols-damning theories of satanic rituals. But as time wore on, despite being at one time suspected himself, Byers became a vocal supporter of the West Memphis Three, calling for justice on their behalf and remaining un-placated by their conditioned release.

The moment Echols, Baldwin and Misskelley take the Alford plea ensuring their release is the most emotional of the evocative film, mostly because of Baldwin. The most eloquent and impressive of the three men, Baldwin had had easily the most promising future at the time of his conviction and was accused for the most bafflingly inconcrete reason- his friendship with Echols. He closes the film with an impassioned and inspiring monologue about compassion in the justice system, but not before he agrees to plead guilty for no reason other than to save his friend’s life. Baldwin wanted out of jail with the understanding that he was innocent, he didn’t want the plea, but he sacrificed his freedom from the crime in exchange for Damien’s life (Echols was the only one of the three sentenced to the death penalty), as he touchingly states at the plea hearing, “they were trying to kill Damien, and sometimes you have to bite the bullet to save someone”. Echols’ emotional thank you to Baldwin, knowing the sacrifice he’s made, brought tears to my eyes.

Misskelley, so simple in thought, so tragic in misuse, created more problems than he could have imagined with his initial false confession that led to the arrests of Echols and Baldwin, but what stays with you from his statements about the confession is his motivation: he wanted the questioning to be over, so he could get home to his father. Upon his release, Misskelley doesn’t give a final interview, there’s no follow-up as he leaves, he just gets into a car with his father and gets to go home- it’s a really touching moment.

Finally, the presence of filmmakers Joe Berlinger and Bruce Sinofsky in a handful of scenes is a constant reminder of the observer effect at play. In a particularly affecting moment, Echols makes known his belief that had the original Paradise Lost film never been made, he might have been killed in prison and forgotten forever. Part of what Paradise Lost 3 observes is the influence of the original two films: they inspired legions of supporters, spurred the creation of fundraising organizations and the WM3 website, and brought the events to the attention of people who would become major players in finally getting the West Memphis Three freed. The story is a real testament to the power of saying something.