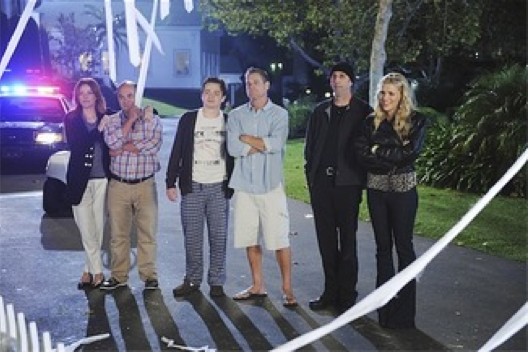 Back in the Cul-de-Sac of Cougar Town

I follow Bill Lawrence (@VDOOZER) on Twitter, as well as the fictional Laurie’s handle @TheLarmy (AND SO SHOULD YOU!), so there really wasn’t much of a chance I was going to forget that tonight featured the return of beloved sitcom Cougar Town. But with all the Twitter and geek-verse hype, there was a substantial chance that it wasn’t going to be as deliriously, snuggy-comfortable as it was when last I hung with the cul-de-sac crew.

Fear not, gentle wine sippers, for Cougar Town is just as good and worth the many months’ wait. The premiere episode of their third season features Jules fearing that she has become too predictable, some adorable Bobby and Travis (both dog and human) bonding time, and a cute side story featuring a demon toddler named Stan. Although it was short any plaintive cries of “penny can!” it was heavy on the emotions and humor that made Cougar Town’s second season one for the record books.

It’s hard to believe, at this point, that Cougar Town is still a show misperceived to be about foxy older ladies trying to do the horizontal shuffle with younger dudes, but apparently, in the parts of America that are not glued to the internet, it’s still a common misconception (See Here). Despite the, yes, awful, title, Cougar Town is one of the best comedies on TV. This Valentine’s Day treat of an episode should clear that crap up, as well as provide a refreshing look at just what makes this show work. Cougar Town survives on the strength of its relationships. It is the ultimate hang out comedy, where the point has less to do with plot mechanizations and more to do with how much we enjoy watching our characters get there. But it’s also one where we buy in, deeply, to the relationships on the show, and that made the last five minutes of this episode especially beautiful. So please watch it, because I’m going to be seriously bummed if this show gets canceled.