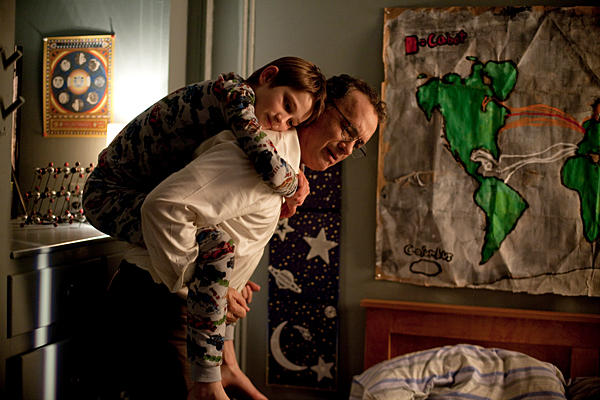 This was a tricky movie to make, no one’s going to argue that. There’s never been more sensitive ground for modern American filmmakers to tread than the memory of 9/11. But Extremely Loud and Incredibly Close should have moved me. It made me cry, I’ll admit to that, but it didn’t move me- and yes, there is a difference.

Sure, it was a bit cathartic, at the very least it had to be cathartic, but what I wanted was a story about the universality of grief and loss and story. I wanted to be moved to tears by the capacity of the human spirit, not by a guilt trip, an awkward silence and unrelated fond memories of Tom Hanks.

Extremely Long and Incredibly Predictable is not a terrible film. Were it a nice, normal February release I might even call it a nice, normal, sweet but mildly flawed feature that was somewhat long and predictable but in no way offensive. But that’s not what it is, it’s an Oscar nominee now (Best Picture, no kidding) and whether it should be or not, Extremely Loud and Incredibly Close is officially a piece of “very serious art”. I think we should be telling stories about 9/11, we should be crawling out from under it, paying homage to those who are gone and admitting how it’s changed western attitudes for the foreseeable future. We should also be less afraid of setting people off. Honest storytelling doesn’t happen on hallowed ground, and Extremely Loud and Incredibly Close seems nothing more or less than scared to say something wrong. And out of that trepidation is born a film that has nothing to say about grief, loss or anything really. So what it feels like is a manipulative grab at my tear ducks when what it should have been doing was aiming for my heart.

The plot itself (about a young Jeopardy winner on a mission to preserve Forrest Gump’s memory after his death) is full of uber predictable twists that any half-observant filmgoer would guess an hour before they’re supposed to. The score serves as an emotional roadmap, guiding the audience towards exactly what they should be feeling at that particular moment- which more or less just made me want to rebel against said map. Big names in small roles are always fun (John Goodman, Viola Davis), except when they inadvertently point towards whom out of the crowd will be the key to the story (hint: it’s always the Oscar nominee!). The performances are generally good- especially from Tom Hanks, perfect casting if you need the audience to really care about a character who’ll be gone minutes after the previews end- but that just made me sadder that all that sentimentality led to an exploration of just more sentimentality (and impressive crying from Sandra Bullock). Thomas Horn plays our main heroic kid with perhaps a bit too much emotional vulnerability to really sell the possible Aspergers that makes sense for the character, but he fares pretty well for a young kid with that heavy a movie on his shoulders.

There’s a moment near the end of Extremely Loud and Incredibly Close when Oskar (Horn) remarks that all the people he spoke to on his quest to find the lock that fits a key he found in his father’s closet “all had stories, they’d all lost someone, just like us”. That should have been the point of the movie. That all these people (and, frankly, all THE people) have their own version of Oskar’s grief and, for the most part, the kindness they showed him was triumphant. And the kindness so many people find so many ways to show each other every day is triumphant. But that wasn’t the point of this movie. Or if it was then the filmmakers missed their mark dramatically. This was about the horrors of Oskar’s personal grief, the horrors of what was taken away from the world on “the worst day” (what Oskar calls 9/11). And while I appreciate that the story was more about Oskar’s need to believe in his father’s adventure than it was about where that adventure led, the film needed to find a way to move Oskar through the stories of the people he met along the way. As it was, they somehow became plotpoints in an exercise to stir the grief of a world otherwise determined to move on.