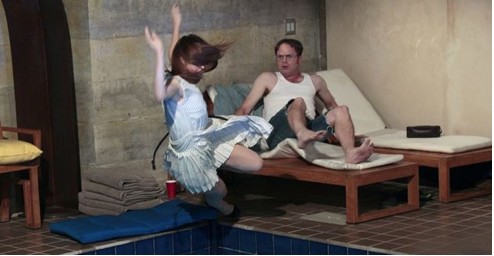 I sort of find all of the Office naysayers tiring (and I’m not just saying this because I desperately want Mindy Kaling to be my best friend). Since Steve Carell left, the internet has been full of people ready to proclaim The Office dead. Hell, BEFORE Carell left, most people agreed that the show was way past its prime. I never really saw that. I saw a TV show that had lost a bit of the “it” factor shine but continued to bring laughs and heart, and distinguish itself as a distinctly American take on the drudgery and optimism of the average American life.

Which is all to say that last week’s Office might have been my least favorite ever.

I’m a fan of wacky. I just wrote a whole article about how great and wacky Happy Endings is. I would never complain that 30 Rock doesn’t take place in the realm of reality (although, seriously Lemon, if you lock down James Marsden you do not complain that he doesn’t have a job. COME ON!). I don’t worry that the characters on Its Always Sunny are acting inhuman. But I expect The Office to temper its wackiness in trenchant observations and character-based drama.

Instead, tonight’s episode brought all our characters to their worst point without any of the thematic or metaphorical brilliance it once would have reserved for the experience. Honestly, I spent half the episode feeling like Jim, desperately wanting out of this wildly inappropriate party. It turned Erin into a schemer, if incompetently so. Ryan and Gabe, never characters known for their likability, played their sycophantic hearts out way past the point of amusement. And poor, poor Robert California, who until this point had served as a subject of mystery and interest, only to emerge from this episode fully formed as a creepy, orgy-obsessed, employee-flashing bitter divorcee.

I don’t want to chalk it all up to Michael leaving. The show has had good episodes since Michael’s departure, even a few that bordered on greatness. And at times, it seems like other characters have stepped up to that void. But in the absence of Michael, the show still feels untethered, and with the additional absence of Pam (as Jenna Fischer, selfish woman that she is, takes her maternity leave) it feels kind of lost. Add to that the move from the Office to Robert California’s creepy bachelor pad and you’ve got an episode that technically features all the characters from The Office, but feels like it’s from a different show. Ed Helms and Andy Bernard may be the technical leads of the show, but it functions best when it feels like an ensemble where all the characters at least resemble slightly flawed human beings, rather than cartoonish exaggerations.

There were some good moments. In particular, I liked the cold open, with Jim trying to get Stanley to laugh at his pranks on Dwight, only for the pranker to become the prankee. I liked the character-specific comedy of it: Jim desperately wants to be the beloved class clown, so he’s willing to dumb down his antics if it means he gets a laugh. And Dwight and Stanley want meatballs. That’s it. Nothing fancy or highbrow, just a well-played piece of incredibly specific character comedy. If only the rest of the episode had been a part of THAT show.